131 - US States Renamed For Countries With Similar GDPs 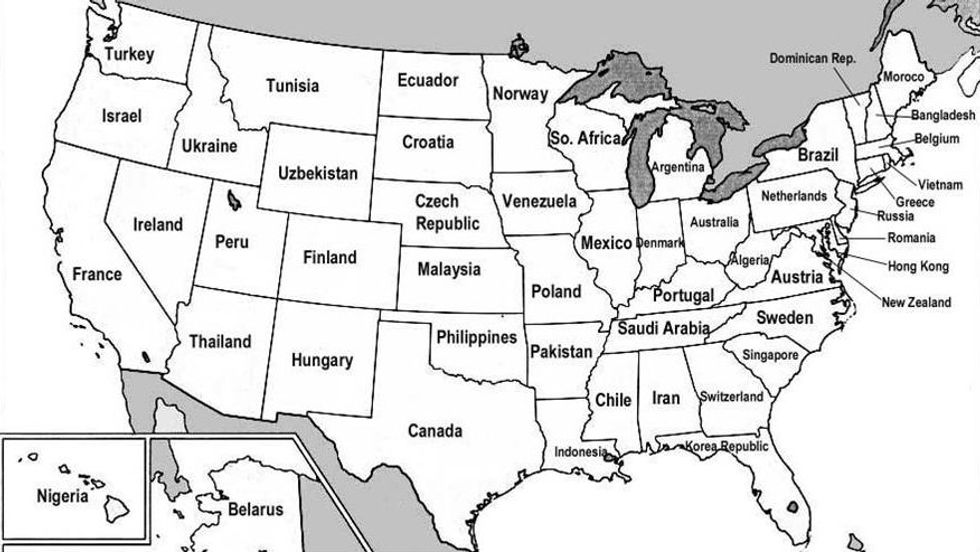 Gross Domestic Product (GDP) is a convenient way of measuring and comparing the size of national economies. Annual GDP represents the market value of all goods and services produced within a country in a year. Put differently:

Although the economies of countries like China and India are growing at an incredible rate, the US remains the nation with the highest GDP in the world – and by far: US GDP was projected to be $13,22 trillion (or $13.220 billion) in 2007, according to this source. That’s almost as much as the economies of the next four (Japan, Germany, China, UK) combined.

The creator of this map has had the interesting idea to break down that gigantic US GDP into the GDPs of individual states, and compare those to other countries’ GDP. What follows, is this slightly misleading map – misleading, because the economies both of the US states and of the countries they are compared with are not weighted for their respective populations.

Pakistan, for example, has a GDP that’s slightly higher than Israel’s – but Pakistan has a population of about 170 million, while Israel is only 7 million people strong. The US states those economies are compared with (Arkansas and Oregon, respectively) are much closer to each other in population: 2,7 million and 3,4 million.

And yet, wile a per capita GDP might give a good indication of the average wealth of citizens, a ranking of the economies on this map does serve two interesting purposes: it shows the size of US states’ economies relative to each other (California is the biggest, Wyoming the smallest), and it links those sizes with foreign economies (which are therefore also ranked: Mexico’s and Russia’s economies are about equal size, Ireland’s is twice as big as New Zealand’s). Here’s a run-down of the 50 states, plus DC:

This map was suggested by Morgan via strangemaps@gmail.com, and can be found here. Please note that the GDP data used for this comparison are not necessarily the same as those used in compiling the original map.

Update: Strange Maps is happy finally to be able to give credit where it is due. As was pointed out to us, this iconic map was conceived by Earl Fry, professor of political science at Brigham Young University, for the Globe and Mail in Toronto. Prof. Fry has since produced a number of updated versions of this map for the Canadian newspaper.