You should take a look at a website called www.motorwaymap.co.uk for an elaborate diagram of Great Britain’s motorways, along the lines of post #75 on this blog, showing a streamlined diagram of the Eisenhower Interstate System reminiscent of subway maps. The UK motorway map is a bit too big to show here in great detail, but an equally interesting map on that site represents a ‘boxed’ view of the UK, visually demonstrating the UK postal area codes. Many thanks to Gerald Higgins, the creator of the motorway map, the postal code map (and other interesting ones) for pointing them out to me.

Postal codes in the UK are called ‘postcodes’, and were introduced from 1959 to 1974. Most big cities already had postcodes – London was first divided into 10 postal districts in 1857-’58 and subdivisions were numbered in 1917 (e.g. W1, SE2, etc.) London still retains this system, while pre-existing city postal areas elsewhere were incorporated into the new system.

Outside the London Postal Area, UK postcodes have an identical format, generally consisting of two sets of characters separated by a space:

The out code is used to send the mail to the destination sorting office, where the in code is used to sort the mail into delivery rounds. This code is a hierarchical system, the first letter(s) denoting the largest area, the rest of the characters steadily defining the exact location of the address – be it a street, part of a street or even a single building. There are 124 postal areas, 3.064 postal districts, 11.598 postal sectors and 1.780.000 postal units in the UK. And some 27 million individual addresses. 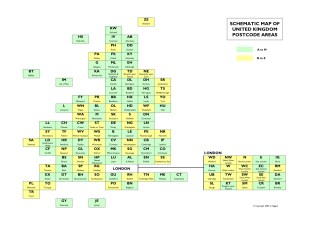 The letter(s) in the out code give some clue to the geographical location of the address, with one notable exception: SAN TA1 is the postcode for correctly addressed letters to Father Christmas. Some other interesting specific postcodes in London: SW1A 0AA (House of Commons), SW1A 1AA (Buckingham Palace), SW1A 2AA (10, Downing Street, Prime Minister’s Office). The Channel Islands and the Isle of Man adopted postcodes only in the early 1990s, following the UK format: JE (Jersey), GY (Guernsey) and IM (Isle of Man). IM is sometimes replaced by EV (Ellan Vannin, the island’s name in its native Manx language).

Other British overseas territories have separate postcodes, often to eliminate confusion. ASCN 1ZZ is used for Ascension Island, as previously mail for the island often ended up in Ascuncion, Paraguay. Similarly, STHL 1ZZ prevents mail for Saint Helena in the South Atlantic from going to St Helen’s in Merseyside.

If you find yourself on one of these roads, it might be a while before you see another fellow traveler.
Up Next
Strange Maps

When Maine Went to War over its Northern Border

The ‘bloodless’ Aroostook War is variously said to have cost the life of a cow, a pig, or a single U.S. private.