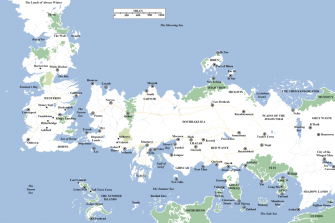 Warning: if you haven’t caught up, mild spoiler ahead.

Meanwhile, hell is hard to avoid. When it comes to following GoT, I’m on Team Arwa (a.k.a. Team Stewart) but even we have heard rumors about a sudden bout of genocidal mania, and Daenerys perhaps no longer being such a good baby name.

Fortunately for map nerds, GoT’s dense plotting also extends to its topography. Just like the series’ peoples, protagonists and events — often borrowed from actual history, then slightly altered — its fictional map is more than loosely based on ours. 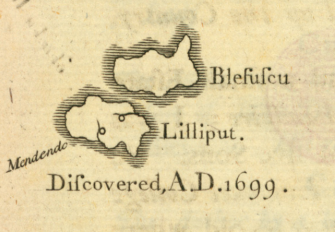 Fantasy locations have been a literary device at least since Plato spun his stories about Atlantis, back in the 4th century BC. From Plato only a description of the island survives, more recent tales of fictional geography came with a map: Thomas More’s Utopia, Jonathan Swift’s Lilliput (and other islands visited by Gulliver), and Robert Louis Stevenson’s Treasure Island.

The watershed fantasy map, the one that spawned a thousand imitations, is the map of Middle-Earth, created by J.R.R. Tolkien himself (from the 1920s to the 1940s): as the endpapers to the Lord of the Rings trilogy, they framed the wanderings of the Fellowship, the movements of armies and heroes, and the deep history underlying the narrative.

“I wisely started with a map and made the story fit,” Tolkien once quipped. George R.R. Martin did it the other way around: he envisaged the opening scene of the first book of A Song of Ice and Fire (the book series adapted as GoT) and built the tale — and the world around it — from there. 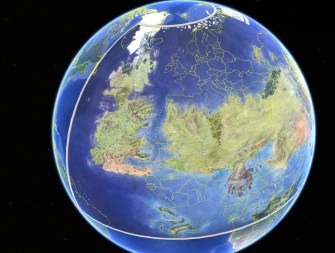 Mighty Westeros side by side with tiny Britain. Image source: Imgur

Not just a badly drawn Britain

Only then did he take on the mantle of the First Cartographer, and it’s his hand-drawn maps that appear in the books. Another similarity with Tolkien, whose fantasy world was inspired by real geography was that Martin also drew his world with one eye on the map of Europe, and especially the British Isles.

Most of the action, in the books and the series, takes place on the continent of Westeros (there is a whole Known World out there as well). There’s an obvious parallel with Great Britain in the Wall in the North: at 700 feet high and 300 miles long, it is a clear extrapolation of Hadrian’s Wall (a mere 73 miles long, and never higher than 20 feet).

Westeros is much bigger than Britain, though: about 3,000 miles from the Wall to the south coast, about six times the distance from Aberdeen to London. But Westeros is not just a badly drawn Britain, nor a mirrored version of its land mass (two popular theories). Things click into place — literally — if you do the following:

Take Ireland, turn it on its head, inflate it by about a third, and stick it to Britain’s bottom (via a new land bridge called The Neck). And hey presto, there’s Westeros.

Game of Thrones’ Westeros is the UK and Ireland upside down!

Britain and Ireland, joined at the – ahem – south coast

In fact, Martin admitted as much at the 2014 Comic–Con: “If you want to know where a lot of fantasy maps come from, take a look at any map in the front of your favorite fantasy book and turn it upside down. Westeros began as upside-down Ireland. You can see the Fingers at the Dingle Peninsula.”

This has some implications for the (presumed) parallels between locations in Westeros on one side, and Britain/Ireland on the other. For instance, King’s Landing, the capital of Westeros, corresponds to Galway rather than London.

But such correspondences are futile. Each borrowing from actual history and geography is given a little twist, so people can argue until they’re blue in the face whether the Red Wedding was inspired by the St. Bartholomew Day’s Massacre or by the Black Dinner, whether the Dothraki are the Huns or the Mongols, and if Winterfell is Manchester or Leeds.

For some, King’s Landing is reminiscent of old Constantinople. In the TV series, the old walled cities of Mdina (Malta) and Dubrovnik (Croatia) stand in for the capital. And Martin himself dreamt up the teeming city remembering the view of Staten Island from his childhood home in Bayonne, New Jersey.

For some, that tension with “real” history and geography adds a layer of enjoyment to GoT. Team Arwa can feign interest in a cartographic discovery that hardcore fans have made years ago, and will be happy only when the last dragon has finally landed.

Many key inventions were unique: one-offs.
Up Next
The Present

Tinnitus and the deafening problem of noise pollution

Hearing-related problems are on the rise.