Roughly one out of every five humans will suffer from tinnitus at some point in their lives. Though this ringing in the ears isn’t a condition, but a symptom—of an ear injury or age-related hearing loss—the problem is widespread. A range of treatments, from symptom-relieving supplements to sound wave therapy, are being sold in a growing market. But the causes aren’t being addressed nearly as ambitiously.

At least one major cause, that is: noise pollution. A recent New Yorker article suggests noise pollution is a candidate for the “next big public-health crisis,” though it’s in stiff competition with smartphone addiction, opioids, and the physical and mental health consequences of student debt. According to the CDC, hearing loss is the third-most common physical condition affecting adults (after hypertension and arthritis). Twelve percent of the working population experiences hearing difficulty in some capacity.

Twenty-two million workers are exposed to hazardous noise every year in America. In the manufacturing sector, which accounts for 13 percent of the national workforce, occupational hearing loss is the most common work-related ailment. One of out every nine recorded illnesses are due to excessive noise.

Cities are wonderful places, but they produce chronic physical problems. In The Great Animal Orchestra, soundscape ecologist Bernie Krause notes that urban noise levels in America increased by 12 percent between 1996 and 2005, with over one-third of citizens complaining about noise levels.

Intrusive sounds affect us far beyond the inconsiderate motorcyclist and construction workers jackhammering sidewalks. Krause writes that what we hear is profoundly affected by what we see; in dense urban areas, we’re assaulted by imagery on a daily basis. We might grow to believe filtering background noise is easy, yet the interference of ambient (and not quite ambient, but outright offensive) sounds disrupt our attentional capacities and nervous system.

Trying to filter unwanted sounds creates a chemical spike in our bodies. Glucocorticoid enzyme levels rise by as much as 40 percent when we’re separating noise from signal, resulting in fatigue and stress. As Krause writes, “even moderate noise in a workplace caused measurable exhaustion, blood pressure elevation, and negative attitudinal shifts after only a few days of exposure.”

We become accustomed to these elevations—sort of—yet the chronic interference damages our health. For example, increased blood pressure and stress hormones from noise pollution have led to an uptick in heart attacks in people assualted by higher decibels on a regular basis.

We’re not only destroying our own health, but that of the planet. Consider the ocean. Krause writes that social vocalizations enforce group cohesion across species. Toothed whales send out what marine biologists term a “big bang,” a “highly focused eruptive beam” that stuns prey so that whales expend less energy chasing food. Snapping shrimp emit sound so quickly that target fish are rendered incapacitated, another adaptation that makes hunting easier. 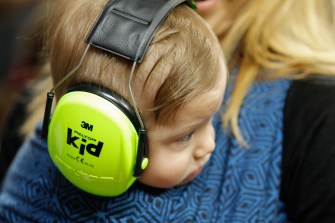 These sonic adaptations are targeted attempts to survive in the animal kingdom. Yet human intervention is unique, and not in a progressive manner. A Canadian organization notes that underwater noise pollution is threatening the existence of species of whales that evolved in quieter oceans. Our impact thwarts their navigational abilities, injuring or killing entire populations of marine life and disrupting mating calls. Turns out there are many ways to destroy a population. Carbon is not the only catalyst for environmental degradation.

Noise damages our ears at 85 decibels; most concerts are downright deafening, climbing to 110-120 decibels. Even restaurants now match or surpass that level. Architecture and design critic, Kate Wagner, wonders how public spaces designed for eating have allowed so much noise to ruin our dining experiences.

What’s good for an establishment’s bottom line—increased noise forces quicker turnover and higher alcohol consumption—is adding to the problem. During various meal times in Baltimore and New York City, she measured noise levels: “80 decibels in a dimly lit wine bar at dinnertime; 86 decibels at a high-end food court during brunch; 90 decibels at a brewpub in a rehabbed fire station during Friday happy hour.”

Is the antidote a $500 sound therapy machine? A relaxation app designed to combat tinnitus? Expensive (and often unproven) herbal treatments? At the moment, there is no cure for noise-related hearing loss. Owen writes that regulations could be enforced to reduce manufacturing and shipping noise, but that requires governmental intervention. In America such enforcement doesn’t appear to be very high on the list.

In certain situations, governments are adding to the problem. That’s the assessment of a Washington community fighting noise pollution created by fighter jets, for one. As with many technological advancements, the private sector is contributing in its own way. For example, the creation of electric vehicles, especially Mack trucks and other industrial-scale vehicles, though that too comes with its own problems. Ever since mobility services expanded beyond the horse and buggy we’ve created as many problems as we’ve solved.

While an inconvenient truth, humans are simply mismatched for the environment we’ve created. In our ascension to apex predator—especially post-Industrial Revolution—we’ve become especially adept at destroying ourselves and other species (except jellyfish). Carbon emissions receive top billing in climate change discussions, yet many other factors are chipping away at the fabric of existence. So little signal left, so much noise ruining the soundscape.

All marbled crayfish descended from a single clone discovered in Heidelberg, Germany in 1995.
Up Next
Creativity

Peer pressure is a powerful thing, even for adults. In his Big Think+ video, “Generate Better Conversations,” economist Tim Harford tells the story of an instructive study done in the […]