Despite accusations of racial stereotyping, most Dutch cities and towns keep the traditional blackface version of 'Zwarte Piet'. 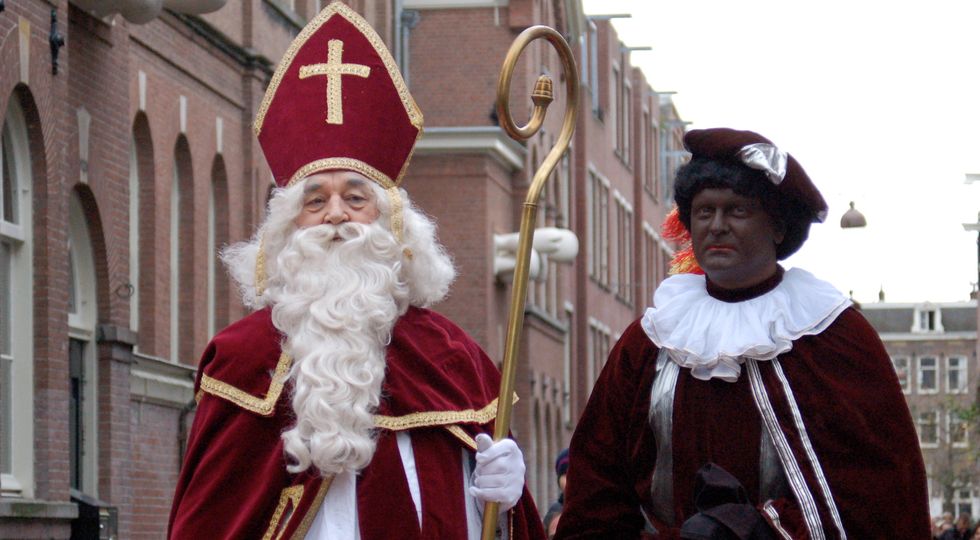 The Netherlands may not have any Confederate statues to pull down, but the country has its own racially charged issues with its past and its cultural institutions – most notably these days the controversy surrounding Zwarte Piet.

'Black Pete' is the servant of Sinterklaas, a Dutchified version of Saint Nicholas and the spiritual ancestor to Santa Claus. Sinterklaas on his grey horse and Zwarte Piet with a bag of gifts traditionally roam the nation's rooftops in the night of 5 December. They deliver candy and toys down chimneys to kids who have been good all year long. However, if they've been bad, they risk a whipping by Zwarte Piet – or get a lump of coal instead of a present.

The association of Saint Nicholas with Spain (whence he comes every year, by boat) and with a servant of apparent Moorish extraction is a fairly recent tradition, emerging from a re-telling of the Sinterklaas legend in a book by an Amsterdam school teacher in 1850. Zwarte Piet's appearance and name were standardised as late as the 1920s.

For Dutch kids during the rest of the 20th century, Zwarte Piet was a fixture of the festive season, an exotic distributor of sweets, a thrill enhanced by his (increasingly theoretical) power to whip those undeserving of candy.

But that was then. Gone are the days when the Netherlands was an exclusively white society, in which few were bothered by Piet's caricaturesque persona: a good-humoured and obedient servant in big curly wig, huge red lips, giant earrings – and of course personified by a white person in blackface.

Mainstream culture has tried (and mostly failed) to counter the increasing view of Zwarte Piet as an offensive grotesquery. In some versions of the story, Zwarte Piet is a former slave, serving Saint Nicholas in perpetuity as thanks for his liberation. Others say Piet is black only because of the chimneys he goes down – although that does not explain the frizzy hair and other attributes which complete the racial stereotype.

In recent years, Dutch people of colour (and others) have started taking umbrage at that stereotype. In 2011, a movement arose to do away with the blackface caricature, and with the power dynamic between white master and black servant as a hangover of colonial attitudes.

The discussion about the colour and position of Zwarte Piet revealed huge fault lines in Dutch society – mostly along racial lines. More than 90% of white Dutch perceive Black Pete as a figure of clownesque fantasy, rather than as a colonial-era stereotype of slavery. But in multi-ethnic cities like Amsterdam, up to 50% of the Surinamese community surveyed consider Zwarte Piet to be an exemplar of discrimination. A further 27% felt personally affected by this.

So the battle lines are drawn: for some, Zwarte Piet is a cultural icon, and not up for discussion; for others, he is a racist symbol, and cannot survive in a multicultural society. The obvious compromise between rigid maintenance and total banishment is to change Pete's appearance. The range of alternatives: Petes in blackface but without the wigs, earrings and big lips; Petes without makeup; Petes with makeup in other colours; or Petes with soot streaks on their faces.

So what does the Pete-ography of the Netherlands look like this year? The Algemeen Dagblad (AD) and a number of affiliated newspapers surveyed 272 of the country's 388 communes for the colour of the Petes in their traditional Sinterklaasintocht (the annual carnivalesque entry procession of Sinterklaas and multiple Petes into each commune, celebrated in the weeks leading up to 5 December).

As this Pietenatlas shows, the overwhelming majority of communal committees (239, in brown on the map) have decided to keep their Zwarte Pieten black (or dark brown). In a relatively small number of communes (17, in yellow on the map) traditional (Black) Petes are accompanied by so-called roetveegpieten -  'Sooty' Petes (streaked with black as chimneysweeps would be – but not actually black themselves).

Only three communes (in red) have banned Black Petes altogether and replaced them with Sooty Petes instead. These communes include Amsterdam and The Hague, the first and third-biggest cities in the land. Rotterdam, the second-biggest city, had not yet announced the colour of its Petes when this map was made. A few days before its procession on 18 November, the relevant committee announced its Pietenbesluit (Pete Decision):

“Pete will no longer be represented as stupid, clumsy and talking with a funny accent, but as a rounded individual and full-fledged aide to Sinterklaas. He will no longer wear earrings or have red lips, nor will he have frizzy hair or uniformly black skin. He will become a Sooty Pete: dirty from crawling through chimneys to deliver presents”.

A number of Sinterklaas committees did not contribute to the AD survey for fear of igniting controversy in their communities (in white on the map) – or because like Rotterdam they too will only decide at the latest possible moment which colour their Petes will be (in grey).

As this map shows, the Pete problem has not yet been solved. The number of communes with Sooty Petes in their procession has actually gone down, from 21 last year to 20 this year. The main changes have been made in larger cities, those with sizeable non-white populations. But in smaller cities and towns, AD says the Sinterklaas committees indicate the Pete problem “is not an issue”. Most people don't ask for 'different' Petes, some sponsors even insist on 'traditional' ones.

And there is a practical problem with Sooty Petes: being covered in just a few sooty streaks makes the actors too recognisable to the locals – which dispels the fiction that Sinterklaas and his helpers actually came from faraway Spain.

The AD cites Pete experts Jop Euwijk and Frank Rensen, who think the increased range of options will eventually lead to regional and local divergences in the appearance of Petes. So this map may look a lot more colourful and diverse in the years to come.

Map found here at the Algemeen Dagblad. Many thanks to Ursula Daxecker, A.C. and Dr Mike Medeiros for pointing me to this map.