In most countries around the world, some jobs are by law reserved for men only and forbidden for women. 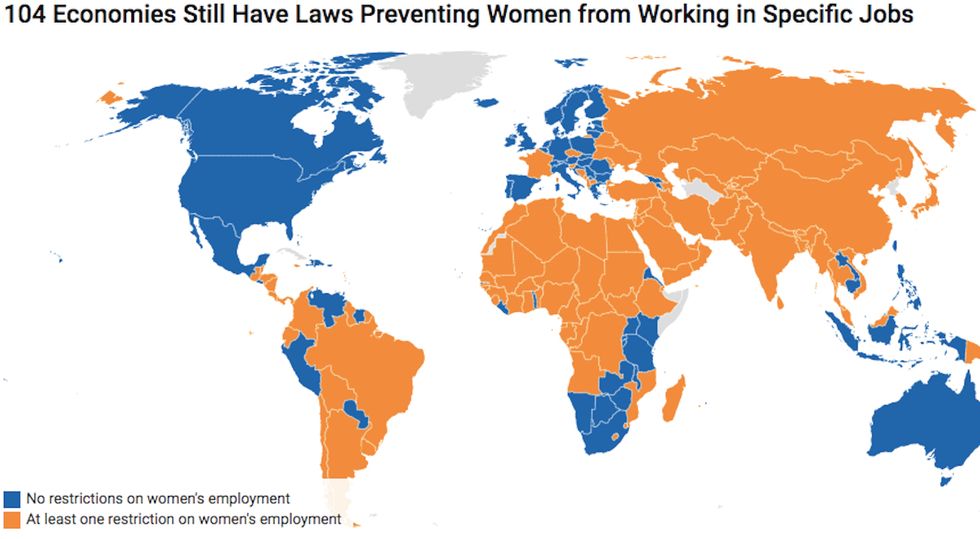 In most countries across the world, women face legal restrictions on the types of job they're allowed to do

When it comes to employment, there's more than the gender pay gap holding women back. In most countries around the world, some jobs are by law reserved for men only and forbidden for women.

For its 2018 edition, the World Bank publication Women, Business and the Law focused on legal restrictions on female employment and found that this 'gender employment gap' existed in 104 out of 189 economies around the globe.

In absolute figures, this means that over 2.7 billion women are legally restricted from having the same employment choices as men.

One of the individual cases mentioned by the report is that of Svetlana Medvedeva, a Russian woman whose ambition to become a ship's captain led her to study navigation. She graduated as a navigation officer, only to be told by one potential employer that, under Regulation No. 162, ship's captain is one of the 456 jobs in Russia deemed too arduous, harmful or dangerous for women.

She sued the company but the court held that, as intended by said regulation, the protection of her reproductive rights was more important than her right to the job of her choice.

Svetlana received a nyet all the way up the judicial chain in Russia. Only after the U.N. Committee on the Elimination of the Discrimination of Women found in her favour did a Russian district court agree, in September 2017, that she had been discriminated against. However, the court did not order the company in question to hire Svetlana or to compensate her, and Regulation No. 162 remains in full effect in Russia.

This map, produced by The Economist, provides a glimpse of some of the specific restrictions in selected countries.

Possibly examples of the 'arduous' category:

These must be too 'hazardous' for women (esp. with regard to their reproductive capacity):

And finally, some night-time restrictions:

Most mature economies have no restrictions on female employment, but there are exceptions; notably France, the Czech Republic and Slovenia (insert Melania joke here).