The U.S. is Cow Country, and other lessons from this land use map

America's corn syrup fields are big enough to cover all its airports and railroads, and other surprising lessons from a 'tidied-up' map of America's land use zones 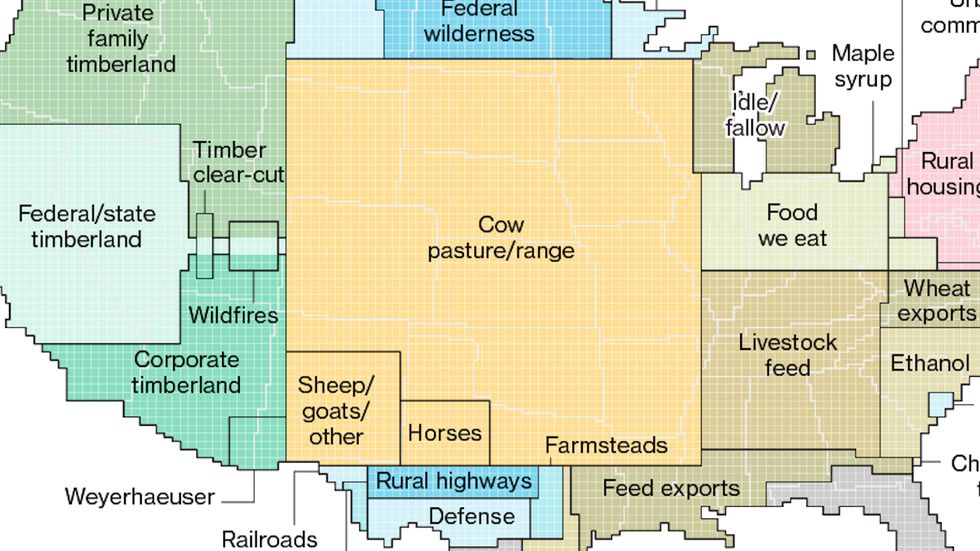 About 41% of all land in the coterminous U.S. is dedicated to cattle

Yes, this is America. The borders are all new, but the areas are correct; this is a map of land use in the contiguous United States, each category corralled into a homogenous rectangle. As you can see, humans have a minority stake in the nation. The U.S. is Cow Country.

Of course, this is not what America really looks like. The 1.9 billion acres in the coterminous states are a coast-to-coast jumble of residential areas, industrial zones, farmlands and more. This map gives all that the Ursus Wehrli treatment.

Mr Wehrli is a Swiss artist with an obsessive-compulsive bent. He produces before-and-after images of, among other things: alphabet soup, alphabetized; a parking lot full of cars, rearranged according to color; or René Magritte's famous It's raining men painting (1), with the bowler-hatted gentlemen lined up in three size categories.

The results are strangely satisfying 'tidied-up' images, and so is this map, regimenting statistical data into coherent cartographic cohorts. It doesn't even look too much out of order, given that most U.S. states are at least partially rectangular in shape anyway. The result: an illuminating overview of land management in the Lower 48.

The map is based on the six major land use (MLU) categories as defined by the U.S. Department of Agriculture, but also shows various subdivisions.

Judging by land use, the U.S. is dominated by cattle. More than one-third of the area of the contiguous states is given up to pasture—more than any other land use type. Most of it is for cows, with much smaller areas nibbled by horses, and sheep/goats/other.

About a quarter of pastureland is federally administered, mainly in the western states.

Adding up pasture and cropland used to produce feed (124.7 million acres), cattle dominate 41% of all land in the contiguous U.S.

These are forested areas outside of parks and reserves. About a quarter of the contiguous states are covered in these unprotected wooded areas.

About 11 million acres of timber are harvested every year, but thanks to regrowth, U.S. timber stock grew by about 1% per annum from 2007 to 2012.

The largest private owner of timberlands in the U.S. is a company called Weyerhaeuser. It owns 12.4 million acres or 2.3% of all available timber. Put differently: that's an area almost the size of West Virginia (or, on this map, a private fiefdom spanning the Arizona-New Mexico border).

Most of the land planted with food we eat is covered by wheat, followed by soybeans, peanuts and oilseeds.

More land is dedicated to sugarcane and sugarbeets and maple syrup than to vegetables.

More than a third of the entire corn crop, or around 38 million acres, is dedicated to ethanol, for bio-diesel.

Most of this is nature reserves, either state or national parks (15 and 29 million acres, respectively), but most of all federal wilderness areas (64 million acres).

Military areas cover around 25 million acres. That's about the size of Ohio.

Airports and railroads cover 3 million acres each, equal to the area of Connecticut (each) or Vermont (together).

Swamps, marshes, deserts, non-harvestable forests and generally any barren land of low economic value. Most of this category (about 50 million acres) is made up of rural residential lands.

About four in five Americans live in urban areas, which is about the size of the Northeast. Sounds like a good balance with nature. But urban areas have quadrupled in size since 1945, and are adding about a million acres—that's four of the squares on this map—each year.

For reference, the map indicates the approximate outlines of state borders and, in thinner white lines, a grid of squares with an area of 250,000 acres each.

For instance, that's the area covered by Christmas trees (conveniently corralled into one location on the coast of Georgia for this map).

One of the fastest-growing categories: land owned by the 100 largest private landowners. Was 28 million acres in 2008, is about 40 million acres now—slightly larger than the entire state of Florida.

Many thanks to all who sent in this map, found here on Bloomberg.

(1) Actual name: Golconda. Painted in 1953. Now at the Menil Collection in Houston, Texas. No motion is implied, so it's deliberately unclear whether they're rising, falling or hanging still in mid-air.

Physicist discovers the explosions that will end our universe

Philosophers have been asking the question for hundreds of years. Now neuroscientists are joining the quest to find out.