The Fountain of Hispanicity (Gets Two Things Wrong)

Celebrating Hispanic culture, the map-shaped fountain is one of Zaragoza's more curious attractions 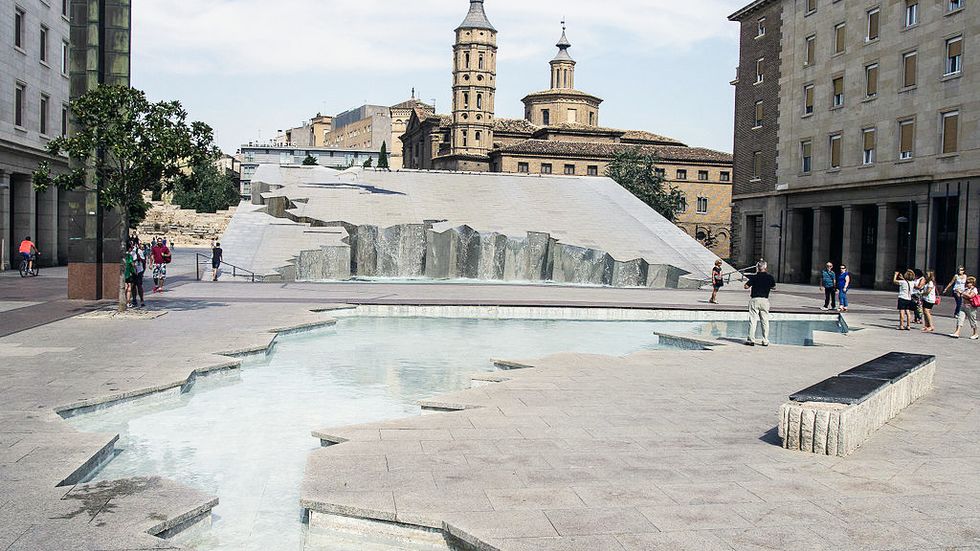 If you're visiting northeastern Spain this summer and like odd cartographic attractions, get thee to Zaragoza to check out the Fuente de la Hispanidad. Constructed on the city's central Plaza del Pilar in 1991, this 'Fountain of Hispanicity' celebrates the cultural links between Spain and Latin America not just in name, but by its very shape.

The fountain consists of a raised stone slab, into which are carved the coastlines of Cuba, Central America and the northern parts of South America. Water gushes over this slab into an adjacent pool, shaped like the rest of South America all the way down to Tierra del Fuego.

Strictly speaking, the fountain-shaped map is wrong on two counts: it is both incomplete and overinclusive. Hispanidad in its conventional definition covers 23 nations with Spanish heritage and culture. Most of them are indeed within the confines of the map/fountain, but some aren't – Spain itself isn't there, and neither are the Philippines and Equatorial Guinea, nor even those significant portions of the U.S. with Hispanic heritage. And on the other count, the map includes Brazil, which is part of a different, Portugal-based global club a.k.a. the Lusosphere (see also #545).

Geo-cultural inaccuracies aside, the location of the fountain itself is particularly apposite. It is located near the Basilica of Our Lady of the Pillar. The mother of Jesus is venerated here as the Virgen del Pilar ('Virgin of the Pillar') and Mother of the Hispanic Peoples.

Legend has it that the church is built upon the spot of Mary's first apparition, to the apostle St James the Great, on 2 January of the year 40. James supposedly was the first Christian missionary in Spain, but was making little headway among the heathens. Discouraged, he turned in prayer to Mary.

When she appeared to him – her only apparition before the Assumption – she presented him with a wooden statue of herself on a column of jasper, saying that one day the faith of the locals would be as firm as that pillar, and instructed him to build a church in her honour.

James was later executed in Jerusalem, and still according to church lore, his body brought back to Spain for burial at a place in Galicia around which arose Santiago de Compostela, still a popular pilgrimage destination. The chapel he built on the south bank of the Ebro, now in the centre of Zaragoza, has been rebuilt many times, but it still contains a wooden statue of Mary, resting on a column of jasper.

The Feast of Our Lady of the Pillar is held every year on 12 October. That is also the date on which Columbus discovered America. Known in the U.S. as Columbus Day, in Spain it is celebrated as both the National Day and the Dia de la Hispanidad – the start of the spread of Spanish culture throughout the Americas.

In 1730, Pope Clement XII sanctioned the celebration of the Virgén del Pilar throughout the Spanish Empire. In 1984, his successor John Paul II he came to Zaragoza to prostrate himself in front of the holy image of Mary, and honour La Señora del Pilar as Mother of the Hispanic Peoples.

Spain a bit far from your holiday destination this year? Here are some other map-based attractions across the world: Ciudad Evita in Argentina (#346), a model solar system along Route 1 in Maine (#428), a Nebraska-shaped field in Nebraska (#426), The World, off Dubai (#686), and a Danish map of the world (#727).

First image of the fountain by Francis Raher (found here on Wikimedia Commons), second image from Google Maps, third one from Google Earth.