Why the Prime Meridian belongs in the Dustbin of Geography

That picture of you at the Royal Observatory astride the Greenwich Meridian? It's a lie. 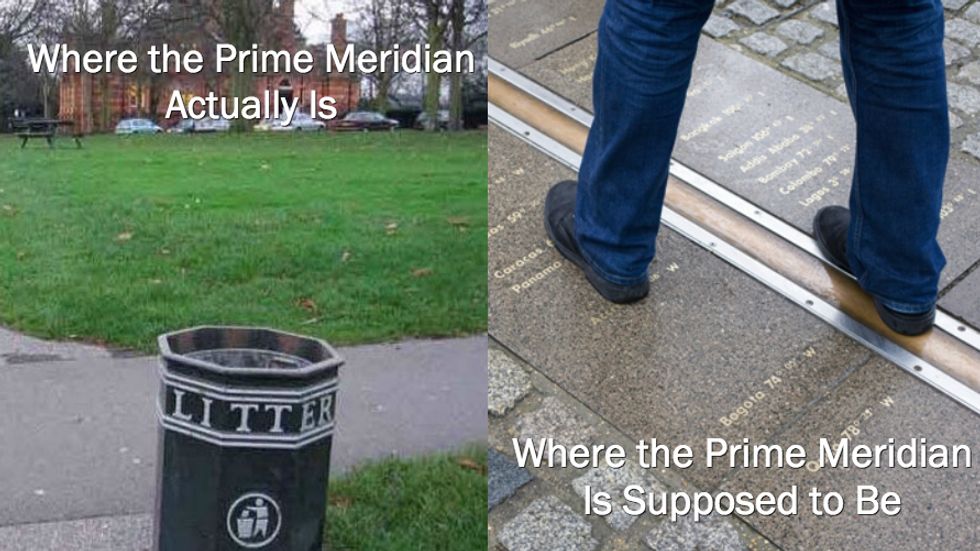 That picture of you standing astride the stainless steel Meridian Line in Greenwich? It's a lie: You don't really have one foot in either hemisphere. The real Prime Meridian runs 334 feet (102 m) east, cutting an imaginary north-south line through Greenwich Park. It is marked unceremoniously by a dustbin.

Visiting that dustbin is free (for now), but you paid 10 pounds for the privilege of standing on the exact dividing line between East and West. An article in the Journal of Geodesy describes the science behind the discrepancy. But the error has been knowable since the update to the World Geodetic System (used for GPS technology) in 1984, and actively known about since at least 1998, when the question was raised in the House of Lords.

"Whether the (National Maritime Museum, of which the Royal Observatory Greenwich is part) is liable for prosecution under the Trade Descriptions Act 1968 for selling tickets to the general public purporting to record Greenwich Mean Time on the Prime Meridian, when the time printed is Co-ordinated Universal Time (UTC) on a meridian line 102.5 metres (336 ft) west of the point recognised by the IERS (International Earth Rotation and Reference Systems Service) as from 1 January as the official Prime Meridian for the Millennium."

The Royal Observatory makes no effort to disabuse its visitors of the notion that they are visiting the exact location of the Prime Meridian. Stand astride two hemispheres at the home of Time, says its website — next to the Buy tickets button. But if visitors whip out their GPS-enabled smartphones to verify that they're at Zero Longitude, their screens will read 0°0'5.3”W instead. Staff knows what is going on; Dr. Marek Kukula, public astronomer at the Royal Observatory, has even admitted that “a marker in the park would be brilliant to update the story of the Greenwich Meridian into the 21st century.”

The old meridian, passing through the Observatory (dotted line) and the new one, 334 feet to the east in Greenwich Park. (Image: Journal of Geodesy)

Should the Royal Observatory be prosecuted for false advertising? Refunding that tenner we paid to get in would be a good start. Don't hold your breath on either account. But next time we're in Greenwich, you'll find us 334 feet east of the Royal Observatory, visiting the Dustbin of Geography. How did this happen?

Let's start with a word on latitude and longitude. Latitude defines the north-south position of any point on Earth. Lines of constant latitude are called parallels. The one at the Equator is at 0° latitude. On either pole, latitude is not a line but a single point: 90° latitude North or South. Longitude defines the east-west position of a point. Lines of constant longitude are called meridians. Both latitude and longitude are needed to define any point's exact location on Earth; but unlike latitude, which has the Equator and the poles as its obvious extremities, longitude has no "natural" base line.

At the meridian, but not at zero longitude. (Image: Coventry and Warwickshire Astronomical Society)

This is why many countries devised their own meridians. There used to be separate ones for Warsaw, Florence, Antwerp, Tenerife, and many other places. Until 1884, when an International Meridian Conference was called in Washington, D.C., to establish a Prime Meridian "to be employed as a common zero of longitude and standard of time-reckoning throughout the globe."

Greenwich was an obvious candidate, as Britain's maritime empire then still ruled the waves, ensuring that 72 percent of the world's sea commerce already used charts based on Greenwich. Also, the United States had already based its time zone system on Greenwich. Greenwich won by a large margin: 22 votes in favor, 1 against — the French abstained, no doubt miffed that the Paris Meridian didn't make it.

At zero longitude: the world's soon to be most famous dustbin. (Image: Coventry and Warwickshire Astronomical Society)

The conference settled on the so-called Airy Meridian, calculated in 1851 by Sir George Biddell Airy, the seventh Astronomer Royal. That north-south line runs through the Airy Transit Circle, the telescope at the heart of Greenwich Observatory tracking the movement of "clock stars." These are so called because they never rise or set and transit the meridian twice each day, allowing observers to set time and longitude on their appearance in the telescope crosshairs.

Of all those various meridians, it was Airy's that became the benchmark for global systems of time and place measurement. It divides the world in eastern and western hemispheres, and defines Greenwich Mean Time (now superseded by UTC) as the basis for global timekeeping. This is where the Third Millennium officially started. Tourists throng to the Meridian Line marker at the Royal Observatory in such numbers that the stainless steel attraction is showing signs of wear and tear. For this is as close to the crossroads of time and space as anyone is ever likely to get.

In all its glory. (Image: Coventry and Warwickshire Astronomical Society)

Where Airy went wrong was using a basin filled with mercury to ensure his telescope was aligned in absolute perpendicularity between the clock stars and the Earth. It would have worked, if the Earth were uniformly round. But it isn't, and the resulting gravitational anomaly affected Airy's measurements.

The error wasn't spotted until satellites using GPS technology were able to make measurements independent of local variations in gravity. The updated system is known as WGS 84 (World Geodetic System 1984) and ITRF (International Terrestrial Reference Frame). Scientists maintain the anomaly is limited to Greenwich, and doesn't affect the complex fabric of space and time built up around it. "Despite the lateral offset of the original and current zero longitude lines at Greenwich, the orientation of the meridian plane used to measure Universal Time has remained essentially unchanged,” the article in the Journal of Geodesy states.

That sounds a little too convenient. Imagine the alternative: a world of property, local, state and international borders assigned to the Dustbin of Geography, 334 feet to the east.

Read the entire article in the Journal of Geodesy. More on the subject here at the Coventry and Warwickshire Astronomical Society.