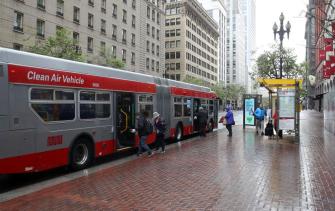 A bus stop in central San Francisco with proper signage, seating, and shelter. About 10 percent of bus stops in the city are so underdeveloped that they are, for all practical purposes, invisible. Credit: Justin Sullivan/Getty Images

The San Francisco County Municipal Transportation Authority (SFMTA) has nearly 3,000 bus stops in its network. Over three months in mid-2020, Marcel Moran visited every last one of them.

Not just a weird hobby

It would have been one of the weirder ways to kill time during the first months of the pandemic, but Mr. Moran’s reasons were more noteworthy than that. His was the first comprehensive survey of San Francisco’s bus stop amenities — more precisely, the level of comfort and security that they provide.

Previous studies show that the presence of seats, shelter, and even nearby trees make waiting for the bus seem shorter. Also, electronic screens showing estimated times of arrival (ETAs) reduce the frustration of waiting.

This suggests that a well-furnished bus stop will reassure riders and can even attract more. On the other hand, a shoddy, neglected bus stop will do the opposite. Accordingly, a number of transit agencies aim to improve the quality of their bus stops. However, what’s missing from their approach is a comprehensive study of bus-stop amenities to underpin such a strategy.

Or it was, until now. Mr Moran, a Ph.D. candidate in city planning at Berkeley, has produced a “census” of bus stop amenities throughout San Francisco — the first standardized overview of its kind. For each of the stops, he wanted to know: Is it properly indicated? Does it offer seating and/or shelter? Is there an electronic message board with real-time traffic info — and does it work properly? And is the access from curb to bus unobstructed by parked cars?

No seating, no shelter, no signage — no riders? 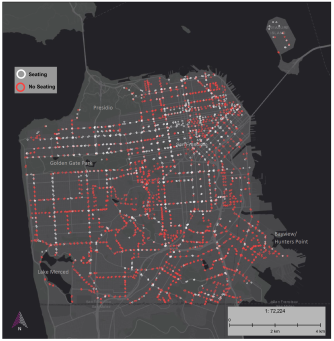 In a number of ways, San Francisco is an ideal place to test the quality of public transport amenities. The city is something of a laboratory for mobility innovation — see experiments with dynamic parking prices, shared bicycle and e-scooter programs, and a ban on private cars along Market Street.

Already in 1973, San Francisco declared itself a “transit first” city, meaning that city policies would favor public transport over private cars. The policy remains in place today, although this will come as a surprise to many who use the city’s public bus network.

Because Mr Moran’s survey found that:

The study’s findings, which appear in an article in the upcoming issue of the Journal of Public Transportation, not only point to large shortcomings in San Francisco’s bus stop amenities but also reveal a glaring geographical gap. While “a majority of (San Francisco) bus stops lack both seating and shelter of any kind,” Mr. Moran remarks that “amenity ‘coldspots’ nearly all lie within the city’s southern half.” 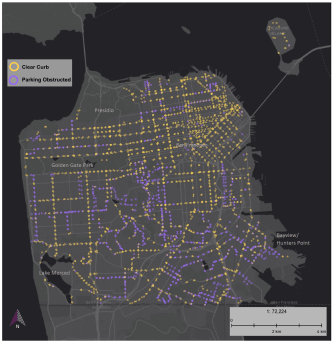 Barrier-free access from curb to bus is almost a given in the north; you are much more likely to have to navigate a row of parked cars in the south.Credit: Marcel Moran / Journal of Public Transportation – CC BY-NC 4.0

The comfort level of bus stops is generally much higher in the northern half of the city, the location of its central and commercial districts. It is much lower in the south, which is more residential and peripheral.

It will surprise few that there are socioeconomic and racial components to the imbalance, with the north of the city generally being wealthier and whiter than the south, which is poorer and with more people of color.

Public transport, including by bus, is key to reducing the congestion and pollution caused by urban traffic. Yet bus ridership in the U.S. has been on a slow and steady decline for years — and a precipitous one since the start of the pandemic.

Reversing the trend via the “social minimum” 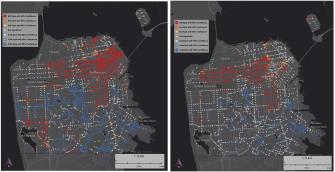 These maps show hotspots (in red) and coldspots (in blue) of the availability of seating (left) and obstruction-free access (right) at bus stops in San Francisco.Credit: Marcel Moran / Journal of Public Transportation – CC BY-NC 4.0

Reversing that trend will require raising the quality of public transport, but in most such considerations, the amenities provided by bus stops play little or no part. Mr Moran’s study could help change that. “When parking is abundant and free, and bus stops in many neighborhoods are genuinely hard to spot and uncomfortable to wait at, we sift out many would-be riders,” he told CityLab.

In his article, he advocates the social minimum principle, which would require a minimum level of amenities at all bus stops within the network. Approached by CityLab, the SFMTA said it was aware of “imbalances” in bus stop quality but planned to provide uniform signage for all, making them more visible and user friendly. No word, however, on seating, shelter and barrier-free access.

For more on Marcel Moran’s study, see his article: Are Shelters in Place?: Mapping the Distribution of Transit Amenities via a Bus-Stop Census of San Francisco, cited here by the Berkeley Institute of Transportation Studies, and soon in the Journal of Public Transportation (Vol. 23, No. 3 – July 2021).

Also, check out Bloomberg CityLab for interesting stuff on urban design issues — plus some cool cartography content in the sub-series MapLab.

For centuries, the only way to travel between the Old and New World was through ships like the RMS Lusitania. Experiences varied wildly depending on your income.
Strange Maps

In Louisiana, high school starts at 7:30 am. Research shows that is at least an hour too early.
Up Next
The Present