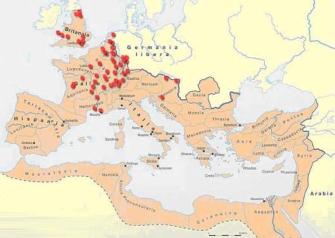 Some outliers notwithstanding, almost all Roman dodecahedrons were found in Britain, Gaul, and Roman Germany.Credit: Imperium Romana

In the first episode of Buck Rogers, the 1980s television series about an astronaut from the present marooned in the 25th century, our hero visits a museum of the future. A staff member brandishes a mid-20th-century hair dryer. “Early hand laser,” he opines.

As an observation of how common knowledge gets lost over time, it’s both funny and poignant. Because our museums also stock items from the past that completely baffle the experts.

One of the strongest clues: the map

Few are as intriguing as the hundred or so Roman dodecahedrons that we have found. We know next to nothing about these mysterious objects — so little, in fact, that the various theories about their meaning and function are themselves a source of entertainment.

One of the strongest clues we have is this map, which tells us that they were particularly popular in one corner of the Roman Empire: northern Gaul and Roman Germany.

So, what do we know?

Most of the objects are made from bronze, but some are in stone and don’t have holes or knobs. The dodecahedrons are often fist-sized yet can vary in height from 4 to 11 cm (about 1.5 to 4.5 in). The size of the holes also varies, from 6 to 40 mm (0.2 to 1.5 in). Two opposing holes typically are of differing sizes.

Objects of this type were unknown until the first one was found in 1739 in Aston, Hertfordshire. In all, 116 have been dug up from sites as far apart as northern England and Hungary. But most have been found in Gaul, particularly in the Rhine basin, in what is now Switzerland, eastern France, southern Germany, and the Low Countries. Some were found in coin hoards, indicating their owners considered them valuable. Most can be dated to the 2nd and 3rd century AD. 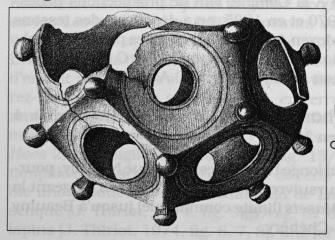 No mention of the dodecahedrons from Roman times has survived. Any theory as to their function is based solely on speculation. Some suggestions: 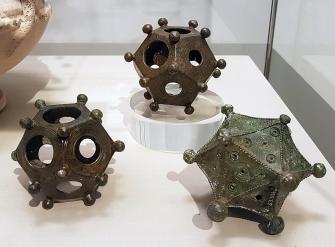 Two Roman dodecahedrons (left, center) and the only known example of an icosahedron (with 20 sides, right), all on display in the Rheinisches Landesmuseum in Bonn, Germany. Credit: Kleon3, CC BY-SA 4.0

The geographic spread of the dodecahedrons we know of is particular: they were all found in territories administered by Rome, inhabited by Celts. That enhances the theory that they were specific to Gallo-Roman culture, which emerged from the contact between the Celtic peoples of Gaul and their Roman conquerors.

Intriguingly, archaeologists in the 1960s have found similar objects along the Maritime Silk Road in Southeast Asia, except smaller and made of gold. They do not appear to predate the Gallo-Roman artefacts and may be evidence of Roman influence on the ancient Indochinese kingdom of Funan.

For now, and perhaps forever, the mystery of the Roman dodecahedrons remains unsolved.

With almost every shovel of sand shifted in Egypt, another artifact comes to light.
The Past

Archaeologists discovered what they thought was an ancient synagogue. They were wrong.

Instead of worshipping Yahweh, the devotees were perhaps dedicated to Mars and Jupiter.
The Past

We got lucky with our evolutionary history.
The Past

There were many other species of human on the planet. Svante Pääbo discovered one of them.
Up Next
Starts With A Bang

The Unfiltered Truth Behind Human Magnetism, Vaccines, And COVID-19

Metal really does sometimes stick to some people’s skin. Here’s the science of why.Every once in a while, a claim comes along that wildly challenges the mainstream scientific narrative. These challenges […]