Totalus Rankium is “a fun, informative podcast (ranking) the Roman Emperors based on: fighting ability; madness; their successes; what they looked like and how long they lasted”. For that last metric, the podcast also produced this map, showing the locations where Roman emperors expired.

To be the Emperor of Rome was to be leader of the biggest and most powerful empire the world had ever seen. Yet even in a world where life already tended to be nasty, brutish and short, it was one of the more dangerous jobs: only about a quarter of all Roman Emperors died natural deaths.

According to this graph, of the 70 Emperors to rule Rome between 14 and 395 AD, more died of assassination (23) than of natural causes (20), and that’s not even including those who were possibly assassinated (8), executed (3) or forced to commit suicide (5). A further 9 met a violent death on the battlefield. 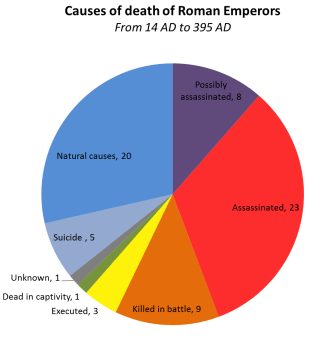 Most of the emperors died in or near Rome; this short selection of those who expired elsewhere shows that if American politics is House of Cards, Roman politics was Game of Thrones.

Septimius Severus Constantius, 21st Emperor (reigned 193-211), is the only one to have died in Britain. He is also the most prominent of the handful of Emperors with African roots. Severus was born in 145 in Libya from an Italian mother and a father with Berber and Punic ancestry. He seized power in the so-called Year of the Five Emperors – luckily for him, he was the fifth. Severus defeated his rivals, consolidated his power, annexed the Kingdom of Osroene and sacked the Parthian capital of Ctesiphon, pushing the Roman frontier to the Tigris river. He also consolidated Rome’s frontiers in Arabia and North Africa. In Britain, he reinforced Hadrian’s Wall, re-occupied the Antonine Wall to the north of it and invaded Scotland. However, that conquest was cut short by the illness that was to fell him in Eburacum (now York) on February 4th, 211. His dying words to his sons Caracalla and Geta, who would succeed him, were: “Be harmonious, enrich the soldiers, and scorn all other men”. At his death, the Roman Empire had the greatest extent it would ever have, encompassing an area of 2 million square miles (5.18 million sq. km) – two thirds of the continental U.S. (1). 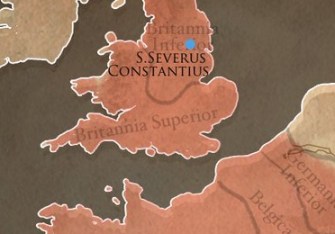 Severus Alexander, 26th Emperor (r. 222 – 235) is the only Roman Emperor to have met his death in Germany. He was the last emperor of the Severan dynasty, founded by Severus (the one who died in York). Alexander gained control of the empire at the tender age of 13, following the assassination of his cousin Elagabalus. Alexander was an able and tolerant administrator, and Rome prospered under his reign – although the fact that he relied heavily on the advice of his mother and grandmother was much resented. The rising Sassanid empire in Persia inflicted a number of defeats on Rome’s armies in the east. When he tried to appease the Germanic tribes in the north with bribes rather than meet them in battle, this alienated many in the Roman army and ultimately led to his assassination. Alexander and his mother were assassinated on March 19, 235 by mutineering soldiers of the 22nd legion at Moguntiacum (now Mainz). His assassination kicked off the Crisis of the Third Century – fifty years of wars, invasions and economic collapse. 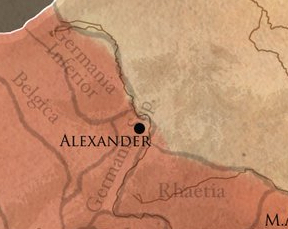 France – or as it then was called: Gaul – proved to be the death of no less than four emperors.

Serbian-born Gratian, 67th Emperor (r. 367-383), first was junior co-emperor with his father (Valentinian I), then senior co-emperor with his brother (Valentinian II). He was the last emperor to lead a military campaign against Germanic tribes across the Rhine. Gratian favoured Christianity, refused to accept the divine attributes of imperial rule and had all pagan temples and shrines confiscated by the government. When a Roman general in Britain revolted and invaded Gaul, Gratian fled from Paris to Lyon, where he was betrayed and assassinated on August 25th, 383. Ironically for a promoter of Christianity – and like most emperors before him – Gratian was still deified after his death, in keeping with Rome’s pagan state cult.

Flavius Valentinianus, 68th Emperor (r. 375-392) was four years old when he was acclaimed Augustus by his father’s generals, succeeding his father Valentinianus I as the co-emperor to his half-brother Gratian. As Valentinianus II, he first held court in Milan and ruled over a central part of the empire (including Italy and North Africa). In 388, after the defeat of the usurper whose invasion of Gaul had led to the death of Gratian, he was installed in Vienne under the guardianship of Arbogast, a Frankish general and ally of Theodosius, emperor of the eastern half of the empire. Relations between the two were not amicable, to say the least. Arbogast killed a friend of the emperor before his very eyes, forbade Valentinian II of leading an army into Italy to counter a barbarian invasion, and tore up the resignation letter Valentinian had presented him with. Valentinian was found hanged in his residence on May 15th, 392. He was only 21. Arbogast claimed it was suicide. Most believe it was Arbogast. 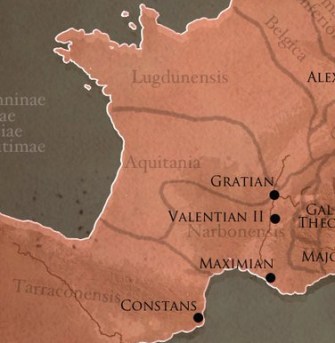 Maximian, 52nd Emperor (r. 285-310). The son of a Panonnian shopkeeper, he served in the army with Diocletian. After Diocletian’s accession to the top job, he appointed Maximian as his co-ruler, or Caesar, because of his military prowess. Maximian subjugated the Frankish king Gennobaudes, thus re-establishing Roman dominance in the Rhineland but failed to dislodge Carausius – a rebellious general who had founded a secessionist ‘British Empire’ (Imperium Brittaniarum). He led a military campaign in North Africa against Frankish pirates and Berber raiders. Maximian and Diocletian jointly retired from imperial office, but Maximian got re-involved in imperial politics, ultimately with fatal consequences. Following his failed rebellion against the emperor Constantine, he was captured in Massilia (Marseilles) and strongly advised to commit suicide – he hung himself in July 310. Constantine issued a damnatio memoriae, erasing all public inscriptions and destroying all public works bearing the name of Maximian. He was reconsecrated as a god from 317. Via his two daughters, he was grandfather or great-grandfather to every reigning emperor from 337 to 363.

Constans, 62nd Emperor (r. 337-350). The son of Constantine I, Constans co-ruled first with his brother Constantine II and then with his other brother Constantius II, who would eventually succeed him. His homosexuality (including “scandalous behaviour with handsome barbarian hostages”) and favouritism of his personal bodyguard lost him the support of the army. While on the run to Spain from a rebelling general, he was assassinated in February 350 in Vicus Helena (now Elne in France), thus (sort of) fulfilling a prophecy that he would die in the arms of his grandmother – Helena, the mother of Constantine.

Gordian I and II, joint 28th Emperors (r. 238). This father-and-son team clung to power for just 21 days in 238, also known as the Year of the Six Emperors. They reluctantly assumed the leadership of a tax revolt against Maximinus Thrax, who had gained the imperial purple by killing Alexander Severus in Mainz. Although the Senate and a number of provinces sided with them, they were ultimately defeated in their power base of Carthage following the invasion of a Roman legion from the neighbouring province of Numidia. Gordian junior was killed in action, Gordian senior hanged himself with his belt. Both were deified by the Senate. 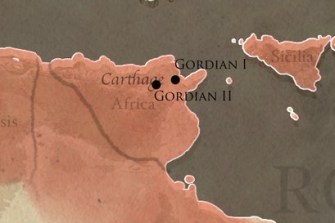 Asia, or as we now would call it: the Middle East, saw several emperors meet a tragic end:

Gordian III, 32nd Emperor (r. 238-244), was the grandson of Gordian I and the nephew of Gordian II. It was basically in their memory that he was proclaimed emperor. He was only 13 years old at his proclamation, younger than any other sole emperor of the unified Empire. When the Sassanid Persians invaded Roman Mesopotamia, Gordian III became the last emperor in history to open the gates of the Temple of Janus (a symbol for Rome being at war; closed doors meant peace). Sassanid sources say Gordian III fell in battle near present-day Fallujah in Iraq, sealing a major Roman defeat. Roman sources do not mention this battle, and say the emperor died in northern Mesopotamia.

No Roman ruler died as ignominiously as Valerian, 40th Emperor (r. 253-260). After his defeat at Edessa in 260, he set up a peace negotiation with his Persian counterpart Shapur. But his opponent seized him and held him captive for the rest of his life, which was spent in humiliating slavery. Shapur reportedly used Valerian as a human footstool when mounting his horse. When Valerian offered to gather a ransom for his release, Shapur had Valerian killed by forcing him to swallow molten gold. The emperor’s skin was stuffed with straw and kept as a trophy in the main Persian temple. Some historians, however, suspect the horrific tale is a deliberate exaggeration by a Christian scholar to demonstrate that persecutors of Christians (like Valerian) were destined for gruesome deaths. 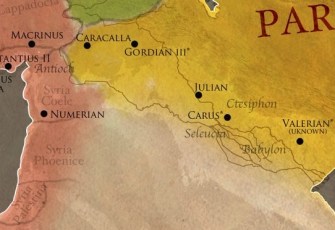 Carus, 48th Emperor (r. 282-283) successfully fought Germanic and Sarmatian tribes in the west, annexed Mesopotamia and sacked the Sassanid capital of Ctesiphon in the east. For his victories, he received the titles Germanicus Maximus and Persicus Maximus. His death, near the Tigris, has variously been attributed to natural causes, assassination, a combat wound and lightning.

Numerian, 50th emperor (r. 283-284), son and successor of Carus, together with his older brother Carinus. While Carinus was in charge of the west, Numerian led a Roman retreat from Persia. For much of that voyage, Numerian travelled in a closed coach, supposedly because of an inflammation of the eyes. By the time the coach reached Bithynia, a terrible smell emanated from it. Upon opening the curtains, Numerian’s soldiers found him dead. As his successor, the soldiers chose Diocletian, who swore he had nothing to do with Numerian’s death and pinned the blame on the late emperor’s aide Aper, whom he then personally and publicly killed.

Julian, 63rd Emperor (r. 355-363), also known as Julian the Apostate. Although both his parents were Christians, he was the last non-Christian emperor and tried to revive paganism. He reopened pagan temples, removed Christian privileges and fostered division between various Christian sects. In an attempt to promote any religion other than Christianity, he even proposed to rebuild the Jewish Temple in Jerusalem. Early in his career, Julian defeated a Germanic army three times larger than his own at Argentoratum (Strasbourg). But he was mortally wounded in combat against the Sassanid Persians, dying in Maranga, Mesopotamia. His last words are reported as: “You have won, Galilean”, an acknowledgement of his failure to defeat Christianity. Several of Julian’s literary works survive, including Misopogon (‘Beard-Hater’), a satirical essay on the dislike of the citizens of Antioch of the emperor’s own ‘philosopher’s beard’, in a time when the fashion was for clean-shaven faces. 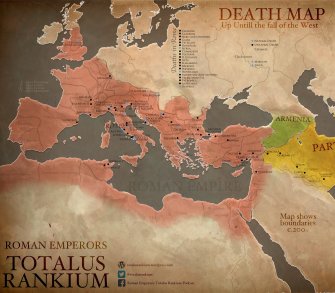 For more on the Roman Empire, its leaders and their deaths, check out the Totalus Rankium Twitter feed and podcast. Causes of death graph found here on Reddit.

Commodus lived the anti-Stoic life, pursuing lust, narcissism, and self-indulgence.
Up Next
Sponsored

Optimism may be quantifiably keeping marriages together, especially after the so-called honeymoon period ends.