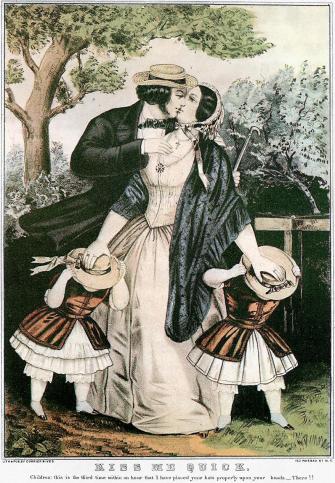 “Kiss me quick”: a humorous take on the social minefield that had to be navigated in early 19th century courtships. Credit: Currier & Ives, New York City (ca. 1840) / Public domain

Times and attitudes change, but love is love. We recognize its joys and perils even as it manifests itself in other ages and under different constraints. That may explain the enduring popularity of this decidedly antique allegory of love. It is entitled A Map of the Open Country of Woman’s Heart.

The map continues the centuries-old conceit that the various aspects of love (and marriage) can be represented as an actual landscape and that a map can serve as a guide into their interrelatedness — a road map of love, so to speak. The map’s title indeed goes on to specify that it “exhibit[s the heart’s] internal communications and the facilities and dangers to Travellers therein.”

Other famous amorous topographies include George Skaife Beeching’s Map of Matrimony (ca. 1880) and the Carte de Tendre (1654), a double-entendre invented for Madame de Scudéry’s historical novel Clélie (see Strange Maps #245). But what sets this map apart, and what may explain its continuing appeal, is that it presents the landscape of love not as random continents but in the very shape of a heart — not the actual organ but the stylized one we still associate with tender feelings (and playing cards).

By its recognizable form, sentimental topic, and visible antiquity, Woman’s Heart has become a staple of graphic design to this day. However, a closer examination reveals its contents to be more era-specific than its sympathetic shape suggests. 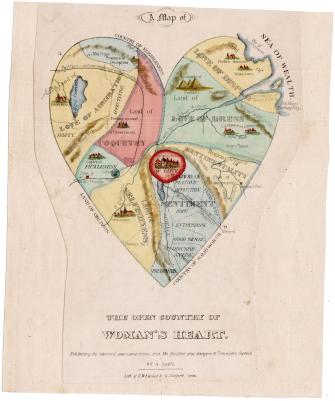 It is a truth universally acknowledged that an eligible young woman looking for true love must be in want of a map.Credit: Boston Rare Maps / Public domain

The map is anonymous (“by a lady”) and undated, but thanks to a reference to its lithographer (D.W. Kellogg & Co. in Hartford, Connecticut), it can reliably be dated to 1833-1842. In other words, the map shows how women were supposed to feel about relationships, love, and marriage in mid-19th century New England. In short, love is an “open country” with many choices — all bad, dangerous, and detrimental except for one. Starting from top right:

Dear heavens, there are so many ways the voyage out of the City and District of Love, at the center of the heart, can go wrong. Love’s saving grace is that it naturally borders and easily connects to Sentiment, the one and only pathway toward Esteem.

Clearly, love in 1830s Connecticut had to fit into a strict corset of social mores, ultimately dictated by religious piety. While this map showed that the true course was clear, it also demonstrated that the potential pitfalls were several — but many are no longer recognized as such in today’s consumerist society. (Few people still seem to worry about the corrupting nature of satin.)

So, Woman’s Heart is more out of step with today’s relationship goals than a superficial glance suggests. But there is more. The map is only one half of a long-forgotten pair, which together paint a decidedly pessimistic picture of love.

A map for the lesser half 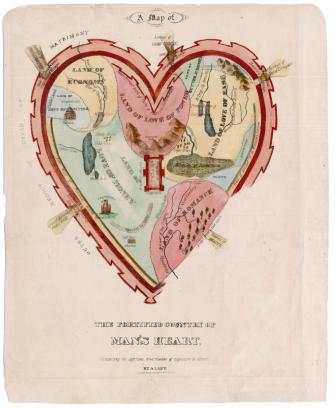 A man’s heart is his fortress. Pity the woman wanting to conquer the citadel.Credit: Boston Rare Maps / Public domain

Boston Rare Maps recently sold only the second known pair of those maps. The other map shows the Fortified Country of Man’s Heart. This is a decidedly less “open” place than Woman’s Heart: the map shows its defences, and modes of exposure to attack.

Again, various regions are presented, only one of which leads to matrimonial bliss. Starting from top right:

At the center of it all is the virtually impenetrable Citadel of Selflove. But for the breach along the Land of Romance, Man’s Heart is entirely surrounded by fortifications with only a handful of avenues communicating with a woman’s Good Sense, Housewifery, Fortune, and Good Temper.

Faced first with the difficulty of mastering her own heart, the eligible young woman of mid-19th century New England was then tasked with conquering that of an eligible young man. As this map shows, that heart was a citadel, designed to deflect virtually all amorous intentions. And no matter how well she prepared, the only surefire avenue into the undefended portion of his heart was one beyond anyone’s control: beauty.

How disheartening (no pun intended). Perhaps it is not surprising that the second of this pair of hearts has mostly gotten lost over time.

Tags
lovemapsmarriagerelationships
In this article
lovemapsmarriagerelationships
Related
Health
Why are people sexually attracted to cartoons? Evolution.
Nikolaas Tinbergen’s concept of “supernormal stimulus” explains why humans are attracted to a heightened version of reality.
Neuropsych
The life-long psychological effects your first love has on you
If love is an addiction, your first love is the first dose.
Strange Maps
Did dark magic conjure up the British Empire?
Esoteric evidence points to a ritual performed by Queen Elizabeth’s court magician John Dee.
Strange Maps
Europe’s oldest map shows tiny Bronze Age kingdom
Discovered in 1900, the Saint-Bélec slab languished unrecognized in a castle basement for over a century.
Strange Maps
Peak foliage map: where and when are leaves changing color?
Starting just about now, leaves start changing color from north to south, high to low, light to dark.
Up Next
Starts With A Bang
Can The Universe Turn Stars Back Into Planets?
We’ve already observed three cases where it’s happened.When you look at an object in space, it’s pretty easy to tell if it’s a star or a planet. Stars are large […]