How do you map a half-discovered country? You make up the other half! 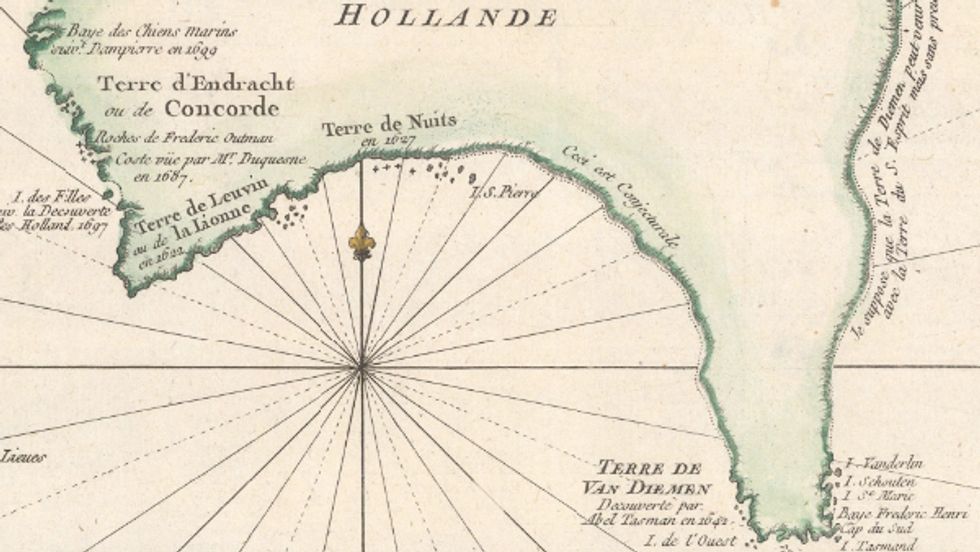 This is what happens when you put your Australia too close to the heater — it melts. No, I'm not buying you a new one!

On this map, Australia's western half is fairly recognisable, but the other half is almost literally dripping off the page. What did it do to deserve such treatment?

We're all familiar with what Australia should look like, or course — that strangely animalistic shape: half dog's head, half cat's head. But this map dates from the time when the island-continent was still only half-discovered. The dog's head half, to be precise.

By the mid-18th century, Dutch explorers had charted Australia's western coastline, naming the unexplored hinterland "New Holland." They named a smaller island, further to the east, "New Zealand," after another part of their distant homeland. In between, they landed on a piece of real estate they called Van Diemen's Land, known to us as Tasmania.

With much else in between and around still unknown, what was the point of making a map of the region? The point, in short, was about the itch to make a profit as least as much as about the urge to discover.

Europe's maritime empires — the world powers of the day — were engaged in a race for discovery of, dominion over, and ultimately profit from as-yet-unknown lands. The Spice Islands, to the north of New Holland, (and now known as the Moluccas) had been a source of fabulous wealth since the 16th century. Who knew what riches these strange new lands might hold?

So spare a thought for Jacques-Nicolas Bellin, the French cartographer who made this map in 1753, with innumerable merchant-adventurers looking over his shoulder. With very little to go on, he filled in the blanks on the map as well as he could. All things considered, he could have done a lot worse than this melted Australia.

Bellin had a few certainties from which to start. Some places were well-attested and located. A few survive to this day. For example, Terre de Leuvin, named after the Dutch ship Leeuwin. There's still a Cape Leeuwin in the area. Further east, Terre de Nuits does not refer to a "land of nights," but is named after Pieter Nuyts, who visited the area in 1627 on his way from the Netherlands to Formosa (now Taiwan). A local nature reserve is still called Nuytsland. In the north, Terre d'Arnhem, Australia's western hump, is still referred to as Arnhem Land today.

Even blanker was the land east of Terre de Nuits. Along the coast, Bellin has inserted the legend, Ceci est conjecturale: "This is conjectural." It almost sounds like a foreshadowing of René Magritte's famous slogan, under that painted pipe: Ceci n'est pas une pipe.

Appropriately featureless, the Conjectural Coast, dotted to indicate its hypotheticality, bends south to connect with Terre Van Diemen, discovered in 1642 by Abel Tasman, and decked out with a bit more detail.

We now know that Van Diemen's Land, aka Tasmania, is an island, but Bellin did not. He meekly added another caveat to New Holland's undiscovered eastern coast: Je suppose que la Terre de Diemen peut venir se joindre avec la Terre du S. Esprit, mais sans preuves: "I suppose Van Diemen's Land could be joined with the Land of the Holy Ghost (Cape York), but I don't have any proof."

Bellin even seems to have entertained the possibility that Cape York was connected to New Guinea, but the map hedges its bets: Both land masses are coloured differently, even though a dotted line seems to link them to each other.

New Zealand is another combination of full, detailed lines and dotted, smooth lines. The legend reads: "This coast was discovered by Abel Tasmand (sic) in 1642, and named by him New Zealand; it could be a part of a great antipodean continent, on the opposite side of the world to Europe."

At that time, people still assumed that the world's continents were somehow in balance, and that the European land mass required an opposite land mass in the corresponding place in the southern hemisphere (see also #104).

Stupid, right? But just imagine: Which half of what you know to be true will be proved wrong in 263 years' time?