Corruption – bending the rules of government in exchange for favours or bribes – is a worldwide problem. It is certainly not limited to Latin America. As this map shows, some Latin American countries are relatively corruption-free. That good news does not extend throughout the region; other countries have major issues with corruption. Most notably Mexico.

This map is included in the latest report by Transparency International on corruption in Latin America and the Caribbean, published on 9 October. Based on a survey of 22,000 people in 20 countries across the region, it shows the percentage of citizens of each country who say they paid a bribe in the previous 12 months in order to access basic services (including school and hospital staff, government officials, police officers and judges).

Tiny Trinidad and Tobago (6%) is the most corruption-free country of the region. It is followed, perhaps surprisingly, by Brazil (11%). That country has recently been rocked by high-level corruption scandals, which recently even saw former president Lula sentenced to prison (he remains free pending his appeal). Perhaps those scandals – or more precisely, the massive popular backlash against corruption – have had a positive effect.

The only other country scoring under 20% is Argentina (16%). Eight countries score between 20% and 30%, from Jamaica (21%) on the lower end over Chile and Uruguay, (both at 22%) via Paraguay (23%) and Costa Rica (24%) finally to Ecuador, Bolivia and Guatemala, three countries in which 28% of those surveyed say they have paid a bribe in the previous year to access basic services. 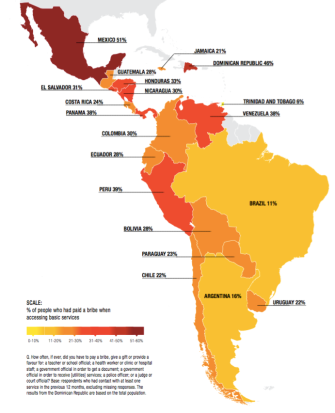 Only now have we reached the Latin America and Caribbean Corruption Top Three. In third place, with a whopping 39%: Peru. In second place, with no less than 46%: the Dominican Republic. But undisputedly in the lead: Mexico, with 51%. Meaning that more than half of Mexicans have had to bribe their way into obtaining basic services in the year prior to the survey.

Extrapolating for the entire region, Transparency International found that “more than 90 million people across the 20 countries surveyed had paid a bribe in the previous 12 months, or just under one in three people when they came into contact with public services”.

Bears, chimps, or humans? A track of five poorly preserved footsteps at Laetoli has puzzled paleontologists for decades. Now, a research paper from Nature claims to have solved the mystery.
Up Next
Mind & Brain