WALTER: He lives in North Hollywood on Radford, near the In-N-Out Burger–

THE DUDE: The In-N-Out Burger is on Camrose.

WALTER: Near the In-N-Out Burger–

DONNY: Those are good burgers, Walter. 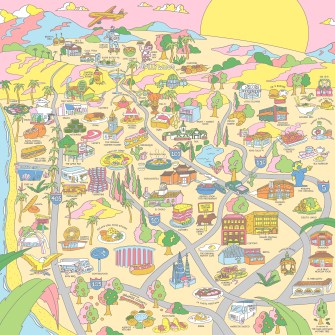 There are many ways to navigate a city. Take its architectural wonders as guideposts, its museums or houses of worship. Or its bars or bookshops. But the hungry visitor to Los Angeles could do worse than to pick the string of famous eateries festooning this map of the City of Angels.

Drive-by food is a perfect fit for LA’s car-based culture, and both – the fast cars and the fast food – conquered the city before they took over the world. So even if they’re relatively recent, a lot of places on this map deserve a mention in fast food history.

But ‘fast’ is just one item on LA’s menu. So are various Latin and Asian cuisines, sophisticated restaurants, farmer’s markets, and the moveable feast that is the food truck.

Anyone looking for a foodography of Los Angeles can stop right here, at this map produced by illustrator Clay Hickson. And take a bite.

“To celebrate the return of the LA Times Food Section (at the start of April, Ed.), I was asked to illustrate a map of some of the best/most beloved/iconic restaurants in Los Angeles,” Mr Hickson says. “I didn’t choose the restaurants myself, but I was able to slip a few suggestions in there.”

Here are some eye-catching (and appetite-whetting) examples: 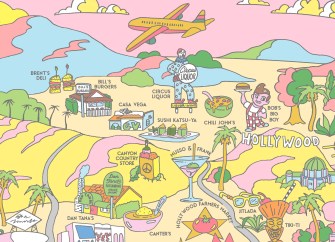 Bob’s Big Boy is another foodie landmark nearby.

Pastrami on rye and lobster Thermidor

Officially Brent’s Delicatessen & Restaurant, this Jewish deli opened in Northridge in 1967. It was taken over by Roy Peskin two years later (for the princely sum of $1,700) and has since opened a second location in Westlake Village. Brent’s is most famous for its Black Pastrami Reuben (pastrami, Russian dressing, sauerkraut, Swiss cheese on grilled rye bread).

This burger stand on Oxnard Street in Van Nuys produces, according to Forbes Magazine, “the kind of burger you marry.” The burgers may be legendary, but Bill Elwell, who has been flipping them since the mid-1960s, doesn’t do fries. Mr Elwell is in his early nineties now, so it may be wise to put this shack high up the to-do list – fries or no.

This Mexican restaurant in Sherman Oaks, still owned by the same family that opened it in 1956, is an LA institution – and not just for its food. Their Mexican Coffee, made with 1800 Tequila Reposado, Kahlua, whipped cream (and coffee), is as famous for its name as for its kick: ‘Keep the Change, Ya Filthy Animal’.

Opened in 1919 on Hollywood Boulevard, Musso & Frank advertises as the ‘oldest (bar and restaurant) in Hollywood’, but has a few other claims to fame. It is the Hollywood restaurant, making appearances in countless movies (“Oceans Eleven” and “Ed Wood”, to name but two). It was the beloved haunt of writers such as Fante, Faulkner and Fitzgerald; and movie royalty including Chaplin, Garbo and Bogart. Popular items on the classic menu include Welsh Rarebit, lobster Thermidor and chicken pot pie (the latter only on Thursdays). 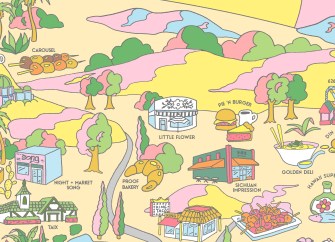 The most mouthwatering map ever of the San Gabriel Valley and environs.

Old-fashioned joint serving classic burgers, milkshakes and fruit pies in Pasadena since 1963 – and ‘home of America’s Top 5 cheeseburger as ranked by the Food Network’, the website proclaims.

This Vietnamese restaurant has been a San Gabriel institution since 1981. Whether you show up for the breakfast pho or a banh mi lunch, expect the food to be delicious and the helpings generous – but only after you’ve braved the inevitable queue.

To the original restaurant in the San Gabriel Valley, Sichuan Impression has added two more locations in LA, the latest one last year on Santa Monica Boulevard. The expansion reflects the growing popularity of the spicy fare typical of China’s Sichuan province.

Founded in 1927 by Marius Taix Jr., this family restaurant in Echo Park is known for its generous portions at modest prices. It is also the oldest French restaurant in Los Angeles. 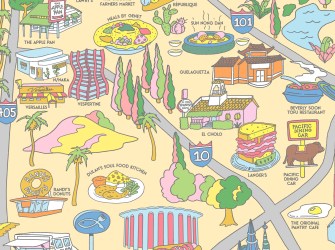 Randy’s isn’t just a 24-hour drive-in bakery, but also a landmark making frequent appearances in movies and on tv. A giant donut on your roof will do that – although in all fairness, a few other examples of donut gigantism survive throughout the city from its heyday up to the 1950s. But this one, located on the corner of La Cienega and W Manchester Blvd. in Inglewood since 1953, is the most famous one.

Soon tofu is a red, bubbling, almost pudding-like soft tofu stew, and few places do it better than this one on the corner of Vermont and Olympic in Koreatown.

In 1925, a customer waiting for his food at the Sonora Café doodles the figure of a man on the menu. When asked who it is, the man answers: El Cholo – the term for farm labourer given by the old Spanish rancheros in California. The name stuck, and so did the restaurant, which has been called ‘the mother of Mexican food in Los Angeles’.

Expect to fork out a few hundred dollars for your food at Vespertine – an avant-garde restaurant in an eye-catching tower of twisted orange steel – but in return you get an experience in culinary deconstructivism unrivalled in LA, lasting several hours and (typically) over a dozen courses. Critics – and customers – are divided, between those who laud the restaurant as refreshingly experimental, and others who find it all more than a bit pretentious. 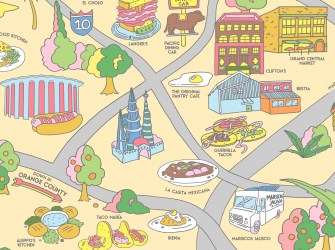 All you can eat? Probably a bit more than that…

From Aleppo to Anaheim

This Mediterranean/Middle Eastern restaurant in Anaheim serves Syrian, Turkish and Armenian fare, and is famous for its nine types of kibbeh and the secret spice blend for its kebabs. The name is not accidental: the Syrian city of Aleppo – alas, largely destroyed during the Syrian Civil War – was once known as the culinary capital of the Middle East.

Between jobs back in 2012, chef Wes Avila started selling tacos from a cart in Downtown LA’s Arts District. That blossomed into Guerrilla Tacos, first a food truck, since July 2018 a brick-and-mortar restaurant a few blocks from where Wes sold the first taco from his cart.

This place brings together a wide variety of food retailers under one roof, as it has done since 1917. You can sample Japanese and Chinese cuisine, but also gobble down a real Berliner currywurst. You can buy bread, cheese and other staples, or just get a burger or grab a pizza.

We are looking into the car through the broken windshield as it rattles down the freeway. Wind whistles through the caved-in windows. The Dude drives, his jaw clenched, staring grimly out at the road. Walter, beside him, and Donny in the back seat, munch on In-N-Out Burgers. Creedence music plays above the bluster of wind.

Neither Camrose Drive nor Radford Avenue, about 6 miles from each other in North Hollywood, has an In-N-Out Burger. The Big Lebowski was filmed in Los Angeles, but the city’s cinematic landscape doesn’t necessarily mirror its culinary one.

Map reproduced with kind permission of Mr. Hickson. Found here, at the relaunch of the LA Times‘s food section on 11 April.

We eat 50 billion chickens every year. Is there a better way?
Thinking

Participants were asked to complete a simple attention task as well as a more challenging “placekeeping” task.
Up Next
Creativity

Barbara Oakley: How too much focus can limit your creativity

Have you ever had the experience of giving up on a problem and coming back to it some time later to find its solution suddenly obvious? According to Barbara Oakley, […]