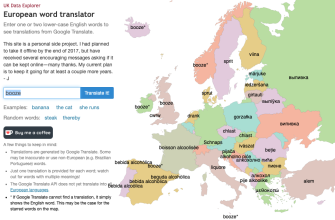 Translate English into all European languages, one word at a time.

The optimist expects the best, the pessimist fears the worst, the realist is prepared for all eventualities. So here’s what you do when that bus full of tourists from all over Europe breaks down just outside your door, not speaking a word of English between them.

You whip out James Trimble’s fantastic European Word Translator, which instantly translates English words (one or two at a time) into all major European languages – with the result conveniently placed on a map.

If you want to ask them whether they are hungry, in an instant you can see that translates to affamato in Italian, głodny in Polish, nälkäinen in Finnish, and so on. The tool is not perfect: faim is French for ‘hunger’ rather than for ‘hungry’; but that’s because the French express the sentiment of a grumbling, empty stomach as ‘(having) hunger’, i.e. ‘avoir faim’.

Also: no help in pronouncing the words, and it would help if you could read the Greek and Cyrillic alphabets. But other than that… 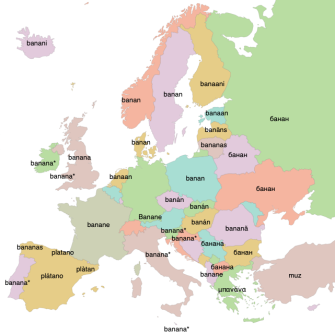 Some words are near-universal in Europe.

The word translations are the standard ones generated by Google Translate, but it’s interesting to see all of them together on a map. For one, because it shows how closely related some languages are. Hongerig in Dutch is close enough to hungrig in Swedish not to need translating. Polish ‘hungry’ is cognate with the word in most other Slavic languages.

But the map also shows how far apart such basic words can be, especially if we consider smaller and/or isolated languages. The hard Irish word for hunger, ocras, sounds much harsher than the soft Basque gose. The long-winded Greek lament (peinasmenos) is opposed by aç, the single-syllabled call to action of Turkish.

And then there’s just plain weirdness. The Romanian word for hunger, flămând, also is the French word for ‘Flemish’. 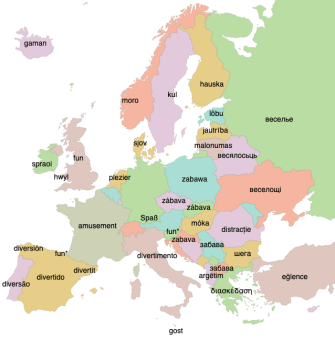 Repetition of the English word followed by an asterisk means Google Translate doesn’t have that word in that particular language. Either that, or Basques and Slovenes have no word for fun.

In contrast, some words have managed to inveigle themselves into almost all languages on the map, and have become almost universal, or at least Euro-versal. Go on, ask if your unexpected guests would like a banana. Or if you can order them a taxi.

While they’re waiting to leave, you could see if you have any good intentions in common for the New Year. Like lay off the booze – sprut in Danish, girtauti in Lithuanian and, winningly cwrw in Welsh. Or take up jogging. That’s skokk in Icelandic, hölkkä in Finnish and jogging in most other European languages. In Albanian, it’s vrapim me ecje të shuar – just saying it gets one out of breath. Whichever your intentions for 2020 are, they’ll probably be over soon: aviat in Catalonian, or drīz as the Estonians say.

Mr. Trimble’s word translator is a simple adaptation of a widely available service, but it offers a lot of insight into the richness of Europe’s linguistic variety. Not to mention hours of fun. (móka in Hungary, Spaß in Germany, zábava in Slovakia…)

Many thanks to Mr. Trimble. Here is his European Word Translator.

Can a shared language promote peace? Some people think so.
Life

Let’s hope that squid don’t evolve lungs and legs, or humanity might be in real trouble.
Leadership

Could we use quantum communication to talk to aliens?

Quantum communication offers a surer path to sending an interstellar message, as well as receiving one. But can we do it?
Up Next
Starts With A Bang

This event, observed in the ATLAS detector at CERN in 2017, shows the production of both a Higgs boson and a Z boson simultaneously. The two blue tracks are high-energy […]