This rug would really tie any map-lover’s room together. It is the product of two venerable map-making traditions, one eastern, the other western.

Since at least the time of the Soviet occupation (1979-’89), Afghanistan is the source of so-called ‘war rugs’: carpets depicting the instruments of modern warfare rather than ancient geometric patterns (see #395).

This particular rug fits into that tradition – except that it appears to be much, much older. The image it copies is one of the iterations of the famous ‘serio-comic’ maps that were popularised by Fred W. Rose and translated across Europe in the decades preceding World War I (See #521). 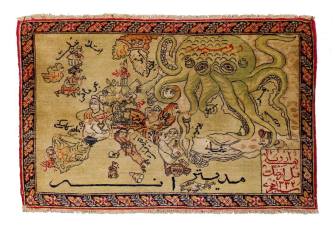 These maps showed animate versions of European nations, variously trampling, shoving and strangling each other. This rug is an almost identical copy of the Fred W. Rose map. Its main feature is Russia as an octopus, stretching out its tentacles towards Central Europe, the Balkans and the Middle East.

Spain and Portugal are recognisably cast in the same awkward position across the Iberian peninsula. France is represented by a female form rather than the moustachioed gentleman in the Rose map, but this version of Marianne seems to be wearing a Muslim headscarf rather than a Phrygian cap. The maiden representing the Austro-Hungarian Empire is no longer bare-chested, and also more modestly dressed. 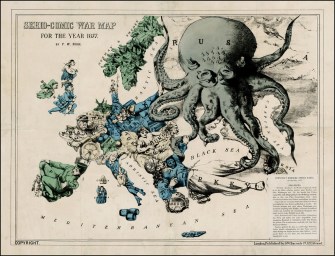 This map appeared here on Reddit‘s Mapporn section, without further indication of source or context. Who can offer a translation for the words on the rug in Arabic script – and/or offer an indication of its provenance, age and motivation?

UPDATE (16 December 2017) – Below some more information on the content of the map/rug. Thanks all contributors!

Tom R., of Iranian descent, says the writing on the map is Persian as used before the 1950s, and suspects the map dates from 1920s Iran. “The writing in the box at the bottom corner says: Map of Europe before the war of 1914. (=1322 in the Islamic lunar calendar)”. Some other observations by Tom:

Jordan Toy concurs that the writing is in Persian, adding that “it looks like water features are in black and countries are in red”. Some translations:

Philippe L. also tried his hand at translating the main elements of the map, and produced this annotated version. 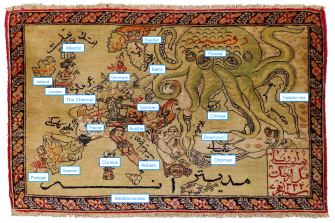 He agrees that the map is in Farsi (Persian), and offers the following observations:

Got more? Send your input to: [email protected].

Related
Starts With A Bang
Ask Ethan: What are white holes, and do they really exist?
In General Relativity, white holes are just as mathematically plausible as black holes. Black holes are real; what about white holes?
Life
Strange life forms create an “alien” ecosystem in an abandoned uranium mine
Slimy biofilms made up of bacterial and eukaryotic life forms have taken over an abandoned, flooded uranium mine in Germany.
Hard Science
Earth has an eerie “sodium glow,” and astronomers use it to image stars
Air currents in our atmosphere limit the resolving power of giant telescopes, but computers and artificial stars can sharpen the blur.
Health
How saliva changes the flavor of food
“It’s a liquid, but it’s not just a liquid.”
High Culture
Why are flood myths so common in stories from ancient cultures around the world?
Could the prevalence of flood myths around the world tell us something about early human migration or even the way our brains work?
Up Next
Starts With A Bang
The Largest Black Hole Merger Of All-Time Is Coming, And Soon
Sometimes, you look in a nearby galaxy, and what you find beyond it will change everything.Einstein’s theory of General Relativity has withstood every test for more than a century.The General […]