Cross-language communication is about to get much easier thanks to a smart new tool cooked up by Google. 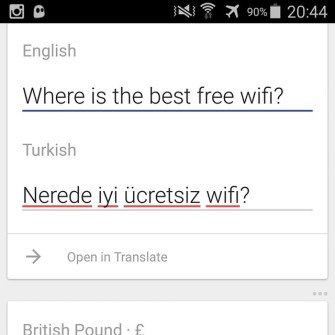 Interpreter is coming to mobile

As of last week, the tech giant’s real-time language translation tool, Interpreter, is now accessible on mobile, both on iOS and Android devices. This snazzy feature is integrated within the Google Assistant app and is activated by saying, “Hey Google, be my Ukrainian translator.” Or whichever of its 44 available languages you need help with.

Then, violà, a linguistic assistant is at your service. The tool will translate your speech and read it out loud along with offering a real-time translated transcript that appears in text bubbles. Say you’re traveling in a non-English speaking country and are trying to chat with someone, this feature would help both parties follow along. Additionally, the tool offers Smart Replies similar to Gmail, short phrases you can add that the A.l.-powered software thinks might be natural follow-ups so you can smoothly keep the conversation rolling. Google Lens, which is integrated into Assistant on Android phones, allows you to use your phone’s camera to take pictures of a text, like a sign, and have the words converted into a different language.

Before now, Interpreter Mode was only available on Google Home smart speakers and displays –– which isn’t exactly conducive in real world situations. Unfortunately, for the time being, you’ll need to be online to make the app work.

From the very beginning, language has been a central element to the human species’ ability to form lasting bonds and empathize with one another. Not only that, but as Noam Chomsky has said, “The structure of language determines not only thought, but reality itself.” A 2013 study by researchers at Yale suggested this might be right. The technology being created by Google right now lets us step into the cultural worlds created by language by easily dissolving linguistic barriers.

Clearly this new software makes communication easier when traveling or crossing paths with a foreign tourist. As long as you have a strong WiFi signal or enough data, it should take most people with a mobile device minimum effort to strike up a conversation abroad. (And get directions to the nearest bathroom.) More than that, it’s likely to change the kinds of interactions and experiences individuals have when engaging with someone who speaks a different language. Even in countries where you can slide by using English, you can only experience the culture on a surface level without knowledge of the local language. Through easy, real-time translation, individuals will be able to better immerse themselves in new cultures and connect with others in more intimate, fulfilling ways.

This isn’t just great for traveling. The world is rapidly becoming more globalized and this technology has the potential to bust down the language barriers that might keep us from fully bonding with our fellow citizens, co-workers, neighbors, and family members whose first language might not be English. For instance, in 2018, the United States Hispanic population reached a record 59.9 million and is continuing to grow. By some estimates, the U.S. will have more Spanish speakers than any other country by 2050.

Easier than ever to learn another language

Even if tools like Interpreter makes it easy to rely on technology to compute language translations, there’s numerous benefits to actually learning a language. It correlates to higher academic achievement on standardized test scores, helps enhance a student’s reading abilities, is associated with improved cognitive ability, and might even offset age-related cognitive losses. Research also backs the idea that people who learn another language develop a more positive attitude toward the people of that language. Americans already lag shamefully far behind the rest of the world in speaking a second language, so hopefully Google’s new tool will spark interest in learning the languages provided rather than just translating words into English.

Language is an invaluable source of culture and identity for communities. As the linguistic topography of our nation changes, it can be argued that Americans have a civic duty to embrace other languages, such as Spanish, which are now part of the country’s makeup. A linguistically diverse world benefits us all, and Google’s breakthrough translation technology seems to be arriving at just the right moment.

Tags
googleimmigrationlanguagesocietysoftwaretechnologytravel
In this article
googleimmigrationlanguagesocietysoftwaretechnologytravel
Related
High Culture
5 great (and underrated) songs about cities
Most popular songs are about love and heartache. But some great songs — albeit underrated and perhaps a bit weird — are about the cities we love.
High Culture
Machu Picchu has changed Peru — for better and for worse
If tourism is the lifeblood of the Peruvian economy, then Machu Picchu is the heart pumping that blood — in sickness and in health.
Strange Maps
The Viking woman who sailed to America and walked to Rome
The amazing life of “Gudrid the Far-Traveled” was unjustly overshadowed by her in-laws, Erik the Red and Leif Erikson.
The Present
The real reasons we turn on “airplane mode” when we fly
Shouldn’t “flight mode” be obsolete?
Strange Maps
An interactive map with bizarre poems about England
Is the dumpster in the alley worthy of a poem?
Up Next
Strange Maps
Cyclist draws festive reindeer on map of London
Giant Christmas image took 80 miles and nine hours to make