European Capitals Replaced by Cities with the Same Latitude

How did New York end up there? 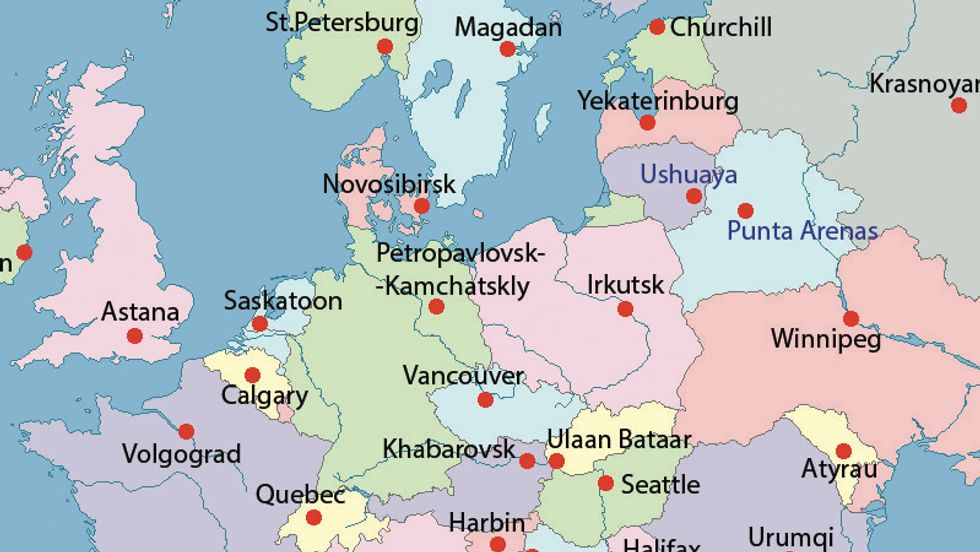 Please nobody show this map to the President. He might get the wrong idea and bomb the bejeezus out of Lisbon. Because the Portuguese capital – that red dot in the bottom left corner on the map below – is labelled Pyongyang. And that's the name of another country's capital. North Korea, to be exact.

Is this map a cunning ploy by that country's nuke-wielding dictatorship to misdirect America's retaliatory strikes in case the Korean War, frozen for most of a century, hots up again? Well, if the President can't keep his Kims apart and can't tell whether his ships are sailing towards or away from Korea, who says he can identify the DPRK on a world map?

But no, don't pin this on Kim. The other dots on the map, all capitals of Europe, have also been relabelled as cities in other parts of the world. The link between each capital dot and its replacement city is that both places share the same latitude: black if the other city is in the northern hemisphere as well, blue if it is on the same latitude, but in the southern hemisphere.

The result is a map that is spectacularly misdirective. Lots of dots now have North American names attached to them. Madrid is on the same latitude as New York. Las Vegas takes over from Algiers. The Eternal City has transformed in the Windy City, as Chicago settles on the shores of the Tiber. Dublin reveals itself to be Edmonton, the capital of the Canadian province of Alberta.

Prague and nearby Budapest are now Vancouver and nearby Seattle. The capitals of Croatia, Serbia and Bosnia are recast as Canadian cities, never before as close together as here in the former Yugoslavia: Montreal, Halifax and Toronto.

But Russia takes over a fair bit of Europe too. Wonderful Copenhagen changes into the less inviting-sounding Novosibirsk, a couple of thousand miles to the east. Paris wakes up one morning to find itself replaced by Volgograd, the Hero City once known as Stalingrad.

Berlin, Germany's cosmopolitan capital, gets a make-over as Petropavlovsk-Kamchatsky, a frontier town and the only city on the Kamchatka Peninsula in Russia's Far East. Oslo becomes the stylish former capital of St. Petersburg, while Stockholm has to settle for Magadan, the Far Eastern city the name of which once was synonymous with the Gulag Archipelago.

A handful of antipodean cities dot the map: Istanbul becomes Puerto Montt, a Chilean port city that by comparison is both extremely young and tiny. Minsk becomes Punta Arenas, also in Chile, the largest city in the world below 46° south. Vilnius is Ushuaya, in Argentina, often labelled the southernmost city in the world (1). Tirana, the capital of Albania, becomes Wellington, the capital of New Zealand.

So, what does it benefit us to know that Beijing and Athens are on the same latitude; that London is as far from Pole and Equator as is Astana, the capital of Kazakhstan; or that Chicago and Tashkent are roughly on the level?

Nothing very practical: similar latitudes are no guarantee for similar climates. Chicago is a lot colder than Rome, for example. Places that share latitudes do get the same amount of daylight and nighttime as each other – with longer nights in winter and longer days in summer the further north each pair of cities are located. But this only works if they're on the same hemisphere.

Perhaps the randomness of the comparison is the true attraction of this map. The places where we were born, live and work are a large, often unquestioned part of who we are. What if those places got all mixed up? Who would we be in Madrid instead of New York, or Pyongyang instead of Lisbon?

Many thanks to Martin M. Foldager for sending in this map.

(1) the title is contested between Punta Arenas, Ushuaia and Puerto Williams. Since the exact position of all three cities is well established, the dispute must centre on which of them is big enough to be called a city.