Large cities, not countries are the future centres of world power. They will become islands of good governance in a world in which globalisation has eroded the nation state. That point was argued in #768, which emphasises population size and growth as yardsticks for metropolitan importance across Europe.

An even more crucial measure is economic power, expressed in GDP. By that measure, the ten richest large urban conglomerations in the world are each worth more than entire countries – including some of the world’s biggest economies.

This map compares the 2015 Gross Domestic Product in Purchasing Power Parity, expressed in billions of dollars, of the world’s ten richest metro areas to that of countries with a similar GDP-PPP$. 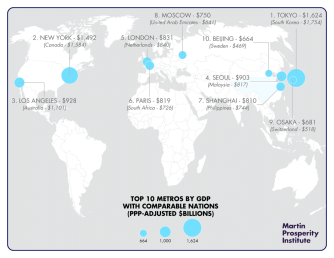 This map was published on CityLab, a web community dedicated to urban development co-founded and edited by Richard Florida (1). The map itself was designed by the Martin Prosperity Institute, based on data from the Brookings Institution (for the cities) and the World Bank‘s World Development Indicators (for the countries).

In his article, Mr. Florida points out that these ten metros together have a GDP-PPP of $9.5 trillion, more than Japan and Germany combined. If you took the 20 largest metro areas, you would almost equal the U.S.’s $18-trillion-dollar GDP:

“In other words: Cities are the new power centers of the global economy – the platforms for innovation, entrepreneurship, and economic growth. But (…) they remain beholden to increasingly anachronistic and backward-looking nation-states (…)”

We wanted to see how countries and cities outside the Top 10 stacked up. Unable to retrace a World Bank dataset with the exact figures quoted on the map, we found this dataset, also from the World Bank. Below is an overview of the 200 biggest economies in the world, countries in blue, cities in yellow. GDP is expressed in billions of dollars. 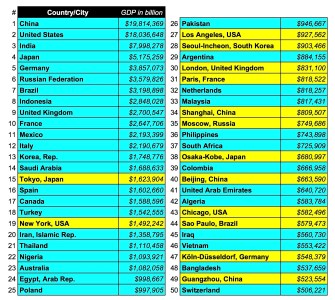 Among the 50 strongest economies, and apart from the ten cities shown on the above map, four more cities crop up: Chicago and Sao Paulo, both with almost the same GDP as Algeria. The Cologne-Düsseldorf conurbation in western Germany turns over more money than Bangladesh, the eighth-most populous nation on earth. Guangzhou in China almost produces the same GDP as Bangladesh. 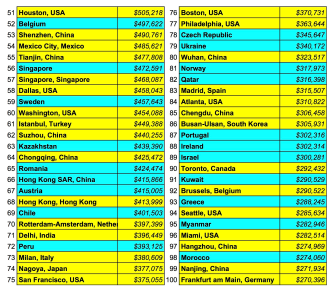 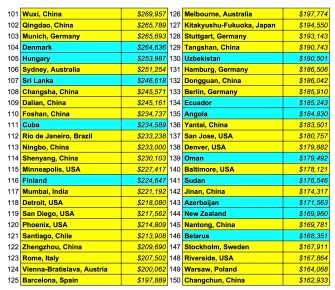 Quite a number of Chinese cities in the next 50, all quite unfamiliar to the uninitiated. Yet Wuxi and Qingdao each have a GDP greater than Denmark’s; Changsha, Dalian and Foshan each outperform Cuba; and Ningbo and Shenyang separately have an economy bigger than that of Finland. 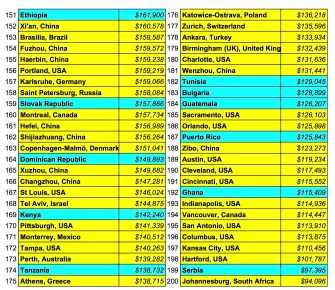 The last 50 of this overview are almost all cities, with a sprinkling of smaller national economies. But still remarkable to see how a medium-sized city like Karlsruhe can out-earn the entire Slovak Republic, or Tampa trump Tanzania.

(1) in the light of these results soon to be renamed Richard Miami – sorry, I have yet to encounter a bad pun I can resist.

Related
Neuropsych
Daily caffeine intake temporarily alters your brain structure
Compared to people who took a placebo, the brains of those who took caffeine pills had a temporarily smaller gray matter volume.
Thinking
Why you should laugh at yourself, according to Seneca and Nietzsche
“It is more human to laugh at life than to lament it.”
Hard Science
The violence of the Tonga eruption is a wake-up call to watch other submarine volcanoes
Out of sight, but not out of mind.
The Present
How circular economics can make us happier and less stressed
Entrenched business wisdom says that community-led economic systems are pure fantasy. Douglas Rushkoff disagrees.
The Learning Curve
The art of asking the right questions
The right questions are those sparked from the joy of discovery.
Up Next
Starts With A Bang
A 200 year old lesson: Scientific predictions are worthless unless tested
Your theory predicts something novel? How nice. But no one will pay you any mind unless you test it.“He who loves practice without theory is like the sailor who boards ship […]