You can’t step in the same river twice, but still it flows in the same direction. That is how Heraclitus sticks in my mind.

Like many other presocratic philosophers, Heraclitus lived on the shores of Asia Minor, but his ideas leapt across the Aegean Sea to mainland Greece and eventually to further parts of Europe.

That’s the same route followed by the stream of the migrants now flowing into Europe. Different river, same direction.

By the same token, that migration itself is both new and old. Barrel bombs and rubber dinghies are recent inventions, but ancient times had push and pull factors of their own, with the Middle East as the starting point and Europe as the destination.

As this map shows, hunter-gatherers emerged in the area between the Nile and Euphrates some 1,600 generations ago. As they pushed into Europe, the local Neanderthals must have grumbled about those bloody foreigners taking over everything, probably not too dissimilar from nativist sentiment across the continent today (or to Stewart Lee’s anti-anti-immigration rant). 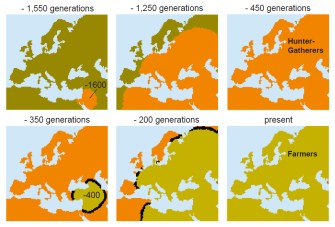 But rivers gonna flow, and about 1,250 generations ago, the Middle-Eastern hunter-gatherers had penetrated deep into Europe and North Africa, leaving only a fringe on the Atlantic side of the continent free from their presence. By 450 generations ago, there was nobody else left. The last Neanderthals we know of, died about 24,000 years ago in a cave in Gibraltar.

The flow of history started repeating itself about 400 generations ago, when agriculture took root in the Fertile Crescent. It spread much more rapidly than hunting and gathering did so many generations before, but essentially followed the same pattern: sweeping into Europe and North Africa, leaving out only the western edges of both continents about 200 generations ago.

Granted, the map labelling the present population of Europe exclusively as ‘farmers’ is a bit outdated. Surely, the dominant occupation across the continent should be ‘office drone’, and that grim mode of survival probably originated in a nondescript industrial estate on the outskirts of Peterborough rather than in the Middle East; but let me stop defeating my own point.

The point being that Europe’s ‘native’ population is as Middle-Eastern in origin as the flow of migrants currently knocking on the continent’s doors. Tensions caused by that migration bring to mind another cultural import from that region – not the philosophy of the presocratics, but the rather more depressing story of the farmer Cain, who killed his brother, Abel the shepherd.

“Salvator Mundi” sold for a record-breaking $450 million in 2017, but is it really as valuable as people were led to believe?
Up Next
Thinking