There are many attempts to improve student performance which result in a host of measures, ranging from misguided to inspired. Such efforts include not assigning students homework, recalibrating standardized tests to account for unfair background advantages, or subjecting students to the hard-to-fathom Common Core standards. But a recent endeavor in the UK found another solution which actually appeared to have worked – the students were taught philosophy!

A study published last year demonstrated that 9 to 10 year olds, who took part in a year-long series of philosophy-oriented lessons, showed significant improvement in scores over their peers in a control group. The study involved over 3000 children in 48 primary schools all around England. The kids who were taking philosophy classes improved their math and reading skills by about two months of additional progress compared to the students who didn’t take the classes.

The actual aim of the classes was to improve student confidence in asking questions and constructing arguments, but the additional academic gains were undeniable. 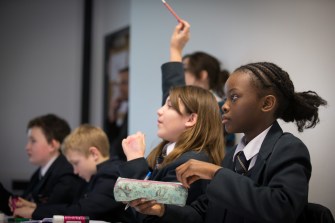 What did the students do in these weekly hour-long classes? They talked about such concepts as knowledge, truth, justice, fairness, contemplating questions like “Should a healthy heart be donated to a person who has not looked after themselves?” or “Is it OK to deprive someone of their freedom?”  They also had time set apart for silent reflection.

It’s also noteworthy, that particular academic improvements were seen among students from disadvantaged backgrounds. The reading skills of those who took the classes improved by 4 months, and math skills by 3 months.

There were other benefits as well.

“Feedback from teachers throughout the trial suggests that the philosophy sessions created an opportunity to engage with pupils and develop a whole school culture of thinking, listening, speaking, and using logical arguments,” wrote researchers Stephen Gorard, Nadia Siddiqui, and Beng Huat See from Durham University in their paper on the study. “They claimed it also had a beneficial impact on wider outcomes such as confidence, patience and self-esteem.”

Interestingly, the “Philosophy for Children” (P4C) program was originally developed in 1970 in the U.S. by Professor Matthew Lipman from New Jersey, which led to the  establishment  of the  Institute  for  the  Advancement  of  Philosophy  for  Children  (IAPC).  Lipman  and  his colleagues  did an initial small study of their program in 1980 using 40  students from  two schools in the Montclair District of New Jersey.

The students were split into two groups, with the “intervention  group”  being taught  P4C twice a  week  for  nine weeks  by  Lipman,  while  the  control  group  was  being  taught  social studies.  Lipman’s study  reported  significant  gains  in  logical  reasoning  and  reading,  as measured  by the  California  Test  of  Mental  Maturity  (CTMM).  The reported differences  in reading  scores  were  tested and found to be similarly advanced  2.5  years  later.

The results of another, larger  experiment  were made available in 2004. This time 200 students were tested (100 per group) over a two-year period. The researchers again reported significant improvements  in  reading  and  critical thinking. 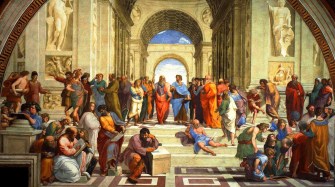 You can read the full UK study here.

A group of prominent scientists shares how research has changed them.
High Culture

Harmony and moderation make for a happier life.
Up Next
Culture & Religion

Many were afraid of California’s Public Safety Realignment policy, but research shows that reductions in the prison population haven’t increased crime. Here’s how perceptions play a big role in what we think about criminal justice.