The drink of conquerors? Not wine, or rum, or even the blood of your enemies – but milk. Plain old milk.

Recent scientific discoveries suggest that the spread of farming across prehistoric Europe may have gone hand in hand with the increase in lactose tolerance. This would have given the invading farmers and herders a crucial advantage over the native hunter-gatherers.

Lactose is a complex sugar occurring in milk (less in other dairy products). Like other mammals, humans in their infancy produce lactase, an enzyme that helps them digest their mother’s milk. Once weaned, most mammals stop producing lactase, after which they become lactose intolerant. Symptoms, although not always severe, may include nausea, cramps, flatulence, diarrhoea and vomiting.

Most human populations, however, have developed some degree of lactase persistence, enabling them to digest milk beyond the breast-feeding stage. It is estimated that 75% of the overall world population undergoes some decrease in lactase production, but that figure varies widely, in accordance with the genetic heritage of particular populations. Northern Europeans show only a 5% decrease in lactase production throughout their adult lives, whereas that figure is over 70% in Southern Europe. The fraction of adult lactose intolerance can be as high as 90% in some African and Asian countries.

The long, slow process of towards adult lactose tolerance started some time after the last ice age, as humanity was switching from hunting and gathering to a somewhat less precarious subsistence on agriculture. About 10 millennia ago, Middle Eastern farmers worked out a way to decrease the lactose levels in milk by fermenting it into yoghurt or cheese. Eventually, a genetic mutation led to lactase persistence in some populations, allowing them to drink milk throughout their adult lives. This would have been a valuable evolutionary advantage over lactose-intolerant people, who would have less nutritional options when crops failed. 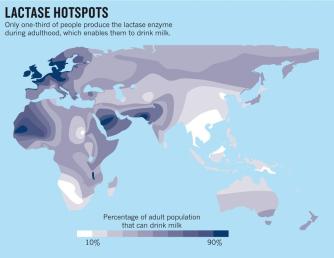 This map shows the lactase hotspots of the Old World [1], with the Lands of the Milk Drinkers marked in the darkest hues. There are four core areas with a population over 90% lactose-tolerant: western Africa (in an area roughly contingent with modern Mauritania), the middle part of the Arabian peninsula, the Indus estuary (in southern Pakistan) and the north west of Europe (including the British Isles, southern Scandinavia and the coastal areas of the continent, with one deep jut into central Europe). The layer-like distribution of consecutive zones of decreasing lactose tolerance seems to indicate that the Milk Drinkers, in each of these four zones, were able to progress deep into the territories of their lacteally challenged neighbours.

The map also points to a handful of zones where these lactase-deficient peoples reign supreme. The areas of lightest shading, indicating less than 10% of the population are lactose tolerant, are in southern Africa (most of Namibia, parts of South Africa), a small island in the east of Sudan (Darfur?), a tiny area on the Bo Hai Sea in China (not far from present-day Beijing), and a large zone in southern China, also covering most of Birma/Myanmar, all of Thailand, Laos, Cambodia and Vietnam, Malaysia (including the northern part of Borneo), and a part of Papua New Guinea.

These lightest areas too are surrounded by radiant zones, but the lactose-intolerant zones don’t radiate out, but in. One clue is their location: mostly in remote, sparsely populated areas [2]. The zone in southern Africa, for example, is notable for its Khoisan population, the hunting-gathering remnant of the region’s original, pre-Bantu peoples.

The ability to hold down milk is of course but one of many dietary factors that contributed to the evolutionary success of certain strains of humanity. Making the right choice as to which crops to grow, which animals to husband and which areas to explore all contributed to a tribe’s multiplication – or annihilation. But this map indicates that the milk factor, isolated and mapped out, can be a meaningful tool to interpret the ebb and flow of certain human migration patterns.

Many thanks to Roi Espino Cid for sending in this map, found here on PBS. This recent piece on the PBS website deals with the milk/conquest issue, but doesn’t seem to refer directly to the map.

[1] I.e. Europe, Africa and Asia, the three continents (partly) known to the Ancients, interconnected and interacting before the discovery of the New World (i.e. the Americas) and Australia (although Australia too is included on this map).

[2] Beijing and the South East Asia are of course anything but sparsely populated; but we suppose this map reflects the genetic disposition of pre-modern populations, before recent waves of regional and global migration reduced the statistical relevance of ‘native’ populations.

De-extinction, if it is ever possible, will not be simple.
Up Next
Culture & Religion

How Men and Women Think About Risk (Hint: Differently)

When faced with the classical risk dilemma—receive small gains now versus a big gain later—men and women have different ways of evaluating what is the best course of action.