“Give me a good sharp knife and a good sharp cheese, and I’m a happy man”. Perhaps not a quote you’d expect from the creative mind behind Game of Thrones, but maybe George R.R. Martin is onto something. 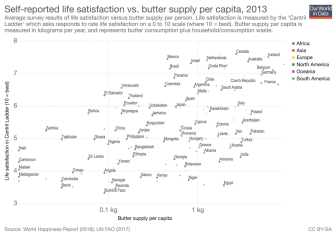 According to this infographic, there is a clear, statistical link between self-reported levels of life satisfaction in countries worldwide (vertical axis) and the per-capita supply of dairy products — in this case, butter (horizontal axis).

Of course, butter is not cheese: for one thing, it contains only trace elements of casein, a chemical compound associated with dairy, but much more prevalent in cheese, which causes a feeling of euphoria.

Yet as the map shows, an abundance of butter does make people happy. Or could it be a case of correlation instead of causation? In that case, something else influences both life satisfaction and the availability of butter to go up and down together. Perhaps… the associated availability of cheese? 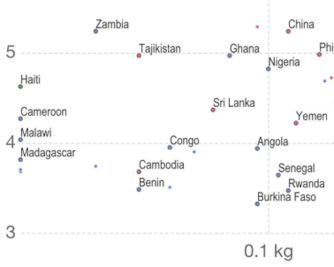 No butter, no joy

So, what does the map actually show? On the horizontal axis, the butter supply per capita:

For those countries (and those plotted near them on this graph), low, middling or abundant per-capita butter supply corresponds with low, middling and high levels of life satisfaction: 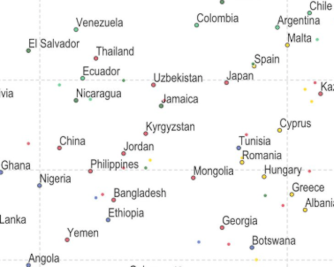 Middle of the road, in both categories

On the other hand, Egyptians get more than 1 kg of butter per year yet linger on the wrong side of 4/10 on the “Cantril Ladder,” which measures life satisfaction. 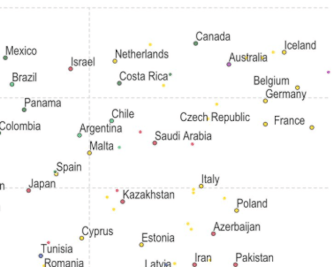 Happiness is a warm knife. Through butter. Lots of butter

Nevertheless: “In my time studying global food and nutrition I’ve never seen the issue (illustrated) with such clarity,” says Hannah Ritchie, an environmental scientist and data visualization specialist at Oxford University, who published this graph on her Twitter.

Ritchie is the co-author of Our World in Data, which uses infographics to illuminate a broad range of subjects, including population, health, energy, the environment and, yes, food.

Humans are wired for short-term thinking according to neuroscience, making it difficult to save for retirement.
▸
6 min
—
with
Big Think
The Present

A textbook pregnancy consists of three trimesters. The baby develops at a relatively predictable rate during this time, from pomegranate seed to avocado to watermelon. And mom’s body adapts accordingly […]
Up Next
Think Again Podcasts

Will Hunt (explorer) – into the Earth: the mysteries and meanings of underground spaces

The catacombs of Paris. Secret graffiti beneath NYC. The hidden cities of Cappadocia. Writer and explorer Will Hunt is your philosophical tour guide to what lies beneath.