We expect maps to tell us the truth. That is their eternal promise. But maps can’t help lying to us. That is their original sin. To be more precise: the map’s lie (or sin) is one of omission. They show us just one version of the truth, carefully edited by the cartographer.

This map does one better: it gives us not one but two versions of reality. Both are contained within the same frame, staged on a single world, denoted by an identical set of shading. All you need to do is tilt the image a quarter turn, and the cartographic form reveals an alternate version of the truth, while remaining entirely commensurate with the first one.

Clever and simple, as most brilliant things are.

The map shows you the world as it is in Nineteen Eighty-Four, George Orwell’s political parable of a dystopian future (he wrote it in 1948) in which the world is dominated by three totalitarian superstates.

The book is set in Airstrip One, “once called England or Britain”, a province of Oceania. This superstate covers North and South America, Australia and New Zealand, southern Africa and large parts of middle and western Africa.

The second superstate is Eurasia, which covers continental Europe, Russia all the way to the Bering Strait, a small sliver of North Africa and a big chunk of the Middle East and Central Asia. The smallest superpower, at least in area, is Eastasia, essentially China, Japan, Korea and the northern half of the Indian subcontinent. 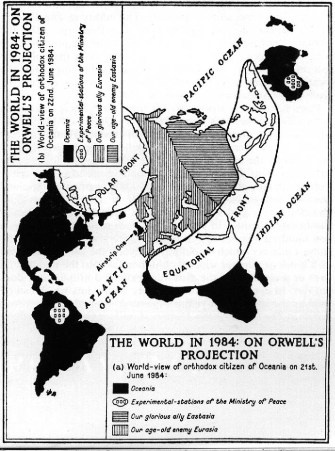 These three superstates are engaged in a war for global dominance. The battle is fought in two contested zones: the Polar Front, covering the North Pole plus northern Greenland and bits northern Canada and Siberia; and the Equatorial Front, a zone stretching from North Africa via the Arabian peninsula and the southern half of the Indian subcontinent all the way to New Guinea.

And perhaps the war is eternal also because this suits the powers that be. It provides justification for the totalitarian surveillance state, which polices the very thoughts of its citizens and edits facts to fit its current version of history – all in the name of the greater good: the victory of the collective (at the expense of individual freedom).

The citizens of Airstrip One know that to survive they must obey the state. And the best way to do that, is to believe the lies it tells them. If Big Brother tells you two plus two equals five, then it does…

Or if one of his lieutenants suddenly announces that your enemy is now your ally, and vice versa:

“On a scarlet-draped platform an orator of the Inner Party, a small lean man with disproportionately long arms and a large bald skull over which a few lank locks straggled, was haranguing the crowd. A little Rumpelstiltskin figure, contorted with hatred, he gripped the neck of the microphone with one hand while the other, enormous at the end of a bony arm, clawed the air menacingly above his head. His voice, made metallic by the amplifiers, boomed forth an endless catalogue of atrocities, massacres, deportations, lootings, rapings, torture of prisoners, bombing of civilians, lying propaganda, unjust aggressions, broken treaties. It was almost impossible to listen to him without being first convinced and then maddened. At every few moments the fury of the crowd boiled over and the voice of the speaker was drowned by a wild beast-like roaring that rose uncontrollably from thousands of throats. The most savage yells of all came from the schoolchildren.”

“The speech had been proceeding for perhaps twenty minutes when a messenger hurried on to the platform and a scrap of paper was slipped into the speaker’s hand. He unrolled and read it without pausing in his speech. Nothing altered in his voice or manner, or in the content of what he was saying, but suddenly the names were different. Without words said, a wave of understanding rippled through the crowd. Oceania was at war with Eastasia!”

“The next moment there was a tremendous commotion. The banners and posters with which the square was decorated were all wrong! Quite half of them had the wrong faces on them. It was sabotage! The agents of Goldstein had been at work! There was a riotous interlude while posters were ripped from the walls, banners torn to shreds and trampled underfoot. The Spies performed prodigies of activity in clambering over the rooftops and cutting the streamers that fluttered from the chimneys.”

“But within two or three minutes it was all over. The orator, still gripping the neck of the microphone, his shoulders hunched forward, his free hand clawing at the air, had gone straight on with his speech. One minute more, and the feral roars of rage were again bursting from the crowd. The Hate continued exactly as before, except that the target had been changed […] Oceania was not after all at war with Eurasia. Oceania was at war with Eastasia. Eurasia was an ally.”

In portrait orientation, the map legend describes how orthodox citizens of Oceania would have viewed the world on 21st June 1984, on the eve of this speech. With their own Oceania in bold, reassuring black [1], territory marked in horizontal stripes denotes ‘our glorious ally Eastasia’ and the area covered by vertical stripes is ‘our age-old enemy Eurasia’.

Tilt the map to landscape. The legend now gives the date as 22nd June 1984, and is different by a tiny but crucial detail: the horizontal stripes now denote ‘our glorious ally Eurasia‘, and the vertical ones ‘our age-old enemy Eastasia‘. Although horizontal stripes still identify the ally and vertical stripes the enemy, the alliances have switched. 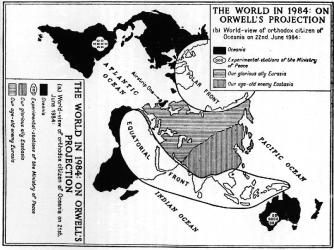 Winston Smith, Nineteen Eighty-Four‘s protagonist, works at the Ministry of Truth, where his job is to eradicate newly inconvenient truths from photos, newspaper archives and encyclopaedia entries. All evidence of what was previously self-evident and true must be destroyed by throwing it in the Memory Hole.

This map, by pointing out the before and after simultaneously, would have been tantamount to blasphemy. But, by pointing out the similarities between two opposites, it hints at the frightening ease with which an audience preconditioned to Doublethink can process cognitive dissonance in accordance with the ruling ideology.

Or, as David Kendall, who found this map here on The Visual Telling of Stories, puts it rather more straightforwardly: “You tell me that isn’t the most clever use of shading, orthography, and legend placement to ever grace the printed page”.

[1] White areas with box symbols denote “[…] the experimental stations hidden in the Brazilian forests, or in the Australian desert, or on lost islands of the Antarctic, [where] the teams of experts [of the Ministry of Peace] are indefatigably at work.”

While most participants fibbed a little bit, laptop users were much more likely to lie – and by a lot more.
Up Next
Politics & Current Affairs

Wendy Kopp on How Technology Can Improve Education

“Education must be the only sector that hasn’t already been completely revolutionized by technology,” says Wendy Kopp, the CEO and co-founder of Teach For All, and the founder and chair […]