The Eruv, a Jewish Quantum State

To Orthodox Jews, eruvin are a crucial component to their faith. To everybody else, it is as if they didn’t even exist 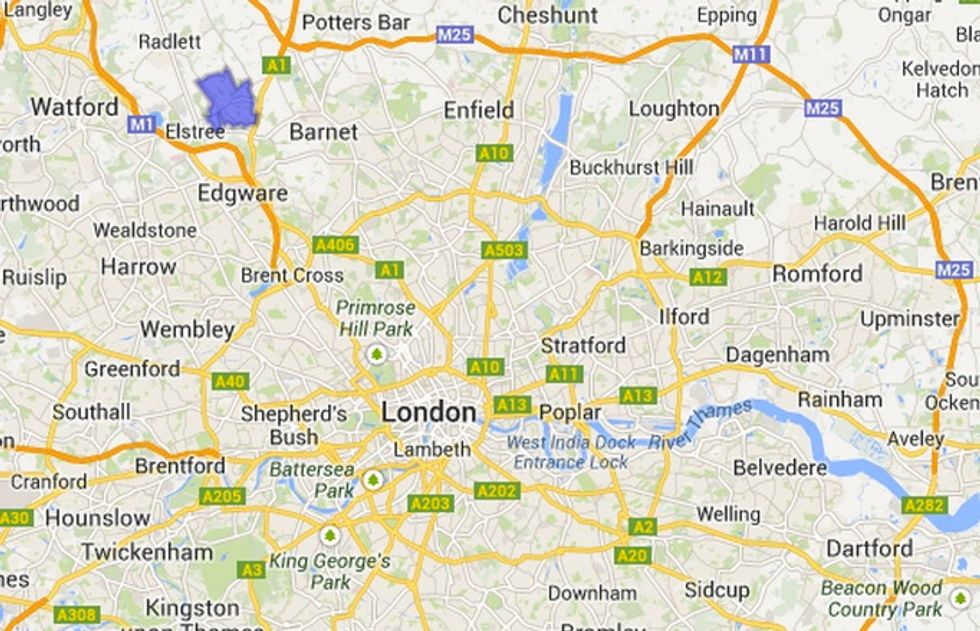 Home isn’t where your heart is, where you make your bed or even where you lay your hat. It is where you draw the line that separates what’s yours from what’s not. This line surrounds your inner sanctum and - if it’s reinforced by a fence - keeps out the big bad wolf, who stalks the great outdoors.

To appreciate the primal nature of humanity’s fence-building instinct, consider this trio of cognate [1] words: a Zaun is a German fence, a tuin is a Dutch garden, and a town is an English settlement of a certain size [2]. The German word, which describes the enclosing entity itself, has remained closest to the original meaning. Dutch and English both focus on the enclosed area, yet each on an area of different nature and magnitude [3].

As with many other human instincts [4], drawing lines and building fences as a means of distinguishing between us and them has been consecrated in religion. Over the past decade or so of intense Islam-scrutiny, much has been made of the division of the world in Dar-ul-Islam (the House of Submission) and Dar-ul-Harb (the House of Strife) [5]. However, Christianity too had the habit of distinguishing between Christendom and everywhere else; at some point, Europe became the favoured synonym, and its fluctuating borders concurred with the outer limits of the Grand Turk’s domains - from the gates of Vienna to the gates of Constantinople, as history’s tide would have it.

But the human desire to fence in home and fence out everything else is sacralised nowhere as formidably precise as in Judaism.

The location of the Elstree and Borehamwood eruv, established in 2010, within Greater London.

Observant Jews are obliged to follow the 613 commandments [6] of the Halakha. For Orthodox Jews, this includes minute adherence to the strictures of the Sabbath [7], which entail 39 activities forbidden on that day, among them: cooking, weaving, slaughtering, writing, lighting a fire, and transferring objects.

This last stricture is ruled by the Laws of Transference. Deriving from a couple of Bible verses [8], this prohibition has grown into a bewilderingly complex set of rules by millennia of interpretation and elaboration. A quick taster:

A close-up of the Elstree and Borehamwood eruv. Notice the non-eruv pene-enclave in the south-west: the borders run along the train tracks northwards until they are connected by Allam Road bridge, just north of the station (images: eboreruv.org).

On the sabbath, it is thus not permitted to carry one’s keys, food, medication, or even one's children (or push wheelchairs and strollers), to and from the home. In case you’re wondering whether Orthodox Jews have to disrobe to go outside on the sabbath: wearing clothes is permissible, as they are considered ‘part of the person’ (and as long as they’re not showy). But extra clothing, such as a precautionary raincoat, or even a prayer shawl, is not permitted.

An eruv is a legalistic solution to this problem: by establishing a symbolic enclosure in a certain area, observant Jews effectively extend their ‘home’ to the outer limits of that enclosure. On the sabbath, they can now ‘carry’ objects within the entire eruv [9].

An eruv can coincide with existing city walls, but in modern times is usually established by connecting rope and/or string to walls, railway lines and other pre-existing structures. Utility poles are often used to construct a symbolic passageway in and out of the eruv: the poles on either side of a road function as the doorposts, a wire connecting the top of the poles is the lintel. The enclosure should have a minimum height of 10 tefachim [10], and should not include public thoroughfares or areas too far outside city boundaries.

Needless to say, there is plenty of lively debate about the exact definition of an eruv, and consequently about the validity of certain eruvs. The scope of these shabbos [11] strings is limited in any case by a very practical consideration: each week, the entire length of the wire and other elements that constitute the eruv’s boundary needs to be rechecked, repaired in case of a breach, and reapproved in time for the start of the sabbath on Friday evening.

As crucial as the establishment of an eruv is for the observant Jewish community, for the outside world it is of no practical consequence - all but invisible and completely irrelevant, except for such times when utility and public works that may interfere with the eruv’s integrity. Ideally such issues can be resolved as an element of public works management. Or, as related by this cabalistic legend, by the intervention of a universally respected sage:

When Mordecai Benet was Chief Rabbi of Moravia (1789-1829), the Jews of Nikolsburg (now Mikulow, Czech Republic) wanted to establish an eruv chain. The only missing link in the chain was a house on the Quergasse, on the edge of the Jewish part of town. It was owned by Topolanski the Butcher, who refused permission. Not that he minded himself, but he was concerned his neighbours (i.e. customers) would object to the presence of a non-Christian symbol running along the top of his house. When asked to mediate, Rabbi Benet, promised to bless the Butcher's house as a protection against fire. The Butcher consented, and (as the legend goes), the house was spared in the many fires that swept through the town in the following decades, and it survived into the first half of the 20th century.

However, in spite of their merely symbolic, ritualistic significance, the proposed establishment of eruvin has occasionally led to objections and protests: by non-Jews, on the grounds that they constituted some sort of territorial claim to the enclosed area; but also by other Jews, who might consider the conditions for establishing a particular eruv as insufficiently fulfilled. Or who might question the whole idea of eruvin itself: How does finding a loophole in the letter of the Law not constitute a breach of its spirit?

Be that as it may, there are at present about 200 eruvin outside Israel (and many more in the Jewish state itself), each the result of careful exegesis [12] and dialogue with local governments, and each possessing a fascinating cartographic persona. With their clear, linear demarcations, they are reminiscent of electoral districts - except that within these borders congregate not the constituents of a Congresswoman or Member of Parliament, but the faithful flock of the Supremely Unelected One.

Both rooted in the desire to conform to God’s law and subject to nuts-and-bolts inspection and maintenance like any other public utility, eruvin are a curious hybrid of the divine and the mundane. To believers, they are of paramount ritual importance; to non-believers, it’s almost as if they weren’t there. This simultaneous existence and non-existence of eruvin is reminiscent of the quantum state of Schrödinger’s cat, both alive and dead in that box.

That quantum state might be the eruv’s most important achievement: the fence that separates us from them is redefined as purely abstract and symbolic, relevant only to those who choose to acknowledge it. An interesting alternative to the territorial exclusivity claimed by many of the world’s religions - and indeed nation states.

[1] Cognates are words within the same language (or across different ones) that share some resemblance and the same etymology, but don’t necessarily mean the same thing. The common root for the three words mentioned here is the Proto-Germanic word tūną, which means ‘enclosure’. ↩

[3] For a similar discrepancy, see the cognates yard (in English) and the Russian suffix -grad (for ‘city’). ↩

[4] Compare the traditional male custom to carry a weapon: largely disappeared in the developed world (except, arguably, in the US); ubiquitous but ceremonial in Yemen, where every adult male carries a jambiya; and a religious requirement for male Sikhs, who after baptism must carry a kirpan at all times. ↩

[5] The distinction is more legalistic (hence more complicated) than the black-and-white dichotomy oft repeated in the public debate.  ↩

[6] Listed in the Torah, these mitzvot (singular: mitzvah, ‘law’) are referred to as the Mosaic Law, or simply the Law. They include (ranking provided by Maimonides) the following commandments: to know there is a God (#1), to not even think there are other gods (#2), [for men] not to shave off the hair from the sides of their head (#68), to bless the Almighty after a meal (#85), not to have sexual relations with your father’s brother’s wife (#151), not to cook meat and milk together (#196), to leave a corner of the field uncut for the poor (#239), not to burn honey or yeast at the altar (#347), not to move a boundary marker to steal someone’s property (#472), to break the neck of a calf by the river valley following an unsolved murder (#491), to make a guard rail around flat roofs (#494), to remember what Amalek did to the Jewish people (#599), and not to panic and retreat during battle (#610). ↩

[7] God rested on the seventh day of Creation, hence the commandment to rest on that day of the week, which for Jews starts at sundown on Friday, and ends when three stars are visible in the Saturday night sky. ↩

[8] Exodus (16:29): ‘See that the LORD hath given you the sabbath; therefore He giveth you on the sixth day the bread of two days; abide ye every man in his place, let no man go out of his place on the seventh day’; and Jeremiah (17:21): ‘[T]hus saith the LORD: Take heed for the sake of your souls, and bear no burden on the sabbath day, nor bring it in by the gates of Jerusalem[.]’ ↩

[9] Some things remain forbidden even within an eruv, such as carrying a mobile phone or a wallet, going shopping or playing football, and opening an umbrella (too much like erecting a tent, hence a ‘building’ activity). ↩

[11] The Yiddish-language derivation of sabbath (which is a Hebrew word). A Jewish person who is committed to observing the sabbath is said to be Shomer Shabbos.  ↩

[12] See this Jerusalem Post article for a small sample of the questions in play.  ↩