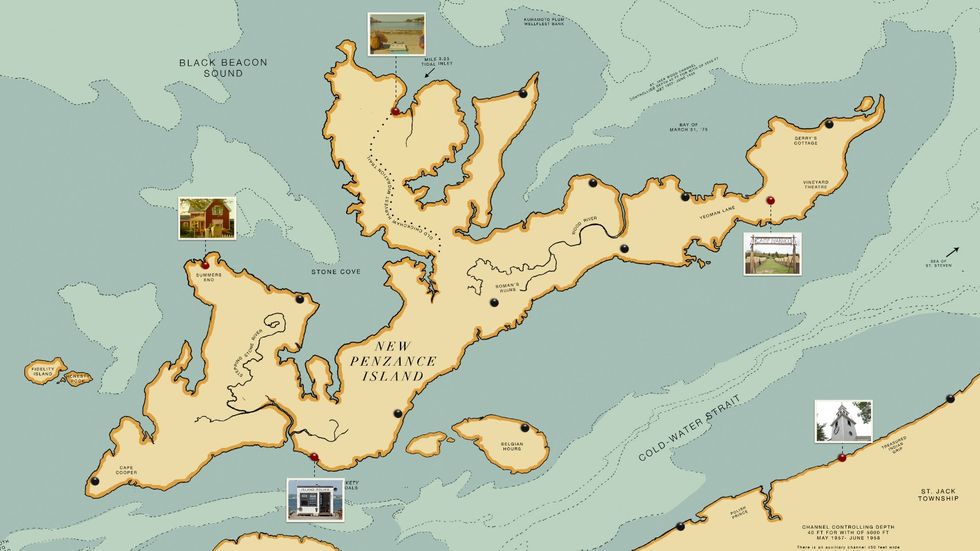 How do you know you’re watching a Wes Anderson movie? Here are a few clues: an abundance of matching tracksuits, official school attire, or other types of uniform; a nostalgic setting in a recent, pre-digital past; and a panoply of dysfunctional characters, inhabiting meticulously manicured houses.

Those houses, like the movies themselves, are the cinematic equivalent of the late-renaissance Wunderkammer, stuffed with curious artifacts and remarkable specimens from nature. Mr Anderson maintains his baroque predilection for gorgeous props in Moonrise Kingdom. Arguably the most central of these precious objects is a map of New Penzance Island, the place where most of the action takes place.

The map is shown as a background to the introductory narration. It is also instrumental to the pair of wayward path-finders at the centre of the story. In the tradition of map-enhanced adventure stories [1], the map is of a fictional island, rife with rugged coasts and sheltering coves, defined by jutting capes, and supplemented with a fair helping of auxiliary islets. The fictional island thus possesses all the attributes necessary for a classic adventure story.

Anderson adds another layer: New Penzance Island also is that archetypal place, increasingly distant and appealing as we get older, where it’s always summer and we are forever young. The golden place of eternal youth has often been imagined as an island in the distant west - the Greeks and Romans called them the Fortunate Islands, to the Irish storytellers it was Avalon, or Tir Na n’Og.

But while those islands were set only very vaguely in yonder oceans, New Penzance can be pinpointed with more precision: the Khaki Scouts of North America, and the Old Chikchaw Harvest Migration Trail, even though both named after fictional collectives, point towards a general geographical area. The look and feel of the island, its vegetation, climate and settlement suggest an island off the New England coast [2].

But that’s as precise as it gets. The map is completely fictional, and doesn’t include any reference to real places. And even though the story is set over a short, specific period in the summer of 1965, it seems to take place outside of time. Nothing of whatever was happening during those summer months [3] in America or the world intrudes upon the island’s edenic isolation.

The map itself is pretty hard to find too - in its entirety, at least. The movie’s website features it prominently, aptly using it as a guide to Moonrise Kingdom, but only allows close-up scrolling. The version presented here, puzzled together by yours truly one screenshot at a time, is to my knowledge the only complete one [4] floating around the internet.

New Penzance takes up a central location on the map. The island consists of a n elongated land mass, oriented southwest to northeast, with a large, north-facing, double-headed promontory bolted onto the middle. The easternmost point is named as Cape Cooper, on a small cape between it and the large promontory lies Summer’s End, which features prominently in the film. Other locations on the island are Roman’s Ruins [5], near its centre, and Yeoman Lane, Vineyard Theatre and Berry’s Cottage near the unnamed, eastern cape.

The two streams shown on the island are the Stepping Stone River and the Wood river. The named bodies of water around the island are: Stone Cove; Black Beacon Sound; Mile 3.25 Tidal Inlet [6]; Kumamoto Plum Wellfleet Bank; the St Jack Wood Channel; the Bay of March 31, ‘75 [7]; the Sea of St Stephen; and the Cold-Water Strait.

In the waters off Cape Cooper, an arrow points South to Gogo.

The tiny islands surrounding New Penzance carry particularly intriguing names. Just off the west coast: Fidelity Island and Honesty Rock, almost hugging each other. South of Roman’s Ruins: a trio of islands curiously reminiscent of the small-tiny-large sequence of the Maltese archipelago, with the larger island named Belgian Hours.

Across the Cold-Water Strait, we see what might be the mainland (or perhaps just another island), containing another national reference: Polish Prince (just to the west of Lily’s Look-Out). Further along the coast is a place called Treasured Indian Grip, north of St Jack Township, inland. To the east of this landmass, possibly connected to it, is another hunk of dry land, its top bit named Fort Stockhausen.

Only a few of those names crop up in the film, but Wes Anderson being the detail-obsessed filmmaker he is, they probably each have some significance. Your guess is as good as - and if you’re a fan, probably better than - mine. (Fire away!)

Which leaves the name of the island itself: New Penzance. The name obviously refers to the coastal town in Cornwall. One review contributes a remarkable thesis as to the significance of its choice:

[2] It was in fact filmed in Newport, Rhode Island.

[4] I say complete, but I mean: less than complete. Some missing areas near the map’s edge have been reconstituted to look like the original. And the map is also lacking its longitudinal and latitudinal edge markings.

[5] Surely a tongue-in-cheek reference to the Roman ruins found on so many (European, North African and Middle Eastern) maps.

[6] An all too prosaic description, renamed in the film to more poetic effect.