On East German transit maps of Berlin, the city's western enclave was an unmentionable obstacle 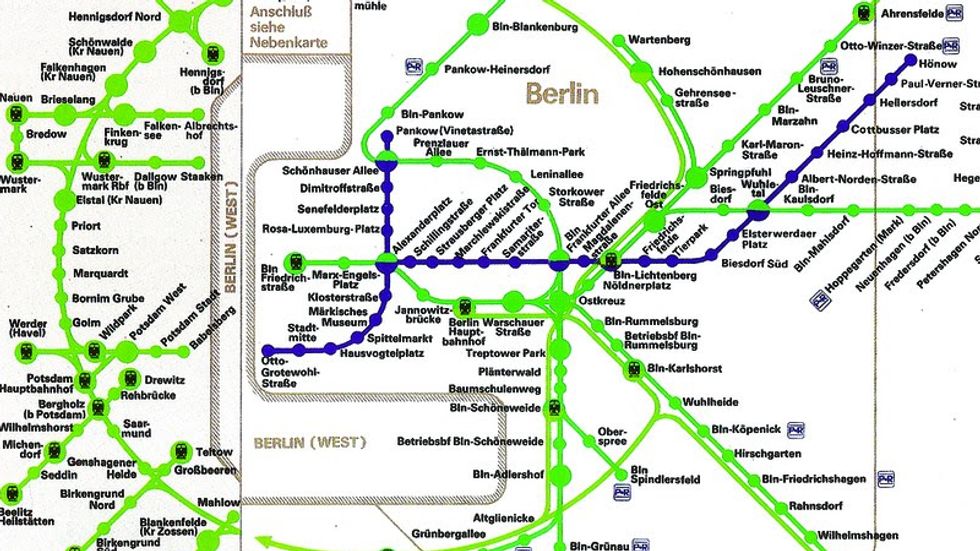 Every map holds a promise, and hides a lie. Cartography purports to represent reality, so the map reader can navigate the world. But maps only exist because their makers manipulate reality, if only by selecting what to show. Maps always represent some kind of truth, but never the whole truth. If you know who made the map, you’re generally able to make a stab at the narrative behind it - and which story it isn’t telling.

Take this map of the urban transport network (1) in Berlin. At face value, it is a purely utilitarian map, giving its readers a no-nonsense, schematic overview of the transportational possibilities of the German capital. But context matters: this map was produced by the East German government, for its captive citizenry. It mixes information with propaganda as it tries very hard to ignore an inconvenient truth - too big to hide completely: the existence of another Berlin.

During the Cold War (1945-1989), world politics interfered with even the most basic elements of German toponymy. The country was divided in an eastern and western half, aligned with the Soviet and Western blocs respectively. The nomenclature reflected either state’s carefully maintained fiction that only it represented Germany as a whole (2). West Germany never officially referred to itself as ‘western’ but called itself the Bundesrepublik Deutschland (Federal Republic of Germany). Similarly, East Germany never self-applied the moniker Ostdeutschland, but chose Deutsche Demokratische Republik (German Democratic Republic). The geographic, limitative name was generally reserved for the other half (3).

This national schizophrenia was replayed on an urban level in Berlin. Its eastern half was capital of East Germany, the Soviets’ most westerly outpost in Europe; its western half an enclave of West Germany, and a showcase for its Wirtschaftswunder (4). Both hemi-cities aspired to be Berlin’s one and only true incarnation, uncorrupted and unoccupied by the evil forces of either communism or capitalism. Hence the reluctance of either side to label itself as merely half of Berlin - official certificates for birth, marriage and death in both parts of the city were always issued in ‘Berlin’.

The official East German nomenclature treated the city’s division with the most circumspect of euphemisms - at least when referring to its own half, successively Groß-Berlin, demokratischer Sektor (Democratic Sector of Greater Berlin) over demokratisches Berlin (Democratic Berlin) to Berlin, Hauptstadt der DDR (Berlin, Capital of the German Democratic Republic). Never, ever: Ostberlin. After all, it was the Wessis who were enclaved, not the Ossis (5). Those Ossis therefore had no qualms in referring to the western sector as Westberlin or Berlin (West), whichever sounded more diminutive. Correspondingly, the official West German names for East Berlin were Berlin (Ost), Berlin (DDR), Ost-Berlin, Ostberlin, and even Ostsektor (Eastern Sector).

Because of its special political geography, Berlin became a flashpoint in the Cold War, which almost turned hot when the Soviets blockaded the city’s western half in 1948. The freedom and prosperity of West Berlin also challenged the communist East’s claims of moral superiority (or at least equivalence). The hemorrhaging of East German talent, ‘voting with its feet’ to live in the West, led to the construction in 1961 of the Berlin Wall (6).

This map shows what happened next in the minds of the East German authorities: West Berlin atrophied, ceasing to exist as anything but a minor irritant to cartographers.The area served by the green S-Bahn is proudly marked as Berlin, its lines overflowing into the neighbouring districts of Potsdam and Frankfurt-an-der-Oder. A clever ruse explains the diminutive size of Berlin (West): the lines extending westward into Potsdam district are shown on a separate map, overlapping the main map. The missing distance is rendered by arrows, connecting the lines on both maps. Those lines completely encircle West Berlin, greatly diminished by the overlap. Intriguingly, the overlap, where East eats West, creates two holes in the Staatsgrenze (national border) between both Berlins. Loopholes in the East’s cartographic logic? The encircling East Berlin lines look a bit like Pac-Man, the puny West Berlin nothing more than a freshly eaten, half-digested enemy.

It is quite remarkable how Berlin (West) is presented simply as a nondescript obstacle: not a single landmark is named, as if it is deepest, darkest Africa at the beginning of the nineteenth century. Nor are any of the S-Bahn or U-Bahn lines shown. This is due to the underground counterpart of the Berlin Wall, severing almost all links between the transport systems of both sides. This resulted in numerous so-called Geisterbahnhöfe (ghost stations), abandoned as the Wall went up (and projected downward) on 13th August, 1961, particularly on two U-Bahn lines and one S-Bahn line connecting different areas of West Berlin via the Mitte (centre), in East Berlin. Western trains would not stop, but slow down, permitting close visual inspection of these eerie metro stations.

The one exception was the station at Berlin-Friedrichstraße in East Berlin, where West Berliners could switch between one U-Bahn and two S-Bahn lines. Western traffic flowed next to Eastern, both flows hermetically sealed off from one another by an airport-style border control installation.

Many thanks to Mark Ovenden, who provided this image. It’s in his book Railway Maps of the World.

(1) Consisting of U-Bahn (short for Untergrundbahn, or underground rail) and S-Bahn (short for Stadtschnellbahn, or urban rail, a more extensive, largely suburban and mainly overground network of lines).

(2) Not as big a leap of the imagination as it might seem. For most of its existence, Germany had been a fragmented jumble of dukedoms, principalities and kingdoms, an idea rather than a state.

(3) The East German authorities often deviously rephrased the official geonym for West Germany as Deutsche Bundesrepublik, thereby consciously highlighting the ‘Democratic’ adjective (and the supposed democratic nature) of their own state. This made it quite easy to spot Western apologists for the East: they used the abbreviation DBR for West Germany, instead of the more common BRD.

(4) West Germany’s ‘economic miracle’, which saw the country transform itself, post-war, from rags to riches at breakneck speed.

(5) Shorthand for West and East German(s), also after Unification (which itself gave rise to neologisms like Ostalgie, for many former East Germans' hankering for the comforts of their demised state.

(6) Dubbed an ‘antifascist defensive wall’ by the East German authorities.