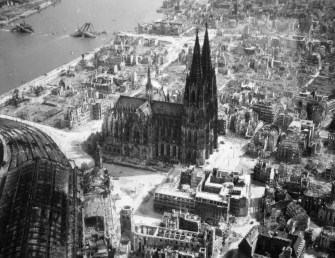 “If just one English bomber reaches the Ruhr, my name is no longer Hermann Göring, but Hermann Meier,” the Luftwaffe commander boasted in August 1939.

Over the following five and a half years, millions of Germans cursed ‘Hermann Meier’ as Allied bombing churned up city after German city. The air raid sirens that announced yet another wave of British or American bombers were nicknamed, with vicious relish, ‘Meier trumpets’.

On this map of Germany, drawn up in 1947, black pie slices indicate how much of each city was flattened in the war—mostly by aerial bombardments. It reflects the dizzying scale of destruction in Germany, a fact not often dwelled upon in histories of the Second World War. Understandable, since Germany started it—both the war and bombing civilians—the overall sentiment is: They had it coming.

The history of the air war is nevertheless instructive, for it shows the special kind of hell that is mechanized warfare. As in earlier wars, both sides became inured to slaughter as the fighting dragged on. But in modern conflicts like WWII, science and industry drive a frantic arms race to make the killing ever more efficient.

Before the war, targeting civilians was considered off-limits. But as the fighting started, moral compasses soon went haywire. Under the guise of ‘demoralizing the enemy’, killing large numbers of civilians became an accepted military objective. The Germans blitzed Warsaw in September 1939, Rotterdam in May 1940, and London soon thereafter. By early 1941, the German air war on Britain had claimed 41,000 lives and caused widespread destruction. London lost more than a million buildings in the war; the center of Coventry was wiped out in one night; and 95 percent of houses in Hull were damaged or destroyed.

The Royal Air Force retaliated, but its main strategy remained: Precision bombardments on strategic targets – industrial sites, rail and road infrastructure and the like. Then came the Butt Report (sic). Published in August 1941, it revealed that only one in three RAF bombers that managed to drop their payload over Germany did so within 5 miles (8 km) of its target. That shocking statistic eventually led to a change of strategy: In February 1942, under the new leadership of air marshal Richard Harris, RAF Bomber Command switched to ‘area bombing’ a.k.a. carpet bombing. Harris’ tenacious pursuit of the new strategy, sometimes in the face of contrary evidence, would earn him the nicknames “Bomber Harris” and “Butcher Harris”. 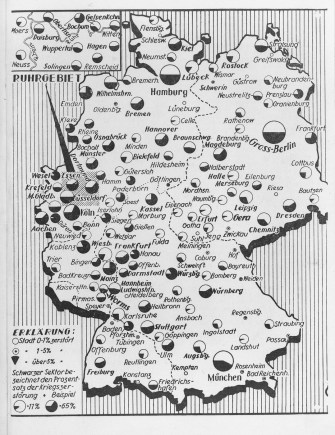 The destruction is concentrated in the industrial cities in the west and the largest cities throughout the country.Image: G.W. Harmssen, Reparationen, Sozialprodukt, Lebensstandard (1947), in Deutsche Geschichte in Dokumenten und Bildern.

Cologne was the first major German city to get ‘area bombed’: On the night of May 30, 1942, over 1,000 RAF aircraft dropped around 1,500 tons of bombs, causing large-scale destruction and over 2,000 large fires. Over the course of that year, many other German cities would get the carpet treatment during RAF night raids. From January 1943, the USAF joined in, with daylight raids.

The air war over Germany turned increasingly deadly—both for the Allied crews in the skies and the German civilians on the ground. By the spring of 1943, less than 20 percent of RAF airmen made it alive to the end of a 30-mission tour.

Throughout 1943 into early 1944, the three major operations of the air war were:

In the first half of 1944, the air war seemed to trail off; but as the ground war neared its end, the aerial campaign intensified as never before:

By the end of the war, technical advances and operational expertise allowed the Allies to increase the destructiveness of their air raids. In the night of February 1945, a single attack sufficed to create a firestorm that destroyed 90 percent of the inner city of Dresden.

Göring/Meier’s Luftwaffe having largely been eliminated, the RAF and US Air Force sought to maximize the advantage of their air supremacy. That’s why 60 percent of all Allied bombs dropped on Germany fell in the last nine months of the war, in a massive effort to break German resistance, shorten the war and save Allied lives.

Could that apocalypse have been avoided? German historian Klaus von Beyme once mused: “If the Putsch of 20 July 1944 [Stauffenberg’s failed assassination of Hitler] had been successful and resulted in a peace treaty, Germany’s cities would have been spared 72% of all bombs that were to fall by war’s end.” That’s a big What if, because it assumes the Allies by mid-1944 would have been content with something less than unconditional surrender, even from a Germany without Hitler. 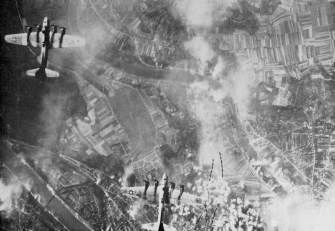 In the real world, the wheels of destruction kept turning until May 8, 1945, when Germany did surrender unconditionally. Eventually, the air war claimed the lives of about 600,000 Germans. When the time came to take stock of the destruction, this is what the shell-shocked survivors found.

In Germany, the end of WWII was Stunde Null (‘Zero Hour’). Everything had to be built up from the ground, both literally—the cities—and figuratively—civil society and democratic institutions.

Some cities chose to rebuild the past, reconstructing ancient buildings and street patterns. Others opted for modernity and functionality, often with an urban layout centered around the car, as in American cities. In many cases, however, the destruction was so complete that no effort to rebuild could erase the void that the air war had created—a void that haunts many German city centers to this day.

Like Dua Lipa, he had to create new rules.
Up Next
The Present

Why Amartya Sen remains the century’s great critic of capitalism