Amazon’s critically acclaimed series The Man in the High Castle, based on the Philip K. Dick novel, is a counter-factual historical tale that examines a United States controlled by Axis forces. While maps of the imagined territory dominate the publicity for the television series, and the cover of Dick’s novels, the author himself was scant on specify geographical details — perhaps for a good reason.

It’s 1962 in an America that has lost World War II. Nazi Germany rules the eastern half of the country, while Japan dominates a puppet state on the West Coast. Separating their domains is a neutral zone spanning the Rocky Mountains. The pilot for The Man in the High Castle opens with a map plotting out that grim alternative to our reality. In Philip K. Dick’s original novel, the references to geography are deliberately, tantalizingly scant. Can a map —especially a fictional one — be too precise?

“I guess there is a lot of latitude in what you can say when writing about a topic that does not exist”, Dick says in How to Build a Universe That Doesn’t Fall Apart Two Days Later [1]. Carefully mixing the familiar with the fantastical, Dick paints a convincing picture of the Zeitgeist in occupied America (spoiler alert: it’s dreary).

But another reason the universe of The Man in the High Castle holds up so well is the writer’s parsimonious use of geopolitical detail. Readers picking up those breadcrumbs of information follow the trail of their imagination to an illusion of their own making. Like any trompe l’oeuil, that illusion benefits from the fuzziness of detail and is produced in the mind of the observer. Or, to return to the lecture mentioned above: “Latent structure is master of obvious structure” [2].

Dick’s parsimony works on another level as well: the obliqueness of his portrait of Axis-occupied America reinforces its realism. In that universe, everybody already knows what the map looks like, so there is no need to describe it in extenso.

Most of the story is set in the Pacific States of America, a Japanese puppet state on the West Coast. The exact nature of Japanese domination is never discussed, and there is just one reference to the extent of the PSA’s territory:

If he failed to get justification there, he would make his way to one of the Import-Export Trade Missions which operated out of Tokyo, and which had offices throughout California, Oregon, Washington, and the parts of Nevada included in the Pacific States of America. But if he failed successfully to plead there… Plans roamed his mind as he lay in bed gazing up at the ancient light fixture in the ceiling. He could for instance slip across into the Rocky Mountain States.

The Pacific States of America are mentioned only three times in the book (and referenced another 15 times as “PSA”). The quote above is as precise as its geography gets.

The Rocky Mountain States get only two mentions in full, one of which in the quote above, and only three times as “RMS.” We know that Canon City, Colorado, lies in the RMS, and that the Nazi rockets flying to the West Coast have no interest in “Utah, Wyoming or the eastern part of Nevada,” presumably meaning these lands are part of the RMS. Of their political makeup, we only know, again mentioned only in passing, that they are “loosely banded to the PSA.”

The book mentions a separate entity for the South (the former Confederate States of America). This would make sense from a divide-and-conquer point of view, but little if any mention is made as to the actual status of the South within (or outside) the “new” US. The world outside North America is described with an even broader brush, but the few elements we hear paint a terrifying picture of the effect of a worldwide Axis victory. The Germans have drained the Mediterranean and turned the seabed into farmland. It also says they have landed on both the moon and Mars. German ally Italy has been “rewarded” with its own “little empire in the Middle East.” The Japanese are clearing rainforest in South America to build cities. They also control large swathes of the Asia-Pacific area, including Australia and New Zealand.

So how to translate this to the screen? If war and conquest are the theme of your production, few props are as explanatory or satisfying as sticking a map in the opening credits [3]. Hence the understandable choice to use a map of High Castle North America in the pilot. It allows the German Eagle to spread its wings across the Midwest, clutching a wreathed swastika that blots out the sun over Memphis and thereabouts. For those still in doubt as to the Eagle’s business, the caption above reads Greater Nazi Reich [4]. 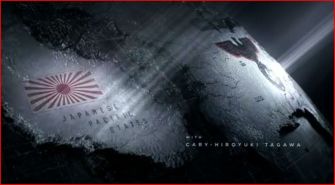 A more modest Rising Sun Flag is draped over sections of Nevada and California, indicating Japanese overlordship in the West [5]. Nothing marks out the Rocky Mountain States but darkness and the twists and turns of its eastern and western borders. Both suggest that the whole area is a natural chasm, a Grand Canyon on an even grander scale instead of a man-made neutral zone. That swathe of territory doesn’t match up with the only reference made to it in the book. It does not seem to include Washington or Oregon entirely, but does appear to extend to the east of Nevada, placing the border between PSA (or JPS) and RMS somewhere in Utah, perhaps. 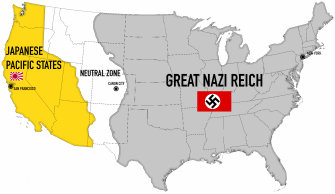 Of course, someone made the effort to freeze-frame the opening sequence to produce a more clear-lined representation of the three zones, overlaid on a map showing the state lines (good man!) It shows the eastern RMS border snaking its way through Montana, Wyoming, Colorado, and New Mexico, including a good chunk of Texas west of the Pecos. The western border of this Canada-to-Mexico corridor indeed leaves in a bit of Washington and Oregon, half of Utah, almost all of Idaho. It leaves out almost all of Arizona.

It’s not clear why these borders are so jagged. At first sight, they don’t seem to follow river courses, height lines or other landscape features. Which would make them impractically long to police or defend. And anyway, most conquerors are too busy conquering to change existing borders [6], contenting themselves with subduing, taxing or slaughtering the conquered population.

Dick’s universe begins to fall apart even more when comparing this map to previous efforts, drawn up to illustrate editions of the book. 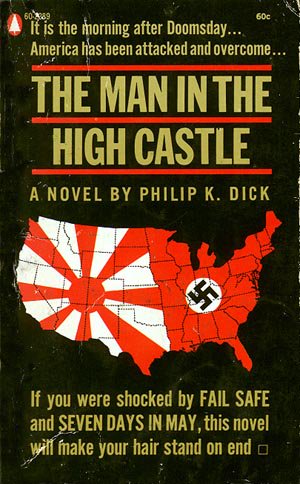 This edition shows a map of the Lower 48 states divided between Japan and Nazi Germany — eliminating the Rocky Mountain States. The map’s shock value trumps its accuracy. It’s unclear why the German-Japanese border is where it is, except that this line, from the Canada-Minnesota-North Dakota tripoint down to where Texas and Louisiana reach the Gulf, is fairly straight, and divides the country in two, or close enough. 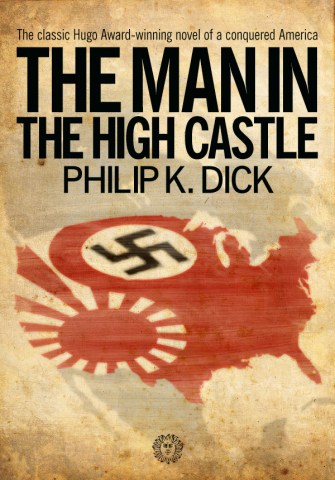 This edition also eliminates the neutral zone. But it also does away with any semblance of an actual border between Japanese and German spheres of influence. The swirl might be seen as an inversion of the yin-yang symbol, appropriately “oriental” in this context. The greater “German” land mass may reflect the dominant position of the Nazis in their relation to the Japanese, both in North American territory and on a global level (the Nazis are the only ones to have “The Bomb”).

This world map faithfully includes Washington and Oregon in the PSA, as well as western Nevada. The RMS is an extremely wide buffer, including both Dakotas, Nebraska, Kansas, Oklahoma and Texas, as well as Montana, Idaho, Wyoming, Colorado, Utah, Arizona, New Mexico and half of Nevada.The Greater German Reich encompasses most of Europe and Russia halfway to Siberia, Central Asia, Iran and Arabia, as well as most of Africa. Also: Greenland, Newfoundland and Labrador, and northern South America. Britain, France, the Netherlands and Norway are occupied, and not (yet) absorbed into the Reich proper. Canada remains free, apparently. Italy rules a vast empire in southern Europe and northern and eastern Africa, now contiguous thanks to the draining of the Mediterranean. Imperial Japan has annexed coastal Asia, and controls much of the rest of the continent (up to and including India) via its Co-Prosperity Sphere, which also includes the Pacific and the non-German part of South America.

Compare that picture to this map, supposedly reflecting the same reality. Japan is the sole master of Central and South America. The RMS has shrunk to a shadow of its other self. The drained Mediterranean is German now, separating Italy from its Northern African Empire. Germany occupies half of India, and Japan’s annexations cut much deeper into Asia.

A third world map presents yet more permutations: the American South is shown separately; all of Nevada is now RMS (which extends all the way to Ohio). Canada has fallen to the Nazis and the Mediterranean farmland apparently belongs to neither Germany nor Italy. The middle part of the former Soviet Union is designated separately as Lebensraum; the whole of Africa is Nazi-controlled; and the Italian Empire is limited to the Balkans.

In the end, the best map of Dick’s Nazi America is the one showing the least detail, choosing symbolism over the lost cause of accuracy. This cover for a Finnish edition of the book [7] substitutes a hamburger for a map of the states, and two little food flags for German and Japanese dominance. The same message as the map in the pilot, and none of its inaccuracies. 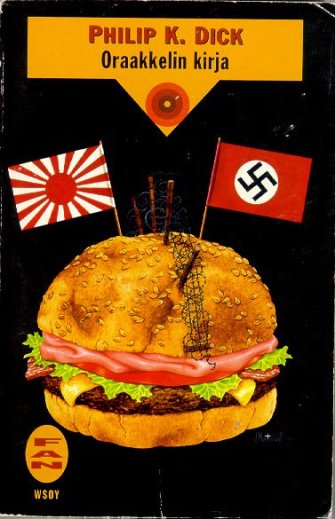 Sometimes, the best map is no map at all…

[1] In this lecture from 1982, Dick explains how his work explores the true nature of reality, and of humanity. It’s funny, erudite, and bizarre. Full text here.

[2] One of the few Fragments directly attributable to Heraclitus. All of them collected here.

[4] A much smaller United States exists, but as a satellite state of this Reich. The 50 stars in the canton of the US flag have been replaced by a swastika.

Cosmology in the 21st Century