What if these Drainage Districts had become the essential units of government?

Powell's water-based states, or How the West wasn't won 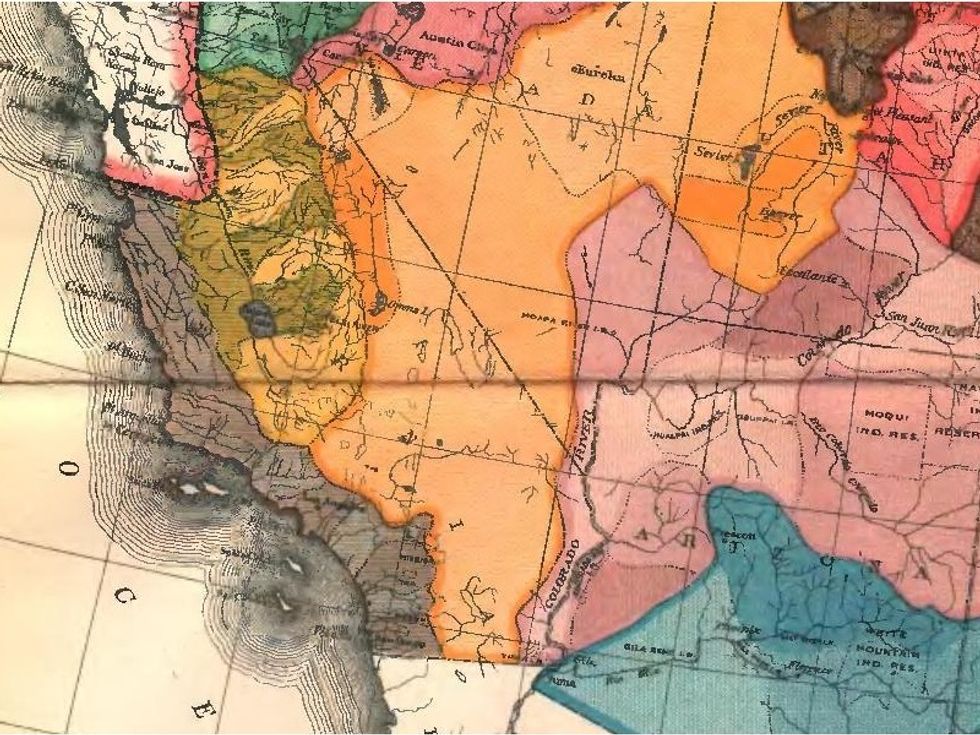 The prototypical American border is the straight line. Not a single US state lacks one (1). Wyoming and Colorado are perfect rectangles, and a dozen other states are bounded by enough straight borders to resemble boxes. These near-rectangles are prevalent west of the Mississippi where, in the worlds of the folk song, 'the states are square' (2).

That might not have been so if the US government had heeded the suggestions of John Wesley Powell, who in 1890 produced this Map of the Arid Region of the United States, showing Drainage Districts. Powell argued for those districts to become the essential units of government, either as states or as watershed commonwealths.

Those borders might look pretty alien right now, and Powell's proposal far-fetched, but he was hardly operating from the lunatic fringe. John Wesley Powell [1834-1902] is a towering figure in the history of the exploration and management of the American West. As a restless young man of 22, Powell rowed down the Mississippi all the way from St. Anthony, Minnesota, to the sea. Despite losing an arm in the Civil War and gaining a  geology professorship afterward, he continued exploring, turning his attention to the American West.

One of his expeditions, in 1869, was the first documented passage of European Americans through the Grand Canyon. In 1881, Powell was appointed the second director of the US Geological Survey. He also directed the Bureau of Ethnology at the Smithsonian Institution. In recognition of his service to the nation, Powell was buried at Arlington (after his death, presumably), and a monument in his honour erected at the Grand Canyon. Both the USGS headquarters and one of the organisation's highest awards were named after him.

The explorer's name was also bestowed on the second-largest man-made reservoir in the US, on the Colorado River straddling Utah and Arizona. This is deeply ironic, since large-scale reservoirs like Lake Powell were exactly what he was arguing against in his Report on the Lands of the Arid Regions of the United States.

Powell was convinced that only a small fraction of the American West was suitable for agriculture (3). His Report proposed irrigation systems fed by a multitude of small dams (instead of the few huge ones in operation today) and state borders based on watershed areas. The bulk of the arid regions should be reserved for conservation and low-intensity grazing.

But other interests were at work; the railway companies lobbied for large-scale settlement and agricultural development. Counter-expertise for Powell's point of view was provided by professor Cyrus Thomas, who claimed that 'rain follows the plough'. That theory was thoroughly disproved by the Dust Bowl of the 1920s and 1930s, which caused tremendous hardship among the pioneers attracted to farm the arid regions, and led many of them to migrate even further West.

In light of that disaster, Powell's warning at an irrigation congress in 1883 seems particularly prescient: "Gentlemen, you are piling up a heritage of conflict and litigation over water rights, for there is not sufficient water to supply the land." Powell must have been frustrated by the contrast between the way his achievements were lauded, and his warnings ignored.

Had his water-based recommendations been followed, the states out West would have looked very different - the opposite of square. Powell foresaw that irrigation issues would be the principal bone of contention in the West. He therefore proposed that drainage districts, as shown on this map (4), should be the fundamental unit of government in the West.

If these districts did not themselves become states, then they should at least be organised as inter-state commonwealths, the authority of which over irrigation and agriculture would trump that of the states. What would this aquacratic system have implied? Powell's water-based states would have been contained by the eastern and western boundaries of the arid region itself. This would leave a much smaller area for the Pacific states. These would be reduced to a narrow coastal band, except for the North-West, where the non-arid region lurches inland, and southern California, which would be included in the arid region almost up to San Francisco.

For reasons unknown, Powell leaves unclaimed a strip of land on the inside of the eastern border of the arid zone. The drainage districts themselves are each shaded in lighter and darker hues, implying further administrative subdivisions. The shading makes a total count of the districts a bit tricky - I count 22 or 23. Some of the drainage districts are quite small, like the light brown one in the south of New Mexico, or the dark brown one surrounding the Salt Lake in Utah. Others are huge, like the orange one bordering the Salt Lake district to the south-west, which reaches across southern Nevada and southern California all the way down to the Mexican border.

Unfortunately, Powell neglected to provide names for his proposed states/commonwealths. It would have been fun to toy around with a batch of vaguely familiar and totally weird state names, like the ones proposed by Thomas Jefferson for the Northwest Territory (5). But like Jefferson's states, the units proposed by Powell seem, well, the wrong shape. From a purely cartophile point of view, they don't work as well as the states that did eventually make the cut. Ironically, they lack the normality of the present batch of straight-border states. Or is that just the force of habit talking?

Many thanks to Matthew Frank for bringing this map to my attention. He discusses it here on his blog Aqueous Advisors. Click here for a larger version. Powell's water-based borders bring to mind professor C. Etzel Pearcy's more recent proposal for 'natural' state borders (6).

(2) "Oh, I will go up and down the country and back and forth across the country. I will go out West where the states are square. I will go to Boise and Helena, Albuquerque and the two Dakotas and all the unknown places. Say brother, have you heard the roar of the fast express? Have you seen starlight on the rails?" (Utah Phillips [1935-2008], Starlight on the Rails. Phillips, a troubadour in the mould of Pete Seeger and Woody Guthrie, ran for US president in 1976 for the Do-Nothing Party).

(3) about 2%, mainly near natural water sources.

(4) presented together with his Report to the US House of Representatives Committee on Irrigation.