California’s water woes are severe and worsening. A second dry year in a row has diminished the state’s water supply, and almost three-quarters of the state is in “extreme” or “exceptional” drought, the two highest categories. With the rainy season over and a hot, dry summer ahead, water shortages and brushfires are imminent. 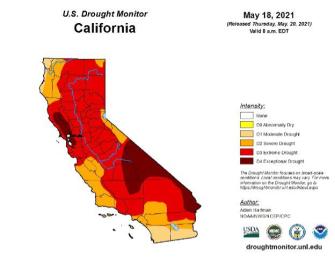 California is not alone. Other Western states are facing severe — and worsening — water shortages. As described by the EPA, stress on water supplies and the nation’s aging water treatment systems can lead to a variety of consequences for communities, including higher water prices, increased watering restrictions to manage shortages, seasonal loss of aquatic recreational areas when the human demand for water conflicts with environmental needs, and expensive water treatment projects when local demand overcomes available capacity.

There are both consumption and supply problems, and neither will be easy to fix. However, we have a remedy to suggest for the latter that dovetails nicely with congressional and White House initiatives to improve and expand the nation’s infrastructure.

A problem of supply and demand?

Americans use more water per capita than almost anyone else in the world — almost three times as much as the Chinese, double that of Japan, and 14 times more than the Danes. The highest domestic water use is in the driest Western U.S. states; Arizona residents use 147 gallons per day compared to just 51 gallons in Wisconsin. That will come as no surprise to anyone who has seen the heavily irrigated golf courses in places like Phoenix and Scottsdale.

America does not have a water supply problem; it has a water distribution problem.

The situation in California — with its outsized population, massive agriculture, and recurrent droughts over much of the past decade — is particularly tenuous: There is a severe deficit of groundwater. For years, farmers in the Central Valley have liberally extracted water from the region’s aquifers to compensate for reduced supplies from canals and aqueducts. As water levels have dropped, farmers, homeowners, and municipalities have dug deeper and deeper wells, but such measures only prolong the inevitable: The incidence of well failures is increasing.

Most proposed solutions, which have focused on conservation, have been unpalatable, while few have focused on ways to increase supply. And therein lies the rub: America does not have a water supply problem; it has a water distribution problem.

A pipeline for water 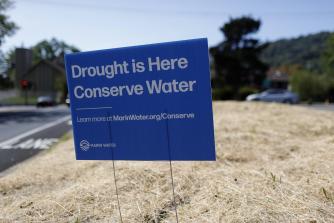 Therefore, to address the water shortages in Western states, we propose a major new infrastructure project that could revolutionize water distribution in the United States and further development of the western half of the nation: long-distance pipelines and aqueducts.

In much of the West, rain is sparse. Except for parts of the Pacific Northwest, water comes largely from a variety of non-precipitation sources. California, for example, has a hodge-podge of sources, one of the most important of which is the Colorado River, which supplies most of the water for farm irrigation and urban areas in the southern part of the state. Arizona, California, Nevada, New Mexico, Utah, Colorado, Wyoming, and Mexico all share the river’s resources. However, the river is increasingly threatened by drought, with flows having dropped some 20 percent over the last two decades.

The largest eastern river, the Mississippi, has about 30 times the average annual flow of the Colorado, and the Columbia has close to 10 times. Water from these and other large rivers pour unused into the sea. The Great Lakes are another possible source.

Thus, the West’s chronic water shortages result from a failure to appropriately redistribute our nation’s abundant total water resources. We currently transport oil, but not water, across America, although water can move through pipelines, tunnels, and aqueducts with perfect safety over long distances on a virtually limitless scale. 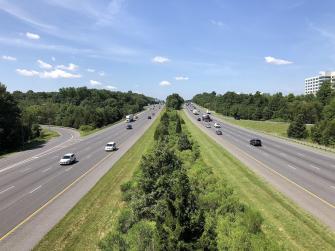 The Interstate Highway System Credit: Famartin via Wikipedia and licensed under CC BY-SA 4.0

We envision a major combined federal and private hallmark program for the nation — an Interstate Water System (IWS), which would rival in importance and transformative potential the Interstate Highway System, whose formation was championed by President Dwight Eisenhower. America already moves some water and stores it in man-made lakes, and the IWS would be designed to expand America’s water-related infrastructure by crossing state boundaries to transport water from where America has an abundance of it to where it is needed. With modifications and expansions over time, no part of America would find itself short of water.

The IWS is practicable. Assume that an initial goal might be doubling the water flow, averaging about 20,000 cubic feet per second, to Colorado River system reservoirs. Pumping Mississippi River water to an altitude of 4,000 to 5,000 feet likely would be needed to supply reservoirs Lake Mead (altitude 1,100 feet) and/or Lake Powell (altitude 3,600 feet). We estimate that it would require fewer than ten power plants of typical one-gigawatt size to provide the energy to move water halfway across the nation to double the flow of the Colorado River. (Gravity-driven flow turning turbines below its reservoir lakes would eventually regenerate much of the input energy required.)

The implications of an IWS would be enormous. It would create innumerable jobs, provide many construction and other business opportunities, and facilitate national growth and development, including greatly enhanced development of many lightly populated dry areas in the West and Southwest.

The IWS would evolve over years, as did the Interstate Highway System. We should start building it now.

Joseph D. Schulman, M.D., a scientist, former professor, and Chairman of Genetics & IVF Institute, lives in the American East and West. John P. Schaefer, Ph.D. is a chemist, former President of the University of Arizona, and Chairman of REhnu, Inc. Henry I. Miller is a physician, molecular biologist, and Senior Fellow at the Pacific Research Institute.

A forensics expert explains what’s involved with documenting human rights violations during conflicts, from Afghanistan to Ukraine.
The Present

It is wrong to think that these three statements contradict each other. We need to see that they are all true to see that a better world is possible.
The Present

As technology advances, the use of laser weapons in space becomes more likely.
Health

A food safety researcher explains another way to know what’s too old to eat.
Up Next
13.8

Dark matter and dark energy: the mysterious ingredients in our universe

Science is an ongoing flirtation with the unknown.