“Where did everything come from?” is perhaps the most fascinating question we can ask — so much so, that it’s much older than science itself, given that most religions have also wondered about our origins. That science joined in during the 20th century as a powerful new voice in this conversation is nothing short of extraordinary. How amazing is it that a mammalian species on a small planet could develop the intellectual and technological tools to say something concrete about the history of the universe itself? And how far can we go telling this story?

Dark matter and dark energy are vivid reminders that science is an ongoing flirtation with the unknown.

We know that the universe has a history that started some 13.8 billion years ago — hence, the name of our column, 13.8 — and that it has been expanding and cooling ever since. How do we know this? There are several ways: (1) Galaxies are receding from one another with speeds proportional to their distance, carried by the expansion of space itself; (2) A bath of microwave photons (i.e., the particles that make up light and all other forms of electromagnetic radiation) permeates the whole universe, serving as fossils from the time when the first hydrogen atoms formed, some 400,000 years after the Big Bang — as predicted by theory; and (3) Between a second and three minutes after the Big Bang, the first light atomic nuclei were formed by a process called “primordial nucleosynthesis” in quantities also predicted by theory and verified by observations.

The missing ingredients in the universe

All the above is solid science. But it’s not enough. We want to go further back in time to explain some of the finer details of the cosmic expansion, before and beyond the formation of light nuclei and the microwave background. So we add two more components to the cosmic recipe, both suggested by observational evidence but still shrouded in mystery: dark matter and dark energy.

If we think of the material composition of the universe as a cake recipe, we find ourselves currently in the odd situation of knowing that we have three main ingredients — regular matter, dark matter, and dark energy — and how much of each we need, but we don’t really know what the two most abundant are. We do know a lot about them, but certainly not enough. And that’s the agony and the (potential) ecstasy of scientific research, the power of speculation to open new ways of thinking about nature or sinking us into further confusion. 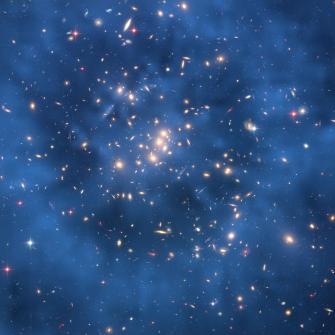 Dark matter was first speculated to exist in the 1930s by the Swiss-American astronomer Fritz Zwicky as he noticed that galaxies in clusters moved faster than they should if the matter in the cluster was only the matter that shined (and, hence, was visible to our telescopes). Things evolved faster after American astronomer Vera Rubin and her collaborators noticed in the late 1970s that stars in galaxies rotated faster than they should if the matter within them was, again, only the matter that shined. An intense search for dark matter — so-named because we can’t see it — has been ongoing for the past four decades or so, still with negative results. The puzzling thing is that we see its effects quite clearly as we look to objects in space. Having mass (and thus gravitational pull), it affects the stuff we can see. But efforts to collect particles of dark matter have been unsuccessful so far, a somewhat stressful tension between astronomical observations and fundamental theory.

Dark energy was discovered in 1998 and is even more mysterious and elusive. We know it’s not made of particles or smaller chunks of material stuff as dark matter probably is; it seems to be an ethereal substance that permeates the whole cosmos with the bizarre property of making space stretch out faster than expected. We can’t think of it as a localized thing but rather as a spread-out thing, like air in the atmosphere (sort of).

Efforts to collect particles of dark matter have been unsuccessful so far, a somewhat stressful tension between astronomical observations and fundamental theory.

Dark energy candidates are all quite weird. One candidate consists of quantum fluctuations of energy in empty space that materialize as particles that pop in and out of existence, the energy of the vacuum itself. Or it could be a mysterious property of space itself, something Einstein invented to save his 1917 failed model of a static universe, today called the “cosmological constant.” Most probably, if this is dark energy, it is only an approximation for something much more complex and subtle that only looks constant to us now. Or perhaps dark energy is some unknown kind of substance modeled as a diaphanous field that pervades all of space, affectionally called “quintessence” by cosmologists, echoing the substance Aristotle proposed to make up celestial objects and fill up the heavens.

Whatever they are, dark matter and dark energy have the potential to revolutionize our understanding of the universe. Like subtle tracks of a fox on a vast snowfield, we know they are out there in some form due to the way they impress their presence on what we can see in the world. If we didn’t know a fox existed, we would infer an animal made those tracks. We would then try to imagine what kind of animal it was that left tracks such as these using the evidence at hand.

Likewise, we see the tracks of dark matter and dark energy imprinted in the universe, and we are trying to determine what mysterious things they could be. Dark matter and dark energy are vivid reminders that science is an ongoing flirtation with the unknown. Even if our current speculations turn out to lead us in the wrong direction, we need to take risks to advance our understanding of the world.

From time-traveling billiard balls to information-destroying black holes, the world’s got plenty of puzzles that are hard to wrap your head around.
Surprising Science

How did the troughs form?
Up Next
Neuropsych

Studies likely to be wrong have 153 more citations

Science journals may be lowering their standards to publish studies with eye-grabbing — but probably incorrect — results.