The mean centre of US population is “the point at which an imaginary, flat, weightless and rigid map of the US would balance perfectly if weights of identical value were placed on it so that each weight represented the location of one person on the date of the census”, in the definition of the US Census Bureau itself.

That bureau has been holding censuses every decade since 1790; these censuses form the backdrop for this string of mean centres of population in the US. The map shows an ever westward shift of that centre, obviously in parallel with the westward expansion of the US and its citizenry. The mean centre of population of the US has shifted thusly: 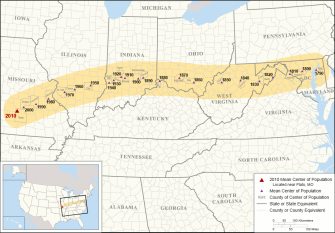 This list refers to the nearest city, which might be in a different state than the mean centre itself. For a more complete listing, including precise sets of decimal coordinates, please see this Wikipedia article.

Many thanks to Kees Huyser for alerting me to this map, illustrating the aforementioned Wikipedia article.

The science fiction dream of a traversable wormhole is no closer to reality, despite a quantum computer’s suggestive simulation.
Up Next
Strange Maps