In Feral, his book proposing a re-wilding of our natural environment, George Monbiot refers to Shifting Baseline Syndrome as a major cause in our misperception of what is ‘natural’.

As individuals, we lack a multi-generational perspective. Our environment is in its ‘natural’ state when we are young, or so we assume. The only environmental destruction we really notice is what occurs within our own lifetimes.

Humanity’s baseline for what is natural keeps shifting with every new generation, clouding our view on longer processes of environmental damage and degradation.

Shifting Baseline Syndrome can have perverse effects on our attempts at nature conservation – sometimes, we conserve the environmental destruction, rather than restoring the environment to its previous natural state.

Monbiot has a particular bone to pick with the sheep that are used to maintain large tracts of Britain in a near-desert condition. Those sheep are an invasive species, he argues, and the medieval switch to a wool-based economy destroyed the richly biodiverse forests that covered most of the island.

America too is subject to the paradox of ecological degradation: its scope is so massive that it’s hard for us as individuals to notice. These maps suggest some interesting markers to get a sense of the discrepancy between our ‘natural environment’, and that of previous generations.

They compare the geographic spread of cities and towns (1) in America named after native animals and the current geographic distribution of those species. As you may have expected, most indicate a huge reduction in the range of said animals.

Let’s start with bears: as the map indicates, they roam far and wide: from the Appalachians all the way into Maine, on the coasts of Virginia, in Florida, along the Mississippi in Louisiana, in Arkansas and Missouri, throughout the west and the Pacific states. Most ‘bear’ towns align more or less with the animal’s current range:

But some indicate that the majestic predator once had an even wider distribution:

It’s worse for wolves: they’re limited to two relatively small areas near the Canadian border, far away from most ‘wolf’ towns:

Judging by the places named after the animal, elk used to be prevalent across most of the country. ‘Elk’ towns are concentrated in the Midwest:

Some elk towns are further east:

The current range is limited mainly to the Rockies and the Pacific Northwest, with small scattered patches elsewhere. Some elk towns actually in elk country:

Badgers are holding firm in most of the country, absent only from the eastern third of the country (and a small part of the northwest). There are still badgers in all badger towns on this map:

Beavers are everywhere, except in California, Nevada and Florida. And so are beaver towns, with concentrations in Pennsylvania, Ohio, Nevada and Oregon.

Poor wolverines: clinging on to a dwindling strip of land in the northwest, with small colonies remaining in California and on the Nevada-Utah border. Where are the times when they roamed Michigan in such numbers that two towns in that state – Wolverine Lake, near Detroit, and Wolverine, near the top of the state’s Lower Peninsula – were named after them?

Map found here at Data is Beautiful on Reddit. 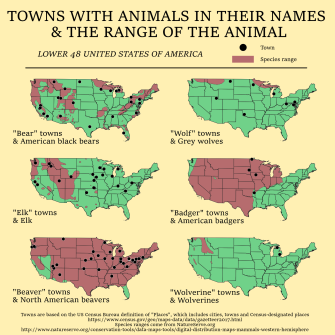 (1) The dots represent populated places, i.e. cities, towns or census-designated places as defined by the U.S. Census Bureau. The maps do not include other topographical features named after said animals (e.g. Wolverine, an unincorporated community in Kentucky, Wolverine Canyon in Utah, Wolverine Creek in Kansas, or Wolverine Hill and the Wolverine Mine, both in Michigan). Species ranges come from natureserve.org.

(2) Big Bear City is the location of a quartz dome that is worshipped as the Eye of God by the Serrano, a tribe native to the area.

(3) One township in Kalkaska County, the other in Manistee County.

(4) A city in the Fort Peck Indian Reservation and the home of the annual Wild Horse Stampede, “the Grandaddy of Montana Rodeos”.

(5) Named after a Kiowa chief rather than the animal.

(6) But not Elkader, named after Abdelkader ibn Muhieddine, a 19th-century Algerian fighter against French colonialism.

(7) Despite being surrounded by a largely industrial area and its proximity to O’Hare International Airport, Elk Grove Village is home to a small herd of elk – indeed kept in a grove. The herd was brought to the area in the 1920s and is maintained by the Chicago Zoological Society. Unrelatedly, Elk Grove Village also is the hometown of Billy Corgan and James Iha, both of the band Smashing Pumpkins.

(8) By the early 19th century, elk had disappeared from the area. The National Park Service has now reintroduced small numbers of elk to western North Carolina.

(9) The setting of Elk Mountain, a graphic novel about the relationship between superheroes and the communities they defend.

(10) That’s not counting the names of half a dozen other places in Pennsylvania, including Big Beaver and New Beaver.

A new study used massive amounts of data from an online dating service to explore what makes someone desirable, and how people go about attracting partners online.