“While on vacation in Dubrovnik, Croatia this summer, we ran across an old Yugoslav atlas which included this map on the entry for the US. My Serbo-Croatian isn’t so good so I don’t know the true details as to what it’s about, but it appears to be plans for a Russian invasion,” says Andrew, who sent in this map.

“Submarines labelled SSSR are on both coasts. The apparent flight paths of ICBMs are marked. Cuba’s soldiers and bases are indicated (…) If you can figure out more precisely what’s going on I’d certainly be curious, and I imagine that other readers would get a kick out of it.”

My Serbo-Croatian isn’t very good either, but the map does seem to speak the language of the Cold War. Guessing the exact year is complicated as national borders in the Americas have remained stable in the last few decades, unlike in other parts of the world, where they allow easier carto-dating.

A look at the actual legend of the map does allow for some closer dating. Item #3 (the red vertical stripes) indicates the pro-soviet regimes in the hemisphere – Cuba and Nicaragua. The inclusion of that second country limits the timeframe of the map to 1979-1990, the era when the Sandinistas were in control of Nicaragua. 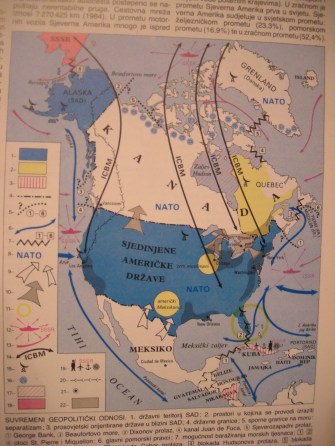 Although the Soviet navy has got the North American continent completely surrounded, in my opinion, the map does not demonstrate a Soviet plan of attack, but restates the Communist ideological orthodoxy of the US as an aggressive, unstable monstrosity at near-collapse – a remarkable example of the pot calling the kettle black.

• Whereas blue indicates the US itself (Sjedinjene Americke Drzave, acronym SAD – but that is a coincidence, I presume), yellow indicates ‘separatist’ forces at work in the North American continent, such as Quebec (although that is a Canadian, not a US issue) and Black Muslims (around Chicago) and Mexican-Americans (in Texas). Again, a pretty remarkable comment, coming from a Yugoslav atlas. • Item #5 on the legend indicates, I think, ‘disputed’ marine boundaries, mainly between Canada and the US, thus misrepresenting the mainly friendly relations between those two countries – the disputes might be real, but their significance is relatively minor.

Anyone able to elucidate on the meaning of the other symbols? Please do!