Off the top of your head, how many songs do you know that mention US states, either in their title or in the lyrics? Here’s how far I got:

This totally unscientific sample seems to confirm what this hopefully better-researched map visualises – even though it deals only with states mentioned in country lyrics: that Southern states are sung about much, much more often than Northern ones.

Many thanks to Allen Garvin for discovering and sending in this gem. “I love this map because Texas rightfully takes its place as the largest state in the Union”, writes Mr Garvin. True, but I think that Tennessee has gained more in size than Texas has, relatively speaking. 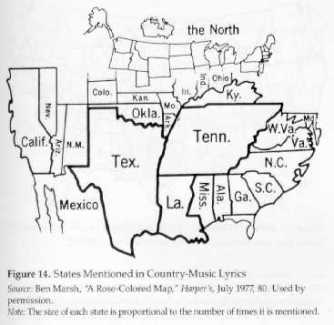 Very few people are neutral about country music – it’s either loved or loathed. It can also be seen in a post-emotional way, as an expression of genuine Americana, living folklore, it’s been used as a yardstick in a variety of scientifical studies.

Mr Garvin has held on to this remarkable map for some years, and unfortunately can’t provide a link to its original context, so it’s difficult to judge the map’s scope and seriousness. The map did remind me of another, more notorious piece of universitary research a few years ago, which did seem to demonstrate a correlation of country music with suicide:

“Country music is hypothesized to nurture a suicidal mood through its concerns with problems common in the suicidal population, such as marital discord, alcohol abuse, and alienation from work. The results of a multiple regression analysis of 49 metropolitan areas show that the greater the airtime devoted to country music, the greater the white suicide rate. The effect is independent of divorce, southernness, poverty, and gun availability”.

A tear in my beer, indeed.

Buddhism has rules for slaying your enemies. But the real surprise is finding out who your enemies actually are.
Up Next
Strange Maps

Hey, who put mustard on my map?