“Tell me what you eat”, the famous quote by legendary chef Brillat-Savarin goes, “and I’ll tell you who you are.” The dictum also applies very locally, to South Carolina, and very specifically, to barbecue sauce.

”We barbecue enthusiasts find it fascinating,” says John Shelton Reed about the peculiar example of culinary cartography he sent in, which was taken from ‘South Carolina: A Geography’ by Charles F. Kovacik and John J. Winberry (if you don’t at least have a middle initial, you’re not really Southern). 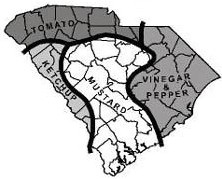 The map shows the state of South Carolina divided into four regions, according to the preferred style of condiment used on barbecued food.

This peculiarity can be explained by “the German names of the principal purveyors of mustard-based sauces (…) it does seem that most are descended from the great 18th century wave of German immigrants to the Southern uplands.”

Thanks for that fascinating bit of gastronomy-meets-genealogy-meets-cartography, Mr Reed. I’m feeling a bit peckish now…

A final word on that most appetite-inducing word, the barbecue – its etymology is not, as I always thought, French (from the roasting of wild boars snout to tail, or in French barbe à queue) but apparently it’s an americanism, in fact a real Southern word, derived from the New World-Spanish expression barbacoa, itself taken from the Arawak language, where barbakoa means something like ‘wooden support beam’.

Actor and science communicator Alan Alda shares his three rules of three for effective and empathic communication.
Up Next
Strange Maps