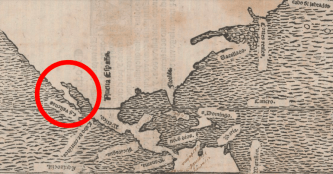 Detail of an early woodcut world map by Francisco Lopez de Gomara (Zaragoza, 1553). The oldest map in the McLaughlin Collection, it shows California nameless for now, but with its correct, peninsular shape.

In 1971, Glen McLaughlin came across a strange map in a London map shop. Americæ Nova Descriptio, produced by Anne Seile (1) in 1663, showed California as a big, carrot-shaped island, floating off the coast of North America.

McLaughlin, a venture capitalist in Silicon Valley, bought the map and hung it on a wall at home. It turned into a popular talking point with visitors, and California-as-an-island became McLaughlin’s decades-long obsession.

Over the next 40 years, he collected more than 700 maps, charts and other cartographic objects on the topic, building up a visual library of what is one of history’s most persistent cartographic fallacies. 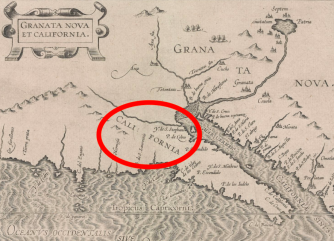 Detail of ‘Granata Nova et California’, a map by Corneille Wytfliet, published in Leuven in 1597. It’s the oldest map in the collection to label the west coast of North America as ‘California’. Again the region is shown, correctly, as a peninsula.

Perhaps that persistence and McLaughlin’s obsession spring from the same source. Even though California geographically isn’t an island, it does tend to feel like a place separate from the ‘mainland’.

Indeed, in more ways than one, California is a one-off. Some metrics are obvious. It’s so vast and varied that it could easily be a country on its own, let alone an island. California is the largest state by population (40 million) and GDP ($3 trillion, 15% of the U.S. total). It’s home to both the highest and lowest points in the contiguous United States: Mt Whitney (14,505 ft; 4,421 m) and Badwater Basin in Death Valley (-282 ft, -86 m).

But the Golden State is special in a more intangible way as well. It’s where America’s westward expansion met its ultimate physical barrier: Manifest Destiny, say hi to Pacific Ocean. Both the 1849 Gold Rush and the birth of Hollywood, half a century later, merely confirmed the image of California in the popular mind as the final destination of the American Dream – there to flourish or wilt. 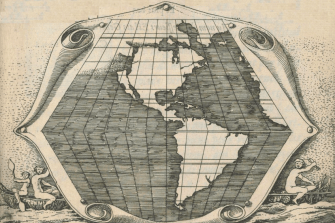 Detail of the second title page of ‘Descriptio Indiæ Occidentalis’ by Antonio de Herrera y Tordesillas, published in Amsterdam in 1622. This is the earliest map to show California as an island.

It’s fitting that a state so synonymous with storytelling should have started out as an invention itself. California is the only state that was named after a fictional place. Bound up with its name was the misconception that California was an island – and so it would remain on many maps, until as late as 1865.

In 1533, a mutineer from Hernan Cortez’ expedition into Mexico landed on a peninsula so elongated that he mistook it for an island. He named it after a fictional island in Las Sergas de Esplandian (‘The Deeds of Esplandian’), a romantic novel then popular in Spain. It says that:

“[O]n the right hand of the Indies there is an island called California very close to the side of the Terrestrial Paradise; and it is peopled by black women, without any man among them, for they live in the manner of the Amazons.”

The women were gorgeous, brave and strong, and their weapons were all made of gold – the only metal available on the island. 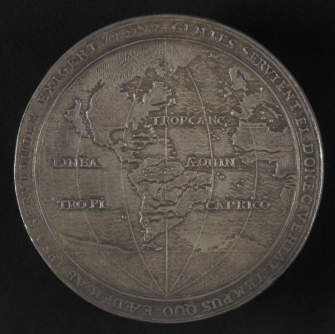 Silver coin struck by Laurens van Teylingden to commemorate the capture of the Spanish silver fleet by Dutch admiral Piet Heyn, in 1628 off Matanzas Bay in Cuba. It’s the only known representation of California Island on a medal.

Though the name ‘California’ can be traced to a specific novel, its etymology remains disputed. In the novel, the island is ruled by Queen Calafia. Her job title suggests a derivation from the Arabic ‘caliph’ (‘ruler’) – ‘California’ would thus mean something like ‘Caliphate’.

Another theory pinpoints the name’s origin to ‘Califerne’, a place mentioned in verse CCIX of the medieval Song of Roland (and also deriving from ‘caliph’), while a third one posits a derivation from ‘Kar-i-Farn’, Persian for ‘Mountain of Paradise’. One more: ‘calit fornay’, Old Spanish meaning ‘hot furnace’.

As early as 1539, an expedition by Francisco de Ulloa demonstrated that the area (near the southern tip of present-day Baja California, Mexico) was a peninsula after all. But fiction proved stronger than fact. Even though the earliest maps do show California attached to the mainland, the name for the place stuck. 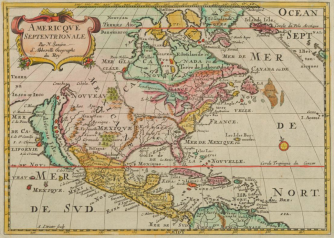 Detail of ‘Americque Septentrionale’ by Nicolas Sanson (Utrecht, ca. 1682). Classic representation of California as an island, with some extra fantasy islands added to the narrows separating it from the mainland.

But the idea of the island of California proved pretty tenacious too. After an 80-year period of continental attachment, California started to appear on maps as an island, from 1622 onward and far into the 18th century.

California’s insular revival is generally ascribed to Antonio de la Ascension, a Spanish clergyman who had sailed along North America’s West Coast in the early 1600s and yet, contrary to the evidence, claimed California was an island.

Perhaps this was to invalidate the English claim on the continent. In 1579, Sir Francis Drake had landed at a place he called ‘Nova Albion’ (today known to be Point Reyes, California), and claimed the region for England. If Drake’s landing could be situated on an island, De la Ascension seems to have thought, Spain’s claim to the mainland itself would remain undisputed. 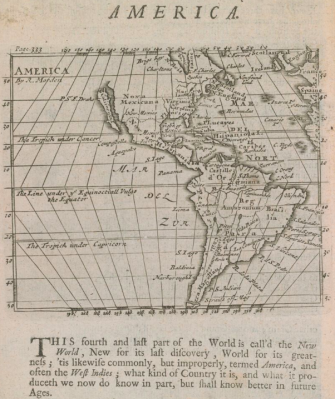 Introduction to the chapter on America in Robert Morden’s ‘Geography Rectified’ (London, 1700). Fighting a losing battle on the naming of the New World (“commonly, but improperly, termed America”), but cool with the name California, and with its insularity.

That it would take more than a century to set the record straight again speaks to California’s by now semi-legendary status. Other famous cartographic legends on the map of the Americas include Norumbega, El Dorado and Siete Ciudades.

Father Eusebio Kino’s expedition (1698-1701) proved – again – that California was connected to the North American mainland. The title of his report left no doubt: ‘A passage by land to California’. Still, not everyone was prepared to give up the ghost of California Island.

However, by 1747, king Ferdinand VI of Spain had had enough. Tiring of the persistent falsehood infesting his maps, he simply decreed that “California is not an island”. Only after this was reconfirmed by the expeditions of Juan Bautista de Anza (1774-1776) was the fiction definitively laid to rest. 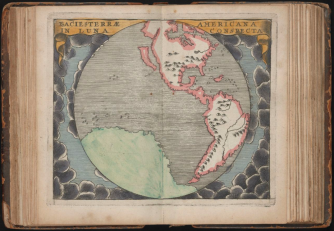 ‘Facies terrae americana in luna conspecta’ (‘The American face of the Earth, from a lunar perspective’): map by John Seller, part of his ‘Atlas Coelestis’ (London, ca. 1700). The island of California is the smaller mistake on this map – there’s also a giant southern continent almost touching the southern tip of South America.

But it’s hard to kill a ghost, and cartographic spectres are particularly persistent. Even as the rest of the world caught up with the facts on the ground, a Japanese map in 1865 showed California – by then thoroughly explored, well described and increasingly populated – as an island nevertheless, the last such occurrence in cartographic history.

Glen McLaughlin’s collection is testament to the mesmerising power of map mistakes, over other cartographers and over collectors like himself. In 2011, and by then in his 80s, he had had enough, though: he parted with his collection, which was acquired in its entirety by Stanford University. It’s now online in its entirety, featuring these maps and many others. 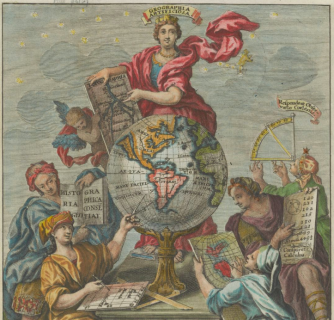 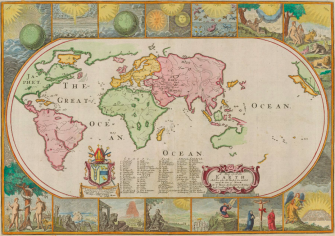 ‘A Map of all the EARTH and how after the Flood it Was Divided among the Sons of Noah’. (Joseph Moxon, London, 1711). California is on the extreme right of the map, almost falling off (a fate that often befalls New Zealand these days). North America is green, and labelled ‘Japhet’. California is yellow, but it’s unclear whether this indicates it belongs to another son of Noah’s (or which one). 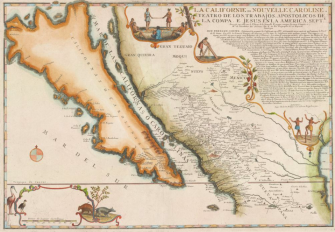 ‘La Californie ou Nouvelle Caroline’: map by Nicolas de Fer (Paris, 1720) showing California in the shape and colour of a giant carrot, floating off the coast of North America, and proposing an alternate name for the island: ‘New Carolina’. The text relates to the missionary work of the Jesuits in the area. 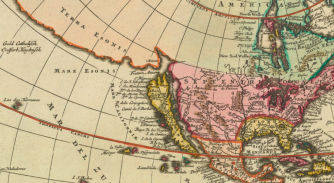 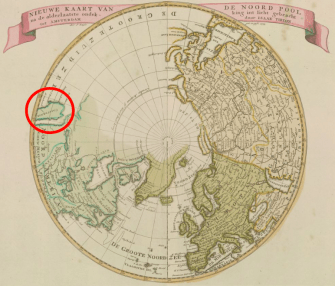 Hemispherical map centred on the North Pole, created by Isaak Tirion in Amsterdam in 1735, showing the northern tip of the island of California (circled). 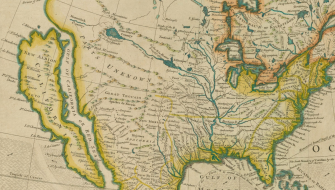 Detail of a map by Richard William Seale, created in London in 1745. While the East Coast is shaping up with names and borders still recognisable today, the West Coast is still dominated by that huge, floating island – rendered in great detail for added believability.

East is east and west is west 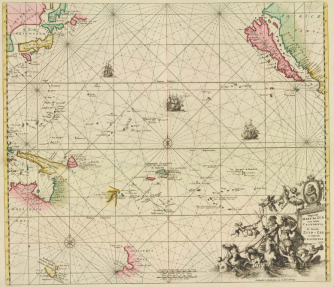 ‘De Groote Zuyd-Zee en ‘t Eylandt California’, created by R. and J. Ottens and printed in Amsterdam in 1745. The map shows California as a Pacific island, larger than Japan and much more defined than Australia or New Zealand, traced only in partial outlines and labelled Hollandia Nova and Zeelandia Nova.

California as a Pacific island 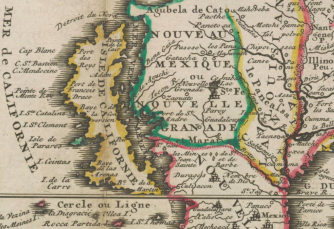 Detail of ‘L’Amérique Septentrionale’, created by Jacques Chiquet in 1721 and published in Amsterdam around 1749. It shows a huge and well-defined island of California, its southern tip touching the Tropic of Cancer, facing New Mexico and New Spain across the narrow Vermillion Sea. 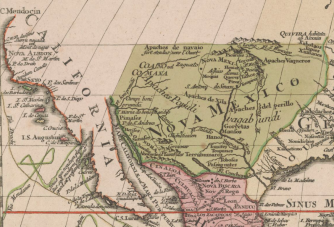 Detail of a map published in 1772 by Augsburg cartographer Tobias Lotter, based on earlier work by Guillaume de l’Isle. Rather than choosing between a peninsular or an insular version California, it hedges its bets by blanking out the northern part of the narrow ‘Californian Sea’. 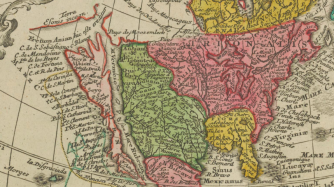 Detail of ‘Novae Orbis sive Americe Septentrionalis’, a map by Matthaeus Seutter (Augsburg, ca. 1790). It shows a particularly stretchy version of the Californian island, with numerous coastal place names (capes, islands) and both Drake’s Nova Albion and San Diego on the island itself. 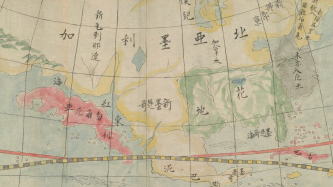 The last representation of California as an island (in red): detail of a map published in 1865 by Shuzo Sato in Japan.

(1) Continuing her husband Henry’s mapmaking business after his death in 1662, Anne Seile is one of the first female mapmakers we know of.

Once numbering just 27 birds, the global population of California condors is now in the hundreds.
Up Next
Hard Science

The Big Bounce: Why our universe might be eternal

When it comes to theories of the universe, the Big Bang theory is almost accepted as a fact. However, it’s still uncertain, and some scientists believe that the universe didn’t began with a bang, but a bounce.