No one seems to regret that Thomas Jefferson’s plan for the division of the Northwest Territory into ten new states was shelved. The proposed names were just too silly, writes 19th-century Jefferson-biographer John T. Morse, Jr.:

“The names suggested for these ten States are a peculiar mixture of Latin and Indian, and while a semblance of some of the names still remains in two cases, in all others it is so absolutely forgotten that the very fact has ceased to be known by many close students of American history. Yet, besides this humane and noble piece of statesmanship (the proposed prohibition of slavery in the territory) we have a glimpse of that absurd element in Jefferson’s mind which his admirers sought to excuse by calling him a ‘philosopher’. The matter is small, to be sure, but suggestive. He proposed as names for the several subdivisions of this territory: Sylvania, Michigania, Cheronesus, Assenisippis, Metropotamia, Illinoia, Saratoga, Washington, Polypotamia, and Pelipsia.” 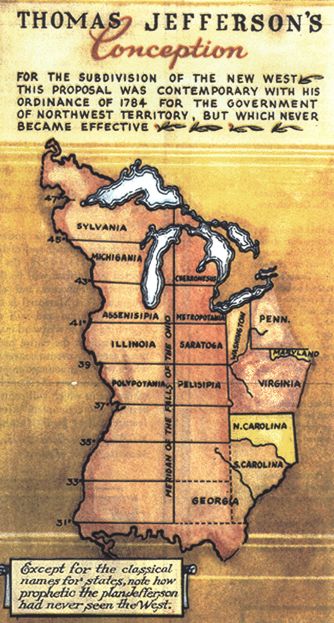 In 1787, the fledgling new republic for the first time expanded beyond the borders of the original 13 states. The area between the Great Lakes and the Mississippi and Ohio Rivers was annexed via the Northwest Ordinance, which also resolved long-simmering rivalries between the original states, most of which had claims to territories out west, by creating new states rather than expanding existing ones.

All of which might not have come to pass if the committee, chaired by Thomas Jefferson in 1784, had gotten its way. This committee proposed to divide the Northwest Territory into 10 states of roughly equal size, and even had names ready for them. Names with an antique ring to them, possibly to lend a bit of credibility to the then still precarious business of westward expansion.

•Sylvania would have covered much of present-day Minnesota, Michigan’s Upper Peninsula and some of northern Wisconsin. •Michigania would have incorporated most of Wisconsin, but nothing of Michigan. •Most of Michigan’s Lower Peninsula would have been the state of Chersonesus, which is simply the Greek word for ‘peninsula’. •The northern part of modern-day Illinois would have been the state of Assenispia, after the Assenisipi River, also known as the Rock River. •In between Assenispia and Pennsylvania would be the state of Metropotamia, a name referring to the many rivers originating there. •The states of Illinoia, Saratoga and Washington would have incorporated large parts of Illinois, Indiana and Ohio respectively. •Polypotamia (‘Land of Many Rivers’) and Pelisipia would have covered the western and eastern parts of Kentucky, mainly (and therefore are partially outside the Northwest Territory, as it is bounded to the south by the Ohio River, Kentucky’s northern border).

There is some disagreement as to the spelling of some of the states (Chersonesus is sometimes spelled Cherronesus or Cheronesus, Assenispia is sometimes rendered as Assenisippis or Assenisippia) and even on the number of proposed states, with some saying Jefferson had 17 new states in mind (although only 10 are named in his proposal).

Adding to the confusion is the unclear status of the territory south of the Northwest Territory (nowadays the states of Kentucky, Tennessee, Alabama and Mississippi), contested between the Spanish, the US and several states with individual claims. 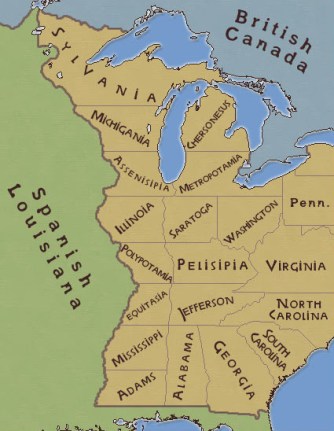 Jordan Penny, who was kind enough to make and provide this map of the ‘Jeffersonian’ Midwest, populates the area south of Kentucky with the states of Equitasia (western Tennessee) and Jefferson (eastern Tennessee), and has three states where there now are two: a more narrow Alabama, a state of Adams in the southern part of Mississippi, which in this version covers only its northern part.

Hey, who put mustard on my map?