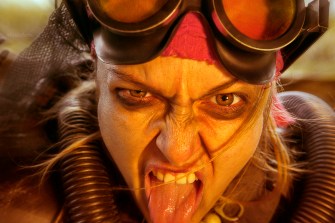 Is it really such a big leap from New Normal to Mad Max?

A peek behind the curtain

What comes after the United States? If you enjoy post-apocalyptic fiction, you know the answer: successor countries with exotic names, weird flags, and strange customs.

It looks like the current pandemic is providing us with a peek behind the curtain of the post-apocalypse, with individual states banding together to respond to the ongoing crisis.

On April 13, the governors of California, Oregon, and Washington announced that they would be coordinating their response to the coronavirus, in particular with regard to protecting senior citizens and other vulnerable groups, procuring protective gear for hospital staff, minimizing the impact of the emergency on living standards and healthcare provision, and rolling back the lockdown if and when appropriate.

On April 27, Nevada and Colorado joined this ‘Western State Pact’. Short of joining the pact, Hawaii has announced that it will be coordinating with the group.

Furthermore, Washington state will be coordinating with its Canadian neighbor, the province of British Columbia, about border reopening; and the state has also indicated that Idaho may be invited to join the pact. 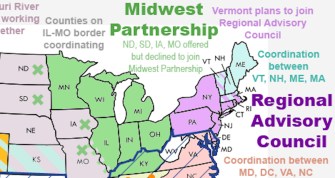 Also on April 13, on the other side of the country, New York and other northeastern states inaugurated the Regional Advisory Council. With an appellation this ominously abstract, it is our favorite candidate for post-apocalyptic prominence.

RAC member Massachusetts is shown in two colors, as it is also coordinating its efforts with three other northeastern states: Vermont, New Hampshire, and Maine. Vermont is striped in the same two colors, because it is thinking about joining the RAC.

Unless Maine and Vermont come up with a zippy name for their club, they’re going to be swallowed up wholesale by the group headed by President – sorry, Governor – Cuomo.

Because yes, names are important. Take ‘Midwest Partnership’, for instance: it exudes the level-headed pragmatism for which the region likes to be known. But not everybody’s equally pragmatic, it appears: while Minnesota, Wisconsin, Michigan, Illinois, Indiana, Ohio, and Kentucky banded together under the Midwestern banner, four other states were offered a seat at the table but declined, i.e. North and South Dakota, Iowa, and Missouri.

Those four states, plus Nebraska, Kansas, and Arkansas, are working together as the Missouri River States. That doesn’t seem like the most solid bloc of the bunch, though. A lot of members are hedging their bets. North Dakota is in a mutual-aid pact with Montana, while Kansas is also coordinating with Colorado, Utah, Wyoming, and New Mexico. On a lower level, Missouri counties along the Mississippi are working with their counterparts on the other bank of the river, in Illinois. 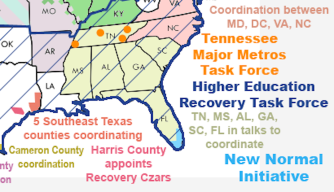 Last one wins or last one loses?

And Arkansas is one of the 16 states participating in the Higher Education Recovery Task Force. Set up by the Southern Regional Education Board, the HERTF brings together higher education leaders from its member states to address the challenges facing colleges, universities, and students during the COVID-19 pandemic and recovery.

Out west the situation is complicated by the considerable overlap between the aforementioned coordination effort uniting Wyoming, Kansas, Colorado, Utah, and New Mexico, and another coordination effort that brings together the latter two states, plus Arizona and the Navajo Nation, but not the other states. Why not just merge both and call it Four Corners Plus?

Back east, filling up the rest of the seaboard are two nameless collectives, one bringing together Maryland, D.C., Virginia, and North Carolina; the other prospectively roping in South Carolina, Georgia, Florida, Alabama, Mississippi, and Tennessee.

A few states are still unsure whether they’re playing a last-one-wins or a last-one-loses game. Apart from Idaho, five other states – Alaska, West Virginia, Oklahoma, Louisiana, and Texas – are still completely without any association. The latter three seem a logical fit for a club of their own. 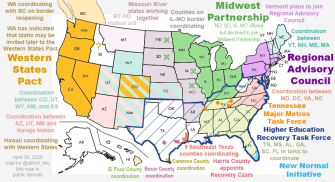 A map of the Untied States of America.

Several lower-level governments aren’t waiting for the states – or the federal government, for that matter – and have started their own thing: a number of counties in Texas, as well as Tennessee’s major metro areas, and four counties in southern Florida.

The latter will coordinate the phased re-opening of outdoor spaces, retail, and hotels, under the label ‘New Normal Initiative’. Another top-notch post-apocalyptic name. It’s not that hard to imagine them battling the Regional Advisory Council for the last of the country’s dwindling strategic Twinkie reserve.

A caveat: this map is a few days old, and the situation it describes may have changed in the mean time. And another one: of course, states banding together to respond to a national emergency is not one of the warning signs of the apocalypse. It’s an indication that something obvious is lacking: a coordinated federal response.

Or, as Andy Borowitz noted sardonically in The New Yorker: “In order to better coördinate their efforts to combat the coronavirus, the nation’s governors are considering the extraordinary step of forming a country.”

Map produced by Alfred Twa, reproduced with kind permission.Check out his twitter here.

Unreasonable burdens prevent people from thriving. Eliminate them.
Up Next
Starts With A Bang

Showcased in both visible (L) and infrared (R) light, the Pillars of Creation, made famous by Hubble, offer dramatically different views of the same object. Viewing the same things in […]