At 8.511.965 km², Brazil is the 5th largest country on earth, the larger ones being Russia, Canada, the US and China (in that order). The country conjures up mostly images of leasurely beach life, or crime-ridden slums. However, Brazil is slowly emerging as an industrial giant and might soon have an economic punch matching its surface (almost half of South America) and population (exceeding 188 million).

Although Brazil covers an area equal to 88% of the US and therefore is almost as large, its vastness holds less sway over the imagination of non-Americans. An interesting way of visualising its size is presented with this map: all of non-Russian Europe fits into Brazil… 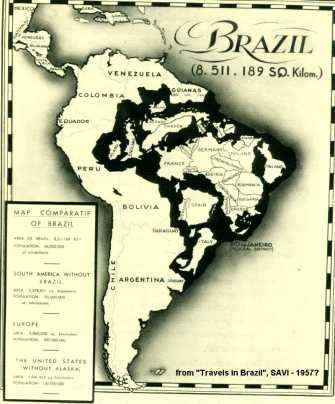