Cornwall is the southwesternmost county of England. As with other ‘extremities’ of the British Isles, it was one of the refuges of the original (partially romanized) Celtic inhabitants, fleeing before the invading Anglo-Saxons. Actually, when it was independent (during a period in the early Middle Ages known as the Heptarchy, when England was divided into 7 kingdoms), the Kingdom of Cornwall was also known as West Wales.

The people of Cornwall had their own Celtic language, closely related to Welsh and Breton, called Kernewek. This language has gradually died out, but has recently been revived; at present, there are approximately 3.500 speakers of Cornish, 300-400 of whom speak it fluently. A few people under the age of 30 have been brought up speaking Cornish. They are all bilingual in English.

This map shows the gradual retreat of Cornish – quite literally so: the progression of English, from 1300 til 1750, eventually pushes Cornish into the sea. 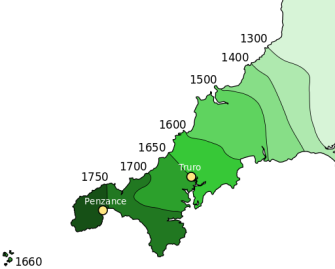