The Americans are sinking into a quagmire of their own making in Iraq, but still fantasise about re-drawing the map of the whole Middle East more to their liking. One startling example is this map, produced by the Armed Forces Journal, who in their June issue portray a region that is further balkanized, and basically split up along ethnic lines, thus creating a maximalist Kurdistan (which probably would be quite US-friendly, just like the Kurdish areas in northern Iraq at present), a greater Yemen, an Iran that would move eastward (acquiring certain areas of Afghanistan while losing a part of its west to Azerbeijan and an Arab shia state), and so forth.

Not having read the article accompanying the map, I’m guessing this is not so much a proposal as an exercise in thinking out loud. Such a re-drawing would have the whole region – not to mention all Muslim countries – up in arms, possibly quite literally. But it remains an interesting avenue of thought, especially for the disenfranchised peoples who would benefit from such a rearrangement. 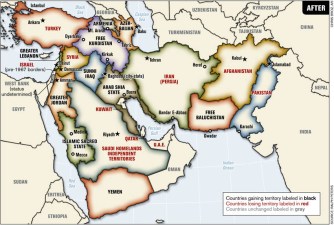 The great hope is that beyond the indirect, astrophysical evidence we have today, we’ll someday detect it directly. But what if we can’t?
Up Next
Guest Thinkers