Dan Pontefract is Chief Envisioner at TELUS, where he heads the Transformation Office, a future-of-work consulting group that helps organizations enhance their corporate cultures and collaboration practices. Dan is an[…]
Go to Profile 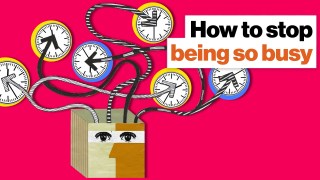 Being busy all the time is a habit you made. You can unmake it.

There will never be enough time. Here's how to use it more wisely.
▸
5 min
—
with
Dan Pontefract

DAN PONTEFRACT: The current approach today is essentially we've entered into a culture of freneticism—that's a Big Think word, and that means we're really busy. But I believe we've created the business on ourselves. Ultimately we've become distracted by— squirrel!—the next thing that pops into our head or the next thing that pops onto our device or the next thing that pops into our laptop; we're addressing it. And for some reason, we think it's a good idea to attend to every notification, every want of an employee, every need of a boss. And so we are loading ourselves up with more to do. We are ultimately working on the next thing while we're doing the current thing at the same time. We think that multitasking is a badge of honor.

We think that "do more with less" is the corporate mantra that's going to take us to gold medal plates. And it's frightening. And what we need to do is to take a step back and say, "How did we get here, is it good, and what's in store for the future?"

Right now, I mean ultimately, our team members, our bosses, our leaders are walking around like zombies, and it's not good. We go from one meeting to another. We're in a peripatetic state. We're just ultimately going from the 8:00 to the 9:00 to the 10:00 to the 11:00. We used to go out for lunch and pause, but now we go get lunch, we bring it to our desk and we stare at another device trying to catch up with everything we haven't done between 8:00 and 12:00, and then we go to the next meeting at 1:00, and we end up at 5:00. And then maybe we pick up the kids or we've got to go to soccer practice. And instead of looking at the soccer practice and the kids at that soccer practice we're looking at our device, because there's eight more texts and 15 more emails that have come in. And now it's 7:00 and you've got to make dinner. And at 7:00 and it's dinner you're like, "Well, I don't actually know how to make dinner anymore," so you order. And then while you're ordering you're attending to all your social streams.You're saying, "Oh! Well, I forgot how much I like dopamine, so I like those red things on my phone and my laptop that say, 'Hey, I've got eight likes on Instagram and 24 likes on Facebook'. Maybe I'll post more."

And then all of a sudden 16 more emails come in and you've got 14 more tasks to do because now you're at 9:00. "Well, I don't know, maybe I should just watch something." And so you binge watch Netflix for the fifteenth time and then it's 12:00 and you do the same thing over again.

So, for some reason, we think this is a good thing. We think that being constantly busy without having the pause, the meandering of thought, the marination in the moment; we think that we've just got to be constantly on and that's a good thing. But it's not. What we're doing is creating balls of cortisol. That means that we've got cortisol emitting from every orifice in our body.

We see that the APA is telling us that our levels of stress have increased since 1980 to a point where one-third of us are suffering from chronic stress in the workplace. We see other studies that suggest that half of us bring that state of stress home creating personal stress in our personal lives. So how is this good, when we're walking around with balls of cortisol emitting from every orifice? I don't see where this ends well for us in society.

One of the things that we ought to be thinking about—like I suppose any good book does—is think of things in a two-by-two matrix. That simplifies everything in our lives and so if we do that then we're fine, really. But in my case, I'm suggesting that there's a y- and an x-axis and we're only on the x-axis. The x-axis is action. So we seem to be stuck in the bottom right-hand quadrant, if you're kind of following a two-by-two matrix. So we're down here. And that's where action is. And we just sort of live in that state. There's more than 50 percent of us that are ultimately just "doing" all the time. We're addicted to the doing. But the word I think I want to reintroduce to society is reflection. When we reflect, so back here on the y-axis, when we reflect, we are ultimately commandeering our time. What we're doing is we're looking at our calendar and saying, "Is there any white space?" What we're doing is we're saying "Okay, when we take that elevator ride up to the 43rd floor in a hotel in New York in Manhattan, am I not looking at a device and am I possibly actually saying "Hello" to someone in an elevator? Reflecting, right?

To me, reflecting is also about networking and meeting people. Going for a walk without looking at your device, reflecting on what it is that maybe allows you to be who you are, who you want to be—what's your purpose?

Where we really need to get to is up here on the top right, and that is the balance of reflection with action. When we do that I'm not suggesting that we don't take action. Obviously, we need to. We need to get things done, right. We've got a project, we've got tasks, et cetera. But if we do insert more reflection time into our day that action becomes that much more prosperous and profitable and positive. But when we don't we just sit there, "doing" all the time. Then what ultimately ends up is less innovation, probably more absenteeism, less productivity, ironically, and we end up being more stressed.