Annie Duke has leveraged her expertise in the science of smart decision making to excel at pursuits as varied as championship poker to public speaking. For two decades, Annie was[…]
Go to Profile 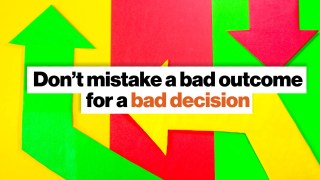 ‘Resulting’: Don’t mistake a bad outcome for a bad decision

Now, there were a couple of outlying voices, one of the main ones was a guy named Benjamin Morris over at FiveThirtyEight and he went through some of the analytics on the play and actually had very, very good arguments for why that was at worst reasonably thought through and possibly quite a brilliant play if you were just thinking statistically. It's easy to see what's happening here because all you have to do is the thought experiment. And he thought experiment is this: Pete Carroll calls to pass; Russell Wilson throws it is; and it's caught in the end zone for a touchdown. And just take a minute and think about what those headlines would have been the next day. Instead of worst play in Super Bowl history they would've been Carol outsmarts Belichick, it would've been about his creativity this is the kind of thinking that got him to the Super Bowl in the first place. This is why he's the best coach in the NFL and deserves that ring. Now, obviously whether the ball is caught or dropped does not actually change whether the decision was a good one, but we act like it does and that's what 'resulting' is.