Today’s guest is internationally best-selling author, speaker, and passionate advocate for reason and science as against superstition Richard Dawkins. From 1995 to 2008 Richard Dawkins was the Charles Simonyi Professor of the Public Understanding of Science at Oxford University.  Among his many books are The Selfish Gene, the God Delusion, and his two-part autobiography: An Appetite for Wonder and A Brief Candle in the Dark. His latest is a collection of essays, stories, and speeches called Science in the Soul, spanning many decades and the major themes of Richard’s work.

In this episode, which Dawkins described as “one of the best interviews I have ever had,” Richard and Jason talk about whether pescatarianism makes any sense, where morality should come from (since, as Hume says, “you can’t get an ‘ought’ from an ‘is’), the greatness of Christopher Hitchens, and the evils of nationalism. 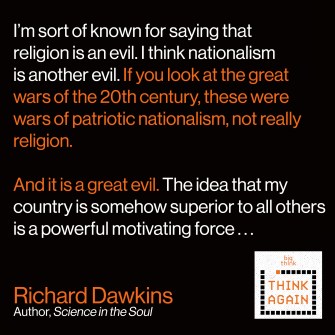 Joscha Bach on when AI takes over,

Eric Weinstein on hypocrisy as an intellectual virtue

“The pulsar sort of consumes the thing that recycled it, just as the spider eats its mate.”
Neuropsych

Your old-fashioned chronological age is just a number. Your biological age can tell you how healthy you really are.
Up Next
Technology & Innovation

Researchers are beginning to understand the relationship between black holes and galaxies.