Cosmic jellyfish might sound like the name of a really bad cover band, but in reality, these are galaxies whose tentacles of stars, gases, and cosmic dust stream forth from their central, galactic discs. They certainly aren’t alone. Curiosities and strange wonders abound in our vast, prodigious universe. Both professional and amateur astronomers alike have hollered “Eureka!” at such things as voorwerps, magnetars, blitzars, and “green peas.”

What else is interesting about jellyfish galaxies? Funny you should ask. The European Southern Observatory (ESO) has recently discovered that they fuel supermassive black holes. These enormous whirling vortexes each contain an “active galactic nucleus (AGN).” The AGN is the ultra-bright region at the center of a galaxy.

Although supermassive black holes inhabit the center of almost all galaxies, few are active. Exactly why has been a big question for astronomers. Another question is how galaxies accrete or gain matter. 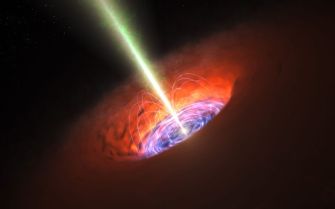 Artist’s rendition of a supermassive black hole. By ESO, via Wikimedia Commons.

Astronomers at ESO’s Paranal Observatory in Chile recently found out how AGNs accrete. Their report was published in the journal Nature. By using their MUSE (Multi-Unit Spectroscopic Explorer) instrument, part of the Very Large Telescope (VLT), the team found that a supermassive black hole sits at the heart of each jellyfish galaxy.

Newborn stars produce tentacles. Some of the gases are fed back into the galaxy’s center, causing its supermassive black hole to glow and shine in a way that few others do. To conduct the study, researchers observed nearby jellyfish galaxies, some with tentacles tens of thousands of light-years long.

The project was led by Bianca Poggianti of the INAF-Astronomical Observatory in Italy. She and colleagues discovered that these celestial appendages are formed through what’s known as ram pressure stripping. Gravity pulls galaxies close together at high speed, forming clusters. The intensity of this force demands a close proximity, which in turn causes a buildup of hot gases.

The gases soon become dense. The pressure builds and after awhile, it becomes too great. Once it reaches critical mass, starbursts go off within the galaxy’s core, sending gas-filled jets spewing out. From our vantage point, these jets look like tentacles. So it seems like some of these gases in the tentacles make their way back to the AGN, which how galaxies accrete useful material.

“This strong link between ram pressure stripping and active black holes was not predicted and has never been reported before,” Dr. Poggianti said. “It seems that the central black hole is being fed because some of the gas, rather than being removed, reaches the galaxy center.”

Poggianti and her team are currently studying many more such galaxies. They’ll look at 114 out of the 400 known cosmic jellyfish out there. 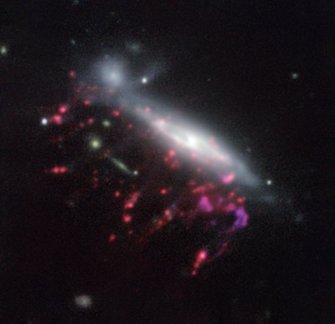 Example of a jellyfish galaxy. ESO.

This survey, when completed, will reveal how many, and which, gas-rich galaxies entering clusters go through a period of increased activity at their cores. A long-standing puzzle in astronomy has been to understand how galaxies form and change in our expanding and evolving Universe. Jellyfish galaxies are a key to understanding galaxy evolution as they are galaxies caught in the middle of a dramatic transformation.

To see more about the ESO’s discovery, click here:

It’s the “intersection of burnout, imposter syndrome, and anxiety.”
Up Next
Starts With A Bang

A planetoid colliding with Earth, analogous (but larger and slower-moving) than an impact between Swift-Tuttle and Earth would be. Image credit: NASA / Don Davis.No other object this large has come […]