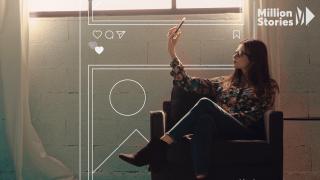 Science confirms what you already knew about being helpful to others.
▸
5 min
—
with
Big Think

MICHAEL NORTON: There's a cynical view of people that they are really self-centered and selfish and all they care about is themselves and they would never help anybody with anything unless they're forced to. And it's true that sometimes people are self-centered and selfish, of course. But when you think about the world, there's amazing, amazing generosity happening all the time. We just don't always build it into our sense of what people are like.

NARRATOR: There's a good amount of giving in the world, but wouldn't we be happier spending on ourselves instead?

MICHAEL: What's surprising is that we still think that the next thing that we buy for ourselves is gonna really make us happy. What we try to show is that some of the things that we're spending on now just aren't doing much for us and we can think about spending on different things and try to get a little bit more happiness out of that aspect of our lives.

NARRATOR: Could changing the way we spend money and giving more to others really make us happier? This is Your Brain on Money. This is Michael Norton. He studies human behavior at Harvard, and co-wrote a book called Happy Money: The Science of Happier Spending.

MICHAEL: When we tell people, "Hey, did you know that giving to other people can make you happy?", most people are not blown away. They understand, they've had experiences that make them happy, they understand the concept, but it doesn't occur to us that often to give instead of getting stuff for ourselves. And so it has to be a habit of mind that we encourage ourselves to give more often than we do. That feeling of having done something that counts in the world is one of the key predictors of why giving can pay off in more happiness.

NARRATOR: We know generosity can be rewarding, but what's really happening when we give time or money to others? This is Jenny Santi. She's worked for years in philanthropy and is the author of the book, The Giving Way to Happiness.

JENNY SANTI: When we help someone, we get a feeling of elation. It's basically nature's way of rewarding us. Kind of like the feeling we get when we run and we feel good, we feel happy. It's the same for when we help others.

NARRATOR: Science has shown that our brain releases rewarding chemicals when we exercise, but can the same be true for simply giving? In 2006, Jorge Moll and Jordan Grafman, both neuroscientists at national institutes of health, developed an experiment to measure our neuroactivity when we give.

JENNY: Grafman and Moll's experiments in the 2000s provide the very first evidence that the joy of giving has biological basis in the brain.

NARRATOR: Subjects were given a pool of money they were allowed to keep. A computer then gave them a series of causes that they could either donate to or keep the money instead. As they made their decisions, their brain activity was recorded by FMRI.

NARRATOR: If generosity is more reward than sacrifice, how can we all experience the joy of giving?

MICHAEL: One question that people often ask is where should I give to a charity? Should I give to a close friend or a family member or someone on the street who's in need? The short answer is all of them are good. So, any kind of giving that you do, again, is gonna be better than spending on yourself. What about time? Should we be giving time to other people? The research suggests that giving time does in fact make us happier. The issue is that it's much, much harder to do. If we say go volunteer, we get huge drop-off, because people have lives, they're busy. My hunch is that when you give time, it is more impactful on you. The issue is that there's a bigger barrier. So if you can't give time, at least you could give money so that you're being generous with at least one of your resources. What should I actually do right now to figure out if I'm giving the right amount and how can I audit myself so that I can see that I'm giving more? It turns out, it's really easy to do. So if you think of your credit card statement every month, you can really quickly say these were all me. These were me with somebody else. These are things that were really just purely giving. And we do see that when people stick to auditing themselves, they do in fact change their spending in line with their goals.

NARRATOR: Once we've made giving a part of our routine, how can we ensure the lasting impact of our happiness?

MICHAEL: So if money is going to a charity out of my bank account and I don't even notice it, that's not gonna have as big an impact on my life as if I'm thinking about who I'm giving to and why I'm giving to them and the impact that I'm having. And it's another kind of audit actually to think about when I am giving, am I giving to things that really, really matter to me? We want people to align the giving not to be so random, but to be very consistent with their core values. It's hard often to see that we had a tangible impact on something. One of the things that giving does is it gives us that feeling of having an impact.